In an election season that’s default setting has been “batsh*t crazy,”  it’s amazing that the assembly line of controversies keeps chugging along at such a steady pace. Yesterday, Donald Trump pointed out a supporter at a rally in Redding, California and championed him as “my African American.” It was a moment that had a huge chunk of observers cringing like they just saw their grandma go rogue at a Chinese restaurant. Well, Trump’s “African American” has heard the criticism and says he wasn’t offended by this peculiar brand of shout-out.

Gregory Cheadle was the man catching Donald Trump’s attention and he told Redding’s Record Searchlight that he was happy with his Trump rally experience. “To give the black folk the time of the day, I was happy,” said Cheadle who (surprise!) is a Republican running for Congress. He also shared that he ended up talking to Trump after the rally.

“I was at the point he was about to leave and I called out, ‘Uncle Donald, Uncle Donald,’” Cheadle said. “He recognized me as the guy he had called out.”

The two men exchanged a few words and Trump explained himself.

“You know what I was talking about? Jobs, jobs, jobs,” Cheadle said, paraphrasing what Trump told him. “I said, ‘Yeah, jobs.’ It’s all a fog. I’m glad I’m not on the witness stand. But it means a lot to me when a person of his stature can come to Redding.”

Even with the “Uncle Donald” gushing on Cheadle’s part, he would tell NBC News that he wasn’t a lock to vote for The Donald. (Although he certainly doesn’t sound like he’ll be choosing Hillary instead.)

“When you come from the inner city, seeing someone like Trump is so far removed from my thinking,” he said. “I wanted to see a presidential candidate. I’m open to attend his rallies, but I’m not necessarily going to vote for him.”

“I’m an 1856 Republican like the white Republicans back then who were trying to free the black slaves — fighting for the people, not corporations,” he added. “Hillary Clinton is all about power and money.”

The 1856 Republican branding is also front and center on Cheadle’s website. As is THE MIGHTY CAPS LOCK! 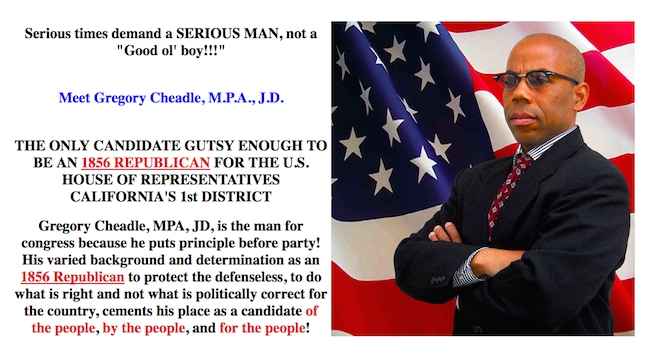