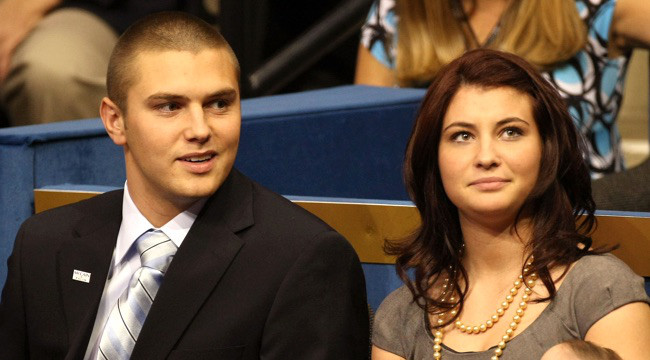 Former Alaska governor Sarah Palin’s son Track has reached a plea agreement on charges of assaulting his girlfriend in January. Per the Alaska Daily News, the case was taken up by the Anchorage Veterans Court at Track Palin’s request. Track Palin served in Iraq in the U.S. Army in 2008.

The agreement saw prosecutors drop a misdemeanor domestic violence assault charge and a misdemeanor interfering with the report of a domestic-violence crime charge. In exchange, Track Palin pleaded to misconduct involving weapons for being under the influence and having a firearm. Should he complete an alcohol-related treatment program, the weapons charge will be dropped but if he does not, he faces a 180-day suspended sentence and will be placed on probation for two years.

Track Palin allegedly punched his girlfriend in the face, kicked her and waved a gun around while intoxicated, according to the initial affidavit. He also allegedly threatened suicide while brandishing the gun. The gun mentioned in the affidavit was allegedly an unloaded AR-15 assault rifle. After being taken into custody, Track Palin was released on $1,500 bail.

Not long after the incident, Sarah Palin appeared at a rally for presumptive Republican presidential nominee Donald Trump and indirectly blamed President Obama for her son’s arrest. “Our vets, and you, deserve a Commander-in-Chief who would respect what our forces go through, and would never leave them behind. A Commander-in-Chief who would never lie to the families of the fallen,” she said.