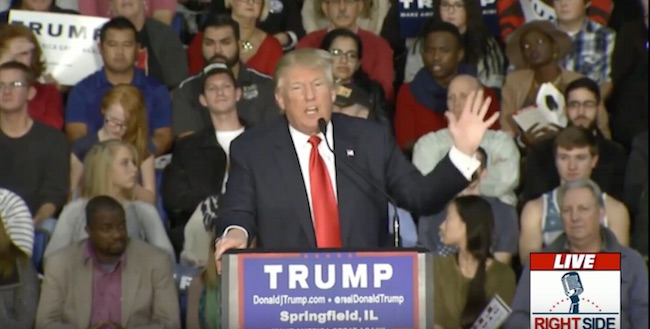 An unidentified woman made headlines earlier this week when she went to a Trump rally in Illinois and completely ignored our possible future president in order to read a book and check her cellphone. She even got into an altercation with a Trump supporter who decided that she should stop reading and pay attention to the speech. Now, Johari Osayi Idusuyi has come forward to discuss her experience and, despite the fact that the media outlets have suggested that she was there to troll the presidential candidate, she says that’s not what she was there to do.

In a conversation with Jezebel’s political sub-blog The Slot, Idusuyi said that she had gone to the Trump rally in order to “hear what he had to say.” What ended up happening, according to The Slot, is an “accidental protest that got its message across quite clearly.” And she didn’t wind up in the seats right behind Trump on accident. Idusuyi says she and her friends were first told that the seats were VIP and then, after turning around to find other seats, were invited to join the exclusive crowd sitting close to Trump. She was chosen, Idusuyi says, “for obvious reasons,” and even instructed to sit near the middle.

Here’s what she said inspired her to stop paying attention and start doing her own business at the rally:

The way the supporters treated the protesters was really unbelievable and that’s what made me mad. All four of us as a collective group, our energy shifted. The way Donald Trump said, “Get them out of here”—when you say those words, that activates your supporters to be able to be the same way. Then there was a man who snatched a lady’s Obama hat. She was one of the protesters and was leaving and her hair just went with the hat. Then he threw it into crowd and everybody cheered. I thought, “That’s bullying. That’s aggressive.” I don’t think Trump handled it with grace. I thought, “Oh, you’re really not empathetic at all.” That’s when the shift happened.

Instead of standing up and leaving along with the protesters, however, Idusuyi decided to use her position in the VIP section as a protest of her own. She was on camera and had just seen some people be disrespected, so she took out her book—Claudia Rankine’s Citizen—and began reading, showing Trump the same amount of respect she felt he’d shown his detractors. And when angry supporters tried to get her to stop? Well, she let them know what she was all about:

The woman kept saying, “If you don’t wanna be here, then leave. You didn’t even stand for the Pledge of Allegiance.” I said, “I do want to be here, that’s why I’m here. You don’t know who I am. I’m reading my book because I’m uninterested. Did you not just see what happened? This person disrespects women, minorities, everybody, and you’re still supporting him. He’s not saying anything of substance.”

Everyone’s right about one thing, though: If Idusuyi wasn’t a Trump supporter before she came to the rally, she’s definitely not checking his name off on the ballot when it’s time to cast her vote.