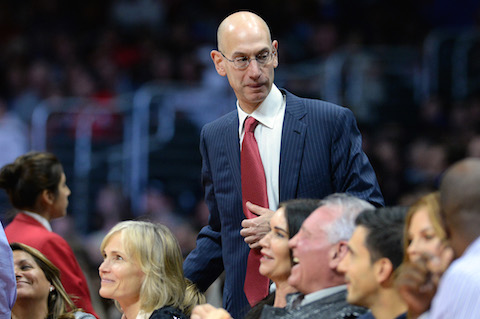 Adam Silver didn’t want to choose between DeMarcus Cousins and Damian Lillard as injury replacement for Kobe Bryant on the Western Conference All-Star team. The commissioner’s hope going forward is that such a difficult decision won’t have to be made at all. In a recent interview, Silver said that he’s in favor expanding All-Star rosters from their current number of 12 players.

Silver made the remarks to ESPN Radio’s “NBA Lockdown: Insiders” show on Sunday evening. He used last week’s relative controversy of Lillard getting left off the All-Star team as justification for his wish, and also explained his reasoning behind naming Cousins to replace Bryant.

“That I had to decide between DeMarcus Cousins and Damian Lillard. I didn’t like having to make that choice. I wish I had another slot for Damian because I think he’s deserving of being an All-Star as well.?

“I rely heavily on our basketball folks in terms of where the coaches’ [voting] came out. Of course there’s a fan vote for the starters and the coaches choose the reserves. DeMarcus was very high up on the coaches’ vote, so that had a strong influence on me. Ultimately I deferred to them… It was essentially a tie in my mind, so I ultimately deferred to the coaches.”

Asked specifically about expanding the rosters in the respective conferences to 13 or even 15 players, Silver said: ?”I think that’s something that will get very strong consideration. I think that’s an issue that we’ll end up discussing with the Players Association.

NBA teams have been allowed to carry 13 active players on nightly rosters since the CBA was ratified in 2011. All-Star teams are currently made up of 12 players, and there’s been a groundswell of support among league followers in wake of Lillard’s exclusion to adjust their size to match game-day counterparts.

While Silver is in favor of the overall idea, he’s sure to note that it’s not his decision entirely – this is a collective bargaining issue.

The commissioner also says he reached out to Lillard and explained his decision to go with Cousins:

“He was disappointed, but he understands,” Silver said of Lillard. “When I say he understands, he doesn’t agree with me, but he’s been in this league for a while now and he understands that’s how things go. I think he’s equally disappointed with the coaches because I was the third-tier as a selector. The fans and the coaches went first. I’m sure he’s going to continue to demonstrate on the court why he deserves to be an All-Star.”

Lillard told reporters he was “pissed off” off after the coaches didn’t select him as a reserve, then went one step further in a since-deleted Instagram post ‘thanking’ Silver and the coaches for extra motivation once it was announced Cousins was heading to New York.

The All-Star Game is February 15 at Madison Square Garden.