National teams comprised of mostly NBA players have an obvious advantage over their opponents. It’s no coincidence that the United States has utterly dominated FIBA and Olympic play since the league allowed its stars to perform on the international stage in 1992. But there’s an inherent detriment to utilizing rosters filled with top-tier talent for the most fortunate countries, and its one that came back to bite the Americans just past the turn of the century: A lack of continuity and comfort compared to the competition.

Canada is experiencing that necessary evil at the ongoing FIBA Americas, a qualifying event for next summer’s Rio de Janeiro Olympics in Rio de Janeiro. Coach Jay Triano, an assistant with Portland Trail Blazers, has nine NBA players at his disposal in Mexico City, including reigning of Rookie of the Year Andrew Wiggins, former No. 1 overall pick Anthony Bennett, and Boston Celtics big man Kelly Olynyk.

Without question, Canada is the most talented team in the tournament. But inexperience and unfamiliarity has caught up to our northern neighbors regardless, as evidenced by an opening game loss to Argentina and frequent defensive missteps that simply shouldn’t take place with any regularity at this level of the game. Offensively, though, the Canadians have thrived, relying on athleticism, dribble penetration, and difficult shot-making to put up points with relative ease.

When Triano’s team stays true to their called offensive sets, though, it’s something close to dominant – as this high-flying alley-oop finish by Bennett in an easy win over Venezuela makes abundantly clear. Canada has run this play to success in each of its three Americas games thus far. Its crux is performed in the NBA on a regular basis, a nuance called “shorting” the pick-and-roll that takes advantage of a scrambling defense to produce an easy layup.

The set begins with Bennett setting a high ball-screen for Corey Joseph. As the man guarding the Minnesota Timberwolves forward corrals the ball, Bennett quickly dives to the rim. Olynyk, stationed on the strong-side block as the first action begins, dashes toward the elbow to receive a pass – “shorting” an expected dish from Joseph to the roller. 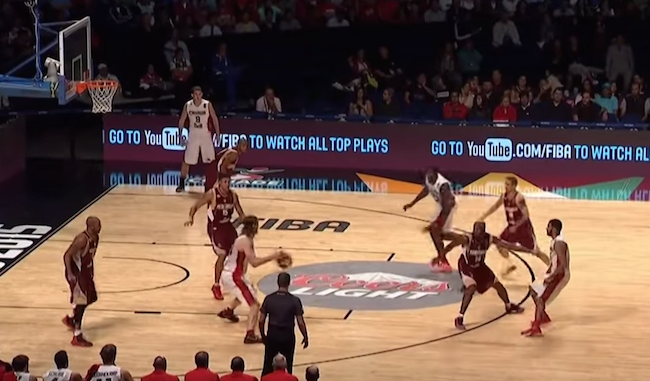 That eventual pass puts the last line of defense in a questionable position: Should he tag the roller or stay attached to a shooter in the far corner? Triano makes that decision even more difficult by stationing Nik Stauskas, an absolute marksman, opposite the play. The Venezuelan guarding Stauskas sticks to him, and Olynyk’s man takes the bait by following the Celtics big to the elbow.

And there’s your highlight-reel. The Canadians also pulled off the exact same feat against Argentina, a much more formidable opponent, two days earlier.

These plays are what will spur Canada to the exalted basketball heights they’ve long sought to touch. A combination of talent and execution is hard to come by for international teams laden with NBA players, but the payoff of that amalgam is certainly tough to beat – and the Canadians have a great chance to prove it not only this week, but in coming years, too.