by: Jack Winter and Spencer LundFacebookTwitterFebruary 17, 2015

The 2015 NBA All-Star Weekend was filled with some incredible moments, but not all of the NBA’s cream of the crop rose to the top. Some were victims of bad luck, or inexperience. Others continued what has been a laborious crawl towards the end of the season. These five moments made you cringe, guffaw or roll your eyes as fans had to remind themselves this was still All-Star Weekend.

The Clippers’ dangerous-from-deep shooting guard and amateur poet participated in his first Three-Point Shootout on Saturday night against a hugely talented field. Redick didn’t advance to the final, but he set a record — oh sorts.

Just found out that I set the record for most long 2s in a 3 Point Contest. Ever. Couldn't be prouder.

On Redick’s fourth rack of balls, he was whistled for stepping on the line, and in one case, from inside the three-point arc. He was penalized two buckets in the moment, and he was docked a third bucket on a review after a finished. He finished with a total of 17 .

Even if his long two-pointers had counted, he wouldn’t have advanced to the finals: Kyrie Irving and Stephen Curry were the cut-off with 23 first-round points.

Redick jumps forward on his three-pointers, and it takes time to go back and reset behind the arc when that’s your natural shooting motion, but he is connecting on 42.9 percent from deep this season, which is the ninth highest in the league.

We felt bad for everyone involved because the Degree Game Changer battle was something we’d been looking forward to for a few weeks.  The idea was sound: let two of the game’s best point guards go at one another during the normally light All-Star practice on Saturday. No one could have predicted they’d shank almost every shot during the muddled mid-court encounter.

After both went 0-for-0 on the first three shots, the All-Star points were reduced to putting up crossover threes on Michael Rappaport to settle a winner while media members turned to each other and asked what the hell they just witnessed.

Wall won, but we all lost.

After admitting it was “very likely” Sunday’s All-Star Game will be his last this season before he undergoes surgery and shuts it down, Carmelo had an opportunity for a  final HUZZAH to the MSG fans during an otherwise regrettable 2014-15 campaign. It didn’t happen.

Anthony’s season of misery continued, and it was compounded by how many minutes (30) he played while chucking his way to a 6-for-20 shooting night and a There Will Be Blood shot chart. 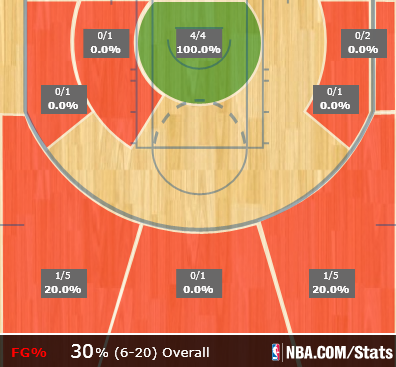 Two of Caramellow’s 14 misses came on a pair of open three-pointers in the final 15 seconds that could have provided the East a better chance at a win. You could hear them clang off the iron from our perch in the 200-section.

We also can’t forget his inability to catch a swing pass from John Wall during a light All-Star run-through without defenders on Saturday.

‘Melo is like us: he needs a long nap. He’ll have plenty of time once he has surgery, though.

Some will blame Zach LaVine for setting an unfair standard during Saturday’s electrifying Dunk Contest, but the “Greek Freak” has no one to blame but himself. First rule of a Dunk Contest is you talk about the dunk contest, or at least have a teammate do it.

Giannis did have a toga-clad woman bring out a Greek flag before his first dunk, and his brother, Thanasis Anteotokounmpo, was involved in his second one, which he actually flushed.

But you gotta bring the ruckus on that first dunk, and everybody’s favorite baby-faced Go-Go-Gadget hybrid guard/forward was done after one round following three straight misses on his initial attempt.

His brother learned that lesson before throwing down a big one in the D-League Dunk Contest the next day.

Despite the performance, “The Alphabet” was chill about it afterwards: “It was fun.”

You can go here to watch the Grey’s Anatomy Xoc bend his leg the wrong way during the 2015 NBA Celebrity Game; we’re already a little sick to our stomach after watching ‘Melo shoot the ball on Sunday. But Williams is OK as he noted on Instagram after the game:

Kevin Hart also won his fourth consecutive Celebrity Game MVP, which is voted on by the fans. But should the MVP really be involved in these two clips?