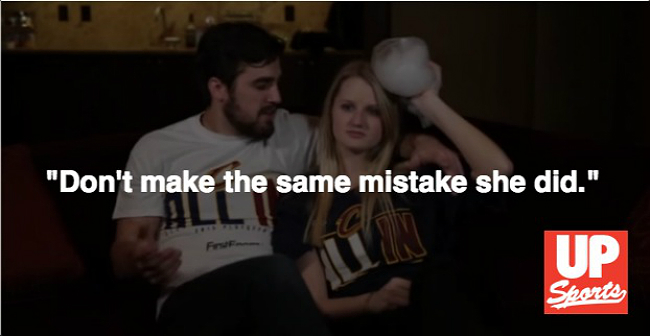 On the surface, there’s enough to roll your eyes at, the insincere laugh at it being “their song,” or the idea that two people in a relationship know each other well enough to have a song that also requires choreography, but somehow does not know the others’ favorite basketball team. I mean, they barely make an effort to get the choreography right, and anyone who’s seen Dirty Dancing should know that’s not even close to being right.

The responses have been pretty fair in calling out the more sinister tone of the video. Multiple sports outlets have already taken the team and the creators of the video to task, including our own Spencer Lund. When a video shows a guy hurling his girlfriend across the room for liking a different team than him, then her writhing in pain on the floor as a result, then wearing a Cavs shirt and holding an ice pack to her head with the tagline “Don’t make the same mistake she did,” you don’t have to think too hard about what that’s suggesting.

The backlash to these tweets or articles suggesting that the video is tone-deaf and offensive, however, has made it pretty clear that thinking logically is not these people’s strong suit. From “Just relax, it’s funny!” to “Twitter police are ruining my sports!” this video has really brought out a who’s who of people who have not been affected by domestic violence, yet lack the empathy to really examine how letting an American sports team use violence as a joke could possibly get any kind of negative reaction.

“Only a small group of of people are offended!” Okay, let’s look at some fun U.S. statistics culled from the National Domestic Violence Hotline and the Centers for Disease Control and Prevention:

– The number of women murdered every day by a current or former male partner: Three
– The people per minute who are victims of physical violence by an intimate partner: 20 (over 10 million per year)
– One-quarter of women, and 1/7 of men will experience physical violence by an intimate partner in their lifetime
– A woman is 70 times more likely to be murdered in the few weeks after leaving her abusive partner than at any other time in the relationship.
– Women ages 18-24 and 25-34 generally experience the highest rates of intimate-partner violence. (Note: Nielsen survey statistics show that 45 percent of the NBA’s audience is younger than 35, the youngest audience in mainstream sports)

These are just a few of the terrifying statistics that more than prove the epidemic of domestic violence. While it may not have affected you personally, it happens every day, and it’s more than likely affected someone you know. These statistics can be broken down even further by violence against minorities and the trans community, where even scarier statistics increase exponentially.

The culture of accepting violence against women in sports is even more toxic. Collegiate rape-case cover-ups still lead to draft eligibility, and clear video evidence seems to do nothing to stem the tide of victim blaming, from fandom to franchise personnel.

Everything will get swept under the rug and eventually forgotten if you’re good at throwing a football, or punching a guy harder than he punches you, or if you can nail a three-pointer. Male athletes are idolized, and, in the process, women become just as much a commodity as the guys’ expensive cars, big houses, and custom Jordans. And when you tell others to just relax and chill out, you’re saying that you approve of this, and you’re happy to be complicit in a system that elevates these people above the law, and above public reproach.

This reaction in particular is funny to me, and not just because there are people who legitimately think using one of the largest public platforms on the internet to voice your concern is something completely outrageous. I love the idea that women — and decent, normal dudes who don’t think putting your girlfriend into traction because she loves another basketball team is a good idea — have some kind of secret Social Justice Warrior algorithm specifically programmed to find places on the internet where “men are having fun,” or “boys are being boys.”

Hour after hour of arduously searching for something to feel bad about, like we don’t have every single major media outlet in some way fetishizing and objectifying us, or talking down to us and doing everything they can to ensure that we remember we’re inferior. Women aren’t even given the autonomy to decide what they can and cannot do with their bodies by the U.S. government, but why waste time with that when there’s a dude in Kansas who’s making a rape joke to his 34 followers? Better sound the Social Justice Warrior alarm! (The SJW call-to-action alarm is just a Muzak version of Ani DiFranco’s Every State Line, FYI.)

Let’s get real: The only “mindless mobs” I ever seem to come across are dudes, who do not follow me and who I have not interacted with before, getting all up in my mentions, desperate to explain sports to me, explain why I’m wrong, or tell me how not offended they are. I mean, I should be more like them and stop thinking that casual depictions of sexual and physical violence normalize real and dangerous issues, right? I should stop drawing on my own personal experiences and let these bros I’ve never met redirect the narrative. It’s definitely better their way.

Yes, I said my experience. You will also find that this is the experience of every male sports writer (we have lots of them; feel free to poke around and ask) who dares make the suggestion that domestic violence is wrong, or even other wackadoodle ideas like “maybe don’t be racist!” or “gays, they’re people too!”

It’s true that women are much more emotional. Remember that time we as a wholly female collective got so mad over video games that we flooded creators with hate speech, rape and death threats, doxxed them (and their families), SWAT-ed them, and then forced them out of their own homes over concerns for their physical well-being? Oh, wait…

The fact is, I was asked to address this from a female perspective, but my perspective shouldn’t be (and isn’t) that much different from anyone else — regardless of race or gender — with basic common sense. What the Cavs did was a poor attempt at humor built on the idea that the most effective relationship tool is physically injuring your significant other until they agree with you, then “apologize” and shoulder all the blame, thus freeing you from responsibility.

We all know that the worst thing you can do is demonstrate accountability for something you did where everyone can see it, right?