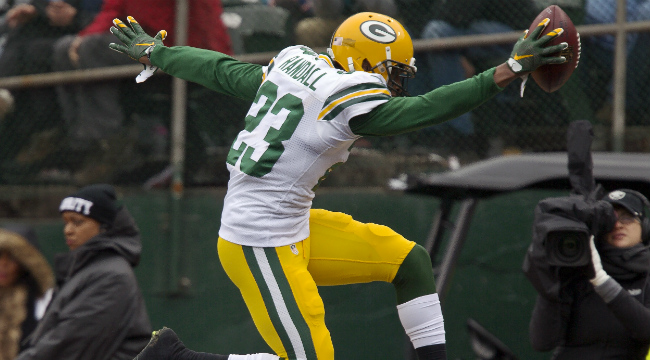 Damarious Randall has just over 154,000 followers on Twitter, but last week, he sent a tweet that defied the odds in surpassing one million retweets in four days. What was Randall’s secret? Easy: Make a seemingly-innocuous doable promise if the tweet had gained as much traction as he had expected. However, that quickly turned into an impossible promise: Buying and sending over one million NBA jerseys.

Because of the viralness of the tweet, you likely already know its contents, but here it is anyway.

Randall’s confidence in the Golden State Warriors defeating the Cleveland Cavaliers in the NBA Finals — a sentiment echoed by essentially anyone who watches basketball or has even overhead a single conversation about the playoffs — caused him to make an error in at least estimation, if not judgment. “I’ll buy everyone who retweet’s [sic] this a jersey…” if the Cavs win the championship, proclaimed Randall.

What were his odds of ever accomplishing that?
At 100 retweets, Randall could pull off the feat of buying the jerseys. At 1,000, it starts to get expensive for a player who will make $1,514,418 with the Browns this year. It’s a large sum for most of us, but after paying taxes, agents, and the normal increased financial expenditures of a professional athlete, that figure dwindles quickly. At 1,000 jerseys, if Randall spent even $20 in buying and sending each one, that would be $20,000 spend on an impulsive tweet, one the he finally conceded had to be a “joke” well after it crossed 100,000 retweets.

But 100,000, let alone 1.1 million, was exponentially more than Randall could have ever handled.

The top-selling Cavs jersey at the NBA team store is a $69.99 LeBron James (obviously) “fast break replica.” I have no idea how a person would start to sort out jersey sizes for a million people (let alone 100 people), but I chose a large and added it to my cart. There is free shipping on orders over $49 — no problem for Randall, as his order would have easily cleared $10 million from my early guesstimates — and while I have no promo code, maybe Randall’s could be “WHOOPS4GOTLEBRON.”

To put that into context, that’s a tiny bit more than half of the $150,000,000 that Matt Ryan just received in his league-record contract with the Atlanta Falcons. If Ryan somehow earned every penny of the five-year deal, he’d basically have to spend all of his post-tax take-home pay on fulfilling a promise to send jerseys to over a million people. Of course, Ryan didn’t make that promise and he isn’t the one on a rookie contract for a recently-traded cornerback.

Of course, Randall could always cut costs by finding the cheapest Cavs jersey possible. The problem there is that you won’t find 1.1 million jerseys on Ebay, and there’s not even a guarantee that 1.1 million Cleveland jerseys even exist on the market en total, especially if you were cutting costs by getting any jersey that wasn’t of the LeBron variety; I can’t imagine that the NBA has sold anything close to a million non-LeBron jerseys in the most recent LeBron era.

The cheapest Cavs jersey on Amazon is a “youth” version for $10 before taxes and shipping. This would be a nice way for Randall to work his way around the $77,000,000 figure while still technically fulfilling his promise, but even in a miracle world of getting a Costco-style wholesale discount at $1 per, he obviously can’t spend $1.1 million in a single purchase; Randall made exactly $1,154,612 with the Green Bay Packers last season. Even the most frugal version of Randall doesn’t have that kind of dough.

If Randall had waited long enough to see J.R. Smith hand Game 1 over to the Warriors, perhaps he could have kept doubling down on his promise, knowing that he’d never have to fulfill it anyway. I’m not sure exactly how he would have ever gotten 1.1 million addresses anyway.

That would be a lot of sliding into DMs, even for a professional athlete.