Could DeAndre Jordan’s Free-Agency Flip-Flop ‘F*ck Up The Whole League’?

The NBA might experience a cataclysmic change to their free-agency period after the events of July 8, 2015. It was the day before the end of the NBA’s free-agency moratorium, and DeAndre Jordan’s ambivalence over his future led to an all-hands-on-deck call to his Clippers teammates that resulted in him reneging on an earlier verbal agreement to sign with the Mavericks and instead re-sign with the Clippers.

So how will DJ’s stunning, last-second reversal change things for the NBA moving forward? One NBA executive thinks it’ll “f*ck up the whole league.”

On prospect of DJ back to Clippers, triggering other deals to change, "This could [F] up the whole league" – off record NBA exec

Before we attempt to answer that unanswerable question (only time will tell), first let’s explain why the NBA has a free-agency moratorium. During that time of the year, no contract can be signed, but players are free to conduct meetings with teams and give a verbal form of commitment to them before they sign the paperwork when the moratorium ends. That verbal commitment used to be as good as a signed contract, at least for other teams. See where we’re going with this?

As the CBA makes clear, verbal agreements in early July don’t count toward the cap, since the cap for the upcoming year is still being figured out during the moratorium miasma. The number itself for the 2015-16 season only broke a few hours before the moratorium was to lift. 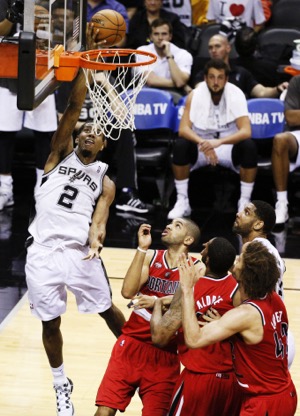 This is how Kawhi Leonard was able to verbally agree to re-sign with the Spurs for the maximum allowable under the CBA, but San Antonio was still able to lure LaMarcus Aldridge in free agency. If San Antonio’s verbal agreement with Kawhi had counted against the cap, they wouldn’t have enough room to sign Aldridge.

But verbal agreements count towards the cap at any point outside of that brief moratorium stretch in the NBA calendar.

So here’s the fear after Jordan eventually re-signed with the Clippers some time after midnight Wednesday evening: If NBA teams can successfully poach players who have verbally agreed with another team during the moratorium, it will turn the NBA moratorium period into a free-for-all. Like Russia’s economy in the 1990s after communism fell (nothing to see here, Mikhail, so just move along), poaching opposing players — even after a verbal commit — will become the norm. Rumor and innuendo will reign supreme.

This could be a big problem, and for the old guard covering the NBA, it’s embarrassing. The emoji war on Twitter yesterday had everyone laughing, but the NBA looked really foolish in the process.

For younger media types, it’s just the type of thing to amp up the entertainment factor when the majority of the big-name free agency pieces are already locked up (except in the case of DJ, of course).

And the DJ mess WAS funny; the race to see him in Houston WAS exciting. But when the NBA is tethered to what is now an outdated mode of doing business, teams like the Mavericks get screwed, and the NBA looks really unorganized and foolish in the process. We’re NOT in favor of that because the NBA is the only reason we even have a job.

Arguing on behalf of Shark Tank billionaire Mark Cuban always makes us want to take a shower. White billionaire males don’t need anyone to defend them. We’re almost always on the side of the players because they’re the driving force behind the NBA’s popularity, and — unlike the majority of our fellow plebs, who only see the dollar sign attached to a player’s deal — we know NBA stars are woefully UNDERpaid.

But the Mavs got screwed, and the Clippers aren’t really to blame. The NBA is, and that’s a serious problem. The prognosis that DJ’s 180 will “f*ck up the whole league,” is likely embellishment, but not as much as most would have you believe.