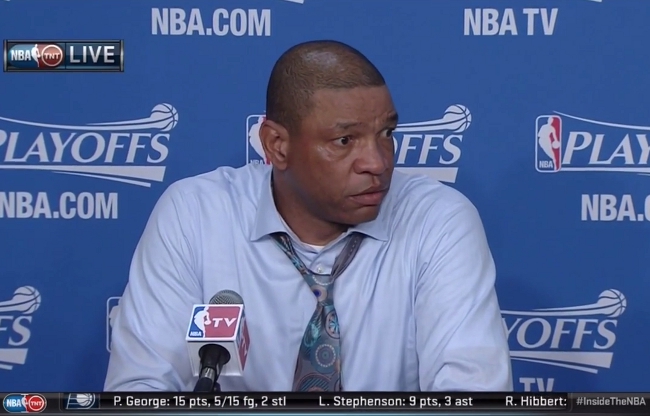 These days, Doc Rivers hasn’t met a squabble he doesn’t like, whether he’s acting like a petulant child every time a call doesn’t go his way or (albiet hilariously) mocking Draymond Green and helping to perpetuate “Bump-ghazi.” And his recent prickliness this season has been exceeded only by a level of nepotism not seen since the Kennedy administration, i.e. wrangling up herds of his washed up former players (Glen Davis, Hedo Turkoglu, Nate Robinson), not to mention awarding substantial playing time to his own offspring.

On top of that, Doc has been actively campaigning recently for DeAndre Jordan as the front-runner for Defensive Player of the Year, despite the fact that just about every NBA outlet, including us, disagrees with that assessment. So it’s no surprise that he took considerable umbrage with ESPN’s Tom Haberstroh, who wrote a piece earlier this week simply reiterating the fact that Jordan is not, in fact, the most viable candidate for DPOY:

“Unfortunately for Rivers, Jordan’s DPOY case isn’t much of a case at all. This screams confirmation bias on Rivers’ part more than anything. All evidence suggests Jordan is a good defensive player; not a great one, and certainly not the best. Let’s run through all the reasons.”

Haberstroh goes onto catalog the reasons, but the part that really got under Doc’s skin was the fact that Haberstroh completely overlooked Jordan’s considerable rebounding prowess.

Except, of course, that Haberstroh actually spent more than 250 words discussing DJ’s dominance on the boards, which is something Doc would have been aware of if, you know, he had actually read the article.

Doc Rivers admitted he had not read story by @tomhaberstroh and was fed excerpts by the team's PR staff.

Doc and his Clippers have managed to hold their own in the brutal Western Conference without star big man Blake Griffin, who’s been out with a staph infection for more than month now, so he’d do well to focus on gearing up for the playoffs rather than all this off-the-court chatter.