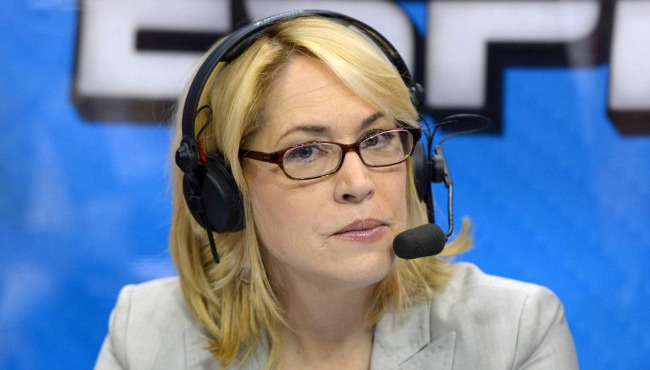 Doris Burke is an ESPN sideline reporter and color commentator who has been covering the WNBA, NBA, and college hoops for over 25 years. Drake is a famous rapper and Toronto Raptors fan that has had 10 top-10 singles over his career.

These two sure don’t seem like they have much in common, but the heart wants what the heart wants, and the 29-year-old Drake apparently made a pass at the 50-year-old reporter during a recent Raptors playoff game in Toronto.

Burke sat down for an interview with New York Magazine‘s Rembert Browne, and while she spoke about several more serious topics like the sexism she faces on a daily basis and her role as a trailblazer for women in sports media, she also told the spectacular story of her interaction with Drizzy himself.

Can I tell you something about the last time I was there? I just could not believe this happened. Drake turned around — my seat at game six was right behind him — makes a heart shape [with his hands], and points at me. I’m looking around behind me to see who’s there, turn back to him, and then he points and he does it again. I texted my daughter and said, “You need to know Drake just did this to me.”

It sounds like Drake was (probably) just messing around, but who knows? Maybe there is a brewing romance there. After all, one would think he would appreciate a woman he could talk Raptors basketball with, and there are very few more knowledgeable than Doris Burke.