GIF: Mike Conley Crossover Burns Bledsoe, Or Was It A Wily Marc Gasol? 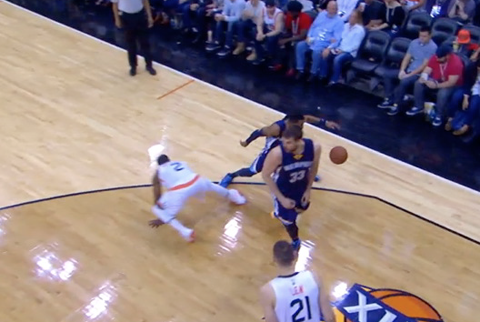 The Grizzlies escaped with a win last night after Jeff Green‘s three-point play and a game-sealing block by Marc Gasol. Besides the protecting the win with the game-winning block, the 2015 NBA All-Star Gasol may have also played a hand in Mike Conley‘s abusive crossover on Eric Bledsoe.

Looking at this in real time, it appears like Conley smoked Bledsoe with a crossover in the corner that led to a swish on a wide-open baseline jumper.

But after further inspection, it seems Gasol may have stuck his foot out to trip Bledsoe up right at the point of the crossover.

Still doesn’t discount the handle of Conley, and as one of Dime’s co-founders always says, it doesn’t matter what leads a defender to trip, it’s still an ankle breaker if it comes within the flow of the game.

We’re not always in agreement, but Conley’s crossover was electrifying and Bledsoe could only stand askance and watch him score the bucket.

Did Conley burn Bledsoe straight up, or did Gasol trip him up?