Check Out The ‘Inside The NBA’ Crew With Their Little Kids, The Cast Of ‘Entourage’

The cast of Entourage stopped by the set of Inside the NBA last night in Cleveland, when the Cavs won the Eastern Conference Finals in less-than-dramatic fashion. What was pretty dramatic was the height discrepancy between the Entourage bros and the Inside the NBA cast.

Which is what made Shaq’s 4-on-4 challenge to the stars of the upcoming Entourage movie so ridiculous. We’re pretty sure our mom is taller than Turtle. Just look at how tiny they look crowded around the TNT table on the Inside the NBA set last night: 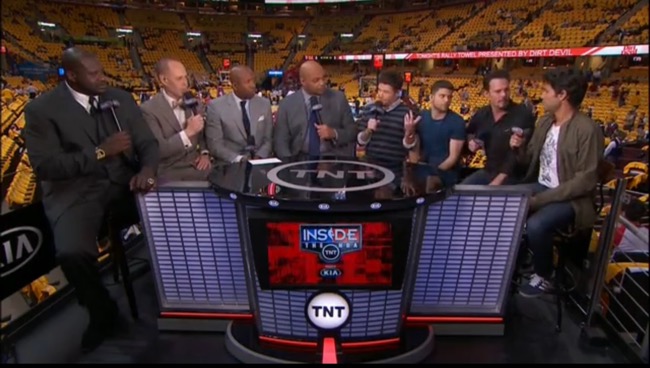 Plus, the Entourage crew even got to hear Shaq drop an innuendo-laden line about UFC Women’s Bantamweight Champion Ronda Rousey without realizing what he’d inadvertently alluded to.

Everyone on Inside the NBA is the fun uncle in your family, so the cast of Entourage can now be your fun teenage cousins and nephews… who aren’t quite adult size.

The Entourage movie drops on June 3, but the Inside the NBA crew is now on vacation.