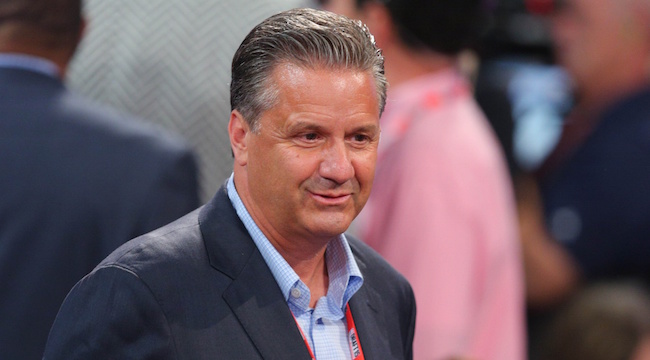 The University of Memphis was all set to honor former head coach John Calipari for his upcoming entrance into the Basketball Hall of Fame. Memphis fans, and everyone else who wasn’t on the board that decided to honor Calipari, were anything but ready to honor the former coach. It’s understandable, somewhat, seeing as how Calipari left the school just as scandals started popping up around it and him – most notably Derrick Rose’s academic misconduct, which led to the university vacating a Final Four appearance. Memphis, responding to the backlash over the former coach’s commemoration, decided to nix the ceremony. Here’s the statement from the university’s president, Dr. M. David Rudd:

Here is my response to our University and Community. pic.twitter.com/A8yx1ZlVDd

Cal coached Memphis from 2000 to 2009. During that time, he led the school to a Sweet Sixteen, two Elite Eights, and the National Championship game. Again, that appearance was officially vacated, but since when has that ever mattered? The game still happened, the school still raked in massive amounts of money as a result of all of Coach Cal’s success. It may be officially stricken from the record books, but not from actual history (the NCAA isn’t that powerful, despite what they may think). Do Cal’s infractions outweigh the tremendous coaching job he did at the school? In time, maybe it won’t, but for now, it appears as if that truly is the case for the Memphis faithful.