Julius Randle On Whether He’s 100 Percent Recovered: ‘I Believe I Am’ 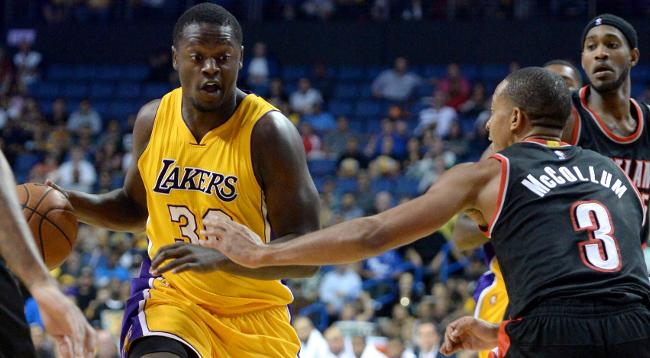 Injured Lakers rookie Julius Randle believes his recovery from the broken tibia he suffered at the beginning of last season is going well and that he’s close to 100 percent. Via Bill Oram of The Orange Country Register:

“The last time I checked probably about a month ago, the bone was 95 percent healed. I feel great.”

Barring any setbacks, Randle is expected to participate in the Las Vegas Summer League in July in preparation for the Lakers’ training camp in Hawaii in September and the start of the 2015-2016 season next October.

With the upcoming NBA Draft, Randle was also asked about the possibility of being paired up in the front-court with a fellow Kentucky Wildcats alum, Karl-Anthony Towns, who is expected to be taken with either the first or second pick.

“It wouldn’t be bad at all,” Randle said, laughing, on Thursday.

Los Angeles holds the number two pick, so this will ultimately depend on whether the Minnesota Timberwolves choose Towns or Duke big man Jahlil Okafor with the first overall pick. One thing complicating matters a bit is the fact that Towns is opting not to participate in any pre-draft workouts but instead will meet privately with both the Wolves and Lakers – and only those two teams – in the lead up to this summer’s draft.

There have also been reports in recent weeks that the Lakers aren’t set on drafting either Okafor or Towns. According to the New York Post, the Lakers’ brass has also expressed interest in a pair of lottery point guards: Emmanuel Mudiay and D’Angelo Russell.

In our most recent mock draft, DIME has the Wolves choosing Towns, which would leave the Lakers with the difficult decision of whether to try to pair Okafor with Randle in the front court, neither of whom can effectively stretch the floor the way Towns can.

The Lakers also need to decide whether or not they feel drafting another point guard will ultimately stunt the considerable growth of Jordan Clarkson, who transformed into one of the team’s best players, not to mention one of the few bright spots in a season marred by all sorts of turmoil. On the other hand, Clarkson could potentially be turned into something of a combo guard who could ideally play alongside another point guard.

Whichever way they go, being forced to choose between a handful of lottery studs is a pretty good problem to have.