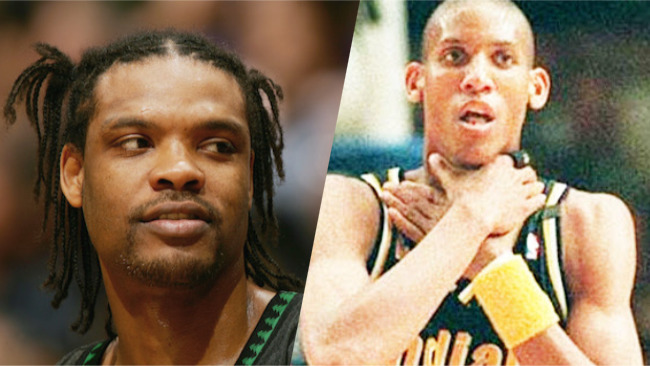 Latrell Sprewell made five All-Star Games and one All-NBA team in his career, but he’s still remembered best for the more infamous moments of his career. You know, like the time he choked his head coach, P.J. Carlesimo, or the time he turned down a three-year, $21 million contract because he said it wouldn’t be enough to feed his kids.

However he still had a successful and eventful career, so it would make sense that Michael Rapaport would track Spree down for a lengthy conversation on his podcast. Since the actor is a Knicks fan, the conversation was largely about Sprewell’s time in New York, which naturally, turned into talking trash about Reggie Miller.

Miller’s run-ins with the Knicks and their fans in the ‘90s are well-known. ESPN made an entire documentary about it. The conversation between Rapaport and Sprewell touched on the 1998-1999 season when the Knicks made a run to the NBA Finals, which included beating Miller and the Indiana Pacers. Here is what Sprewell had to say about Miller:

“Reggie is a talker. The thing I hated about him is he was a flopper. He’ll just flop and I am like, ‘Stop flopping, man.’ You can’t touch him, he’s always at the free throw line. But you have to respect Reggie, he’s always running around screens, and if you left him open, he’s going to knock down shots. You just have to be careful how you guard him because if you touched him, he’s going to act like he got shot out of a cannon.”

Sprewell isn’t the first player to accuse Miller of being a flopper during his NBA career, and he was most definitely a talker. While both Miller and Sprewell have been retired for years now, some bad blood never goes away.