Monta Ellis’ Happy Honeymoon In Dallas Is On The Ropes 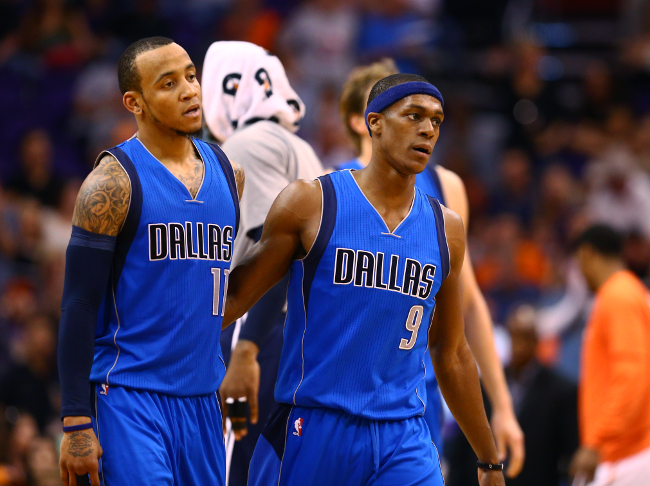 During an episode of Mad Men Season 7 that aired last summer, there’s a scene in which our complicated protagonist Don Draper is (conveniently) seated on an airplane next to a widow played by Neve Campbell. He’s confiding in her (albeit vaguely) about this extramarital dalliances and at one point during his lamentation whispers the line “I really thought I could do it this time.”

That’s how we felt about Monta Ellis after he resurrected his career in Dallas last season. We really thought things would be different this time around, that Ellis’s new-found maturity along with his rather seamless integration into the Mavericks’ schemes would provide a happy ending to what has more often than not been a tumultuous career for the enigmatic guard.

But with Dallas reeling and everybody searching for answers (i.e. someone to blame), it was almost inevitable that Ellis would once again find himself in the cross-hairs, whether or not his responsibility in all this has any basis in reality.

For a while, it was Rajon Rondo who looked like the obvious scapegoat, given his less-than-ideal fit in the Mavericks’ offense, but it’s becoming increasingly clear that it will be Ellis who ends up taking the fall, given a new report from ESPNDallas.com’s Tim MacMahon who claimed yesterday – without naming any names, mind you – that people within the organization are becoming more and more concerned about Ellis’ attitude and its effect on team morale.

“Regardless of whether anyone will admit it on the record, Ellis is a big part of that problem. Folks in the Mavs organization have been fretting for weeks about the impact Ellis’ moodiness has on the team’s soul.”

Some of this seems like little more than his reputation preceding him. True enough, things got dicey with Ellis in Golden State during the emergence of Steph Curry in terms of him not wanting to share the spotlight with a fledgling star, and it was ultimately Ellis who was left by the wayside. We all know how that’s worked out. And sure, a similar thing happened in Milwaukee before he caught on in Dallas.

But to many people’s surprise, things went swimmingly for him last season as he and Dirk Nowitzki paired up to make a deadly combination in the pick-n-roll, so much so that they almost (almost!) upended the eventual champion San Antonio Spurs in a first-round barn-burner series that they pushed to seven games – by far the biggest threat the Spurs faced all post-season.

Even until just a couple of months ago – and coincidentally, the trade deadline acquisition of Rajon Rondo – Ellis was in the conversation as a fringe All-Star candidate. But since early February, Ellis has been struggling. He’s shooting just 38.5 percent from the field during this stretch.

But all this does is make Ellis an easy target, whether he deserves it or not. After all, as MacMahon acknowledges, it isn’t as if he’s hijacking the offense. It’s Rick Carlisle, in fact, who keeps calling Ellis’ number despite his shooting struggles.

That was the case in the Mavs’ lackadaisical outing in a loss against the Phoenix Suns Sunday, when Ellis went 4-for-22 and Carlisle kept running for plays for him. After the game, Carlisle called out his team – again, without naming anyone in particular – for lack of effort. That was compounded by the fact that Ellis refused to speak to reporters, which is something the sports media has grown increasingly sensitive about in the wake of Marshawn Lynch and OKC Thunder stars Russell Westbrook and Kevin Durant and how they’ve handled their media responsibilities as of late.

Depending on how this season plays out for the Mavs – and their recent play doesn’t bode well – they could lose both Ellis and Rondo this summer, and they’ll be once again facing the prospect of fleshing out their aging roster in a last-ditch effort to help Nowitzki chase one last championship, an endeavor that seems more and more unlikely by the day.