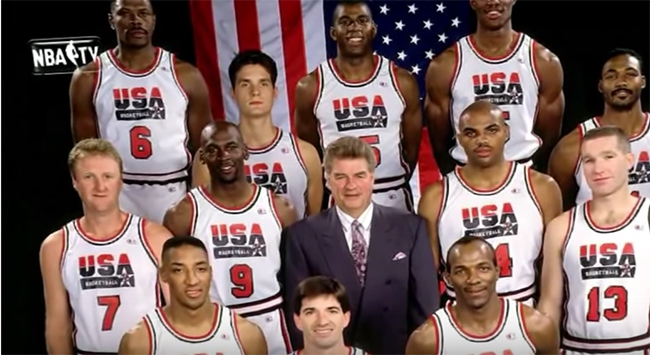 One of the most fun parts of every NBA 2K release is the ability to play as various classic teams. The upcoming NBA 2K17 will be no exception — 2K just announced a partnership with USA Basketball that will involve the 2016 U.S. Men’s team that will compete in the Rio Olympics next month and a tutorial mode with head coach Mike Krzyzewski. And, more importantly, the new game will include the ability to play as the legendary 1992 Dream Team.

2K today announced a partnership with USA Basketball that will bring the full roster of the 2016 USA Basketball Men’s National Team, including coach Mike Krzyzewski, to NBA 2K17, the next iteration of the top-rated and top-selling NBA video game simulation series*. Fans who pre-order NBA 2K17 will receive the legendary 1992 USA Basketball “Dream Team”, along with a special USA Basketball MyTEAM card and MyPLAYER jersey to fully customize their USA Basketball experience.

2K has also revealed that renowned Duke University and USA Basketball coach, Mike Krzyzewski, will be making his debut in the NBA 2K series. Krzyzewski – or “Coach K,” as he’s widely known – will appear on the sidelines coaching the 2016 USA Basketball Men’s National Team in NBA 2K17. His likeness will also be found in a revamped tutorial mode focusing on teaching fundamental basketball strategies including pick and roll execution, proper defensive positioning, ball movement, boxing out, court awareness and more.

The Dream Team, which won the gold medal in Barcelona in 1992, included Michael Jordan, Larry Bird, Scottie Pippen, Charles Barkley, Magic Johnson, David Robinson and Karl Malone, among others, and is considered one of the greatest teams of all time. Being able to play as them in a video game should be pretty great.

Hopefully, this partnership between 2K and USA Basketball is just beginning. It would be cool, for example, to be able to play as the 2008 Bejing “Redeem Team” in a future NBA 2K release. But for now, we’ll take the Dream Team.