Happy Friday, Bubble bloodhounds, and welcome back. Things heated up in the Bub this week, there were losses and triumphs as teams faced elimination and stared down into the shrinking doorway of the Western Conference’s 8-seed. If only they were trapped in the geographical representation of the place that had come up with the potion Alice had to drink to shrink herself, that would be something.

The biggest surprise of the week? Not much fishing! The other surprise? Jaylen Brown loves to be a spicy little rascal. The other surprises? Not telling, that’s what the rest of this professional report is for. 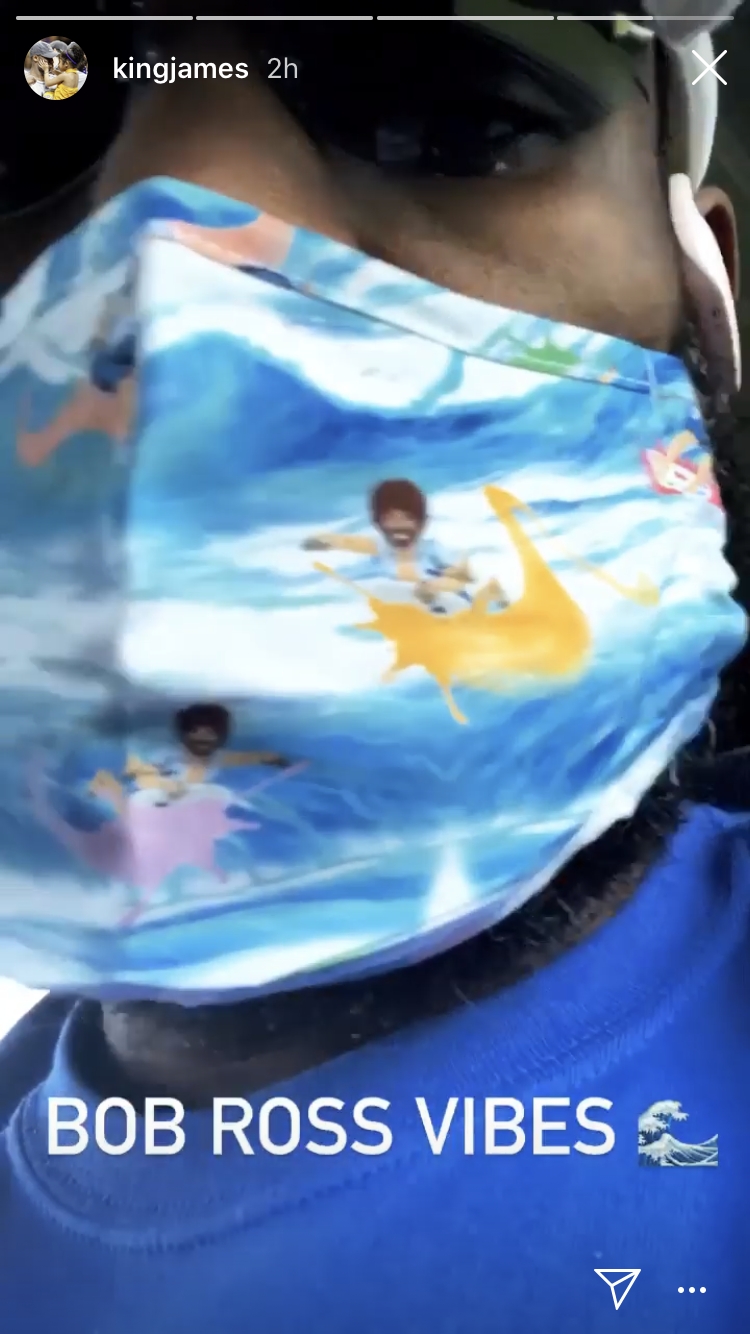 James has been on the quiet side of the sharing spectrum since arriving in Orlando. First, the guy is busy. He’s got More Than A Vote ramping up its work with the U.S. election draws closer, work with his I Promise school, and a lot of regular media. And then, well, it’s tough to be in the mood to lounge poolside with your guys if those same guys are not really delivering where it counts? Nobody wants to judge an underwater handstand contest just to discover it’s been the laws of gravity making a fool of them all along, and then multiply that by your entire roster. Anyway, James gave an up close look of his mask this week featuring none other than fellow artisan and all-timer, the painter Bob Ross. 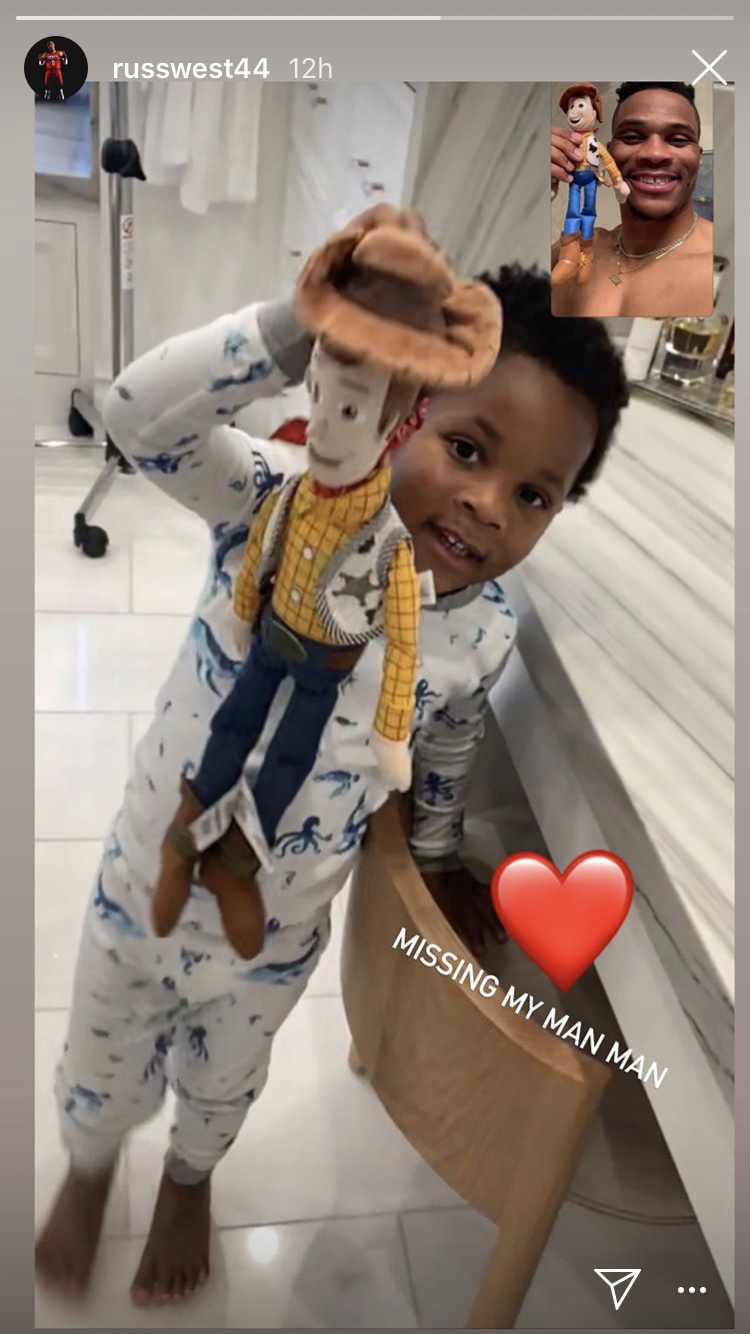 Here we go, the weekly heartbreaker, spirit lifter and shatterer, you knew it was coming. Westbrook FaceTimed his son Noah and both help up their Sheriff Woody dolls with a lot, a lot of earnest and total joy. Sorry if you keep thinking you’re going to get through this column unscathed, this is just what happens when you ride the lighting.

Rating: Now picture Westbrook packing that doll in his bag before he left home and take an additional moment of privacy. 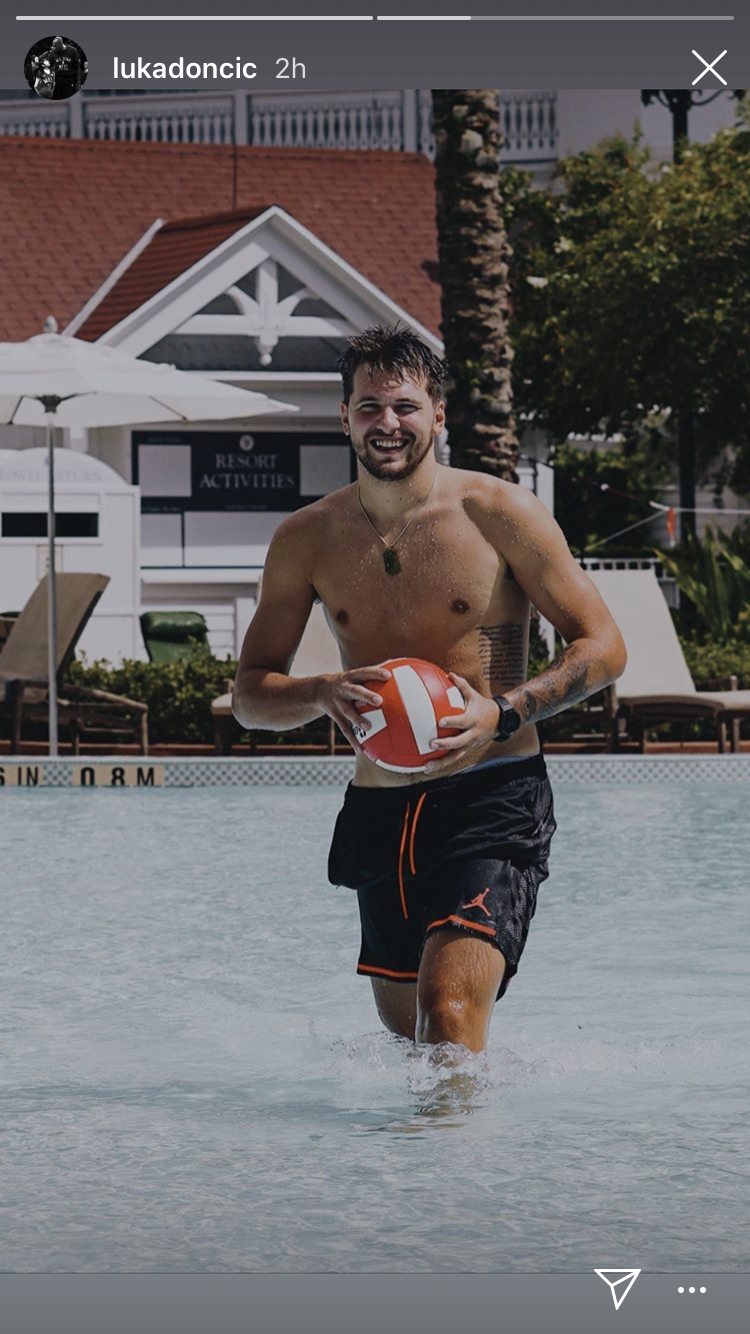 Maybe you heard Hot Girl Summer was last year, and that was true, right until Luka Doncic got in this pool and decided to bring it the hell back.

Rating: Hot Girl Summer also lives in your mind, you can have it whenever you want it.

You already knew Jaylen Brown was a passionate, outspoken, extremely intelligent dude when it came to his politics and activism, but did you know he was all of those things when it came to being a rogue? Brown is not your average, lackadaisical prankster, this guy is as committed to remaining relentless to riffs as he is to aptly shattering Raptors records on court.

First, he kept “running into” Donovan Mitchell one afternoon this week. In the hotel ballroom where the guys go to eat, and then outside at the pool, with Brown popping up over a natural fence feature to menace Mitchell from afar. Brown first just stared and smiled in the way you do when you know you’re really annoying somebody, then he started to literally flex upon the flabbergasted Mitchell who pleaded for Brown to “Get outta here, bro!”

Proficiently charged up, Brown then took to the pool for a race alongside Enes Kanter. Kanter won, but I really think it comes down to the angle this was being filmed. In any case I’m going to need to see several rematches, because this was great.

Rating: It’s comforting, to know you share a fixation for annoying your friends with someone as talented as Jaylen Brown. 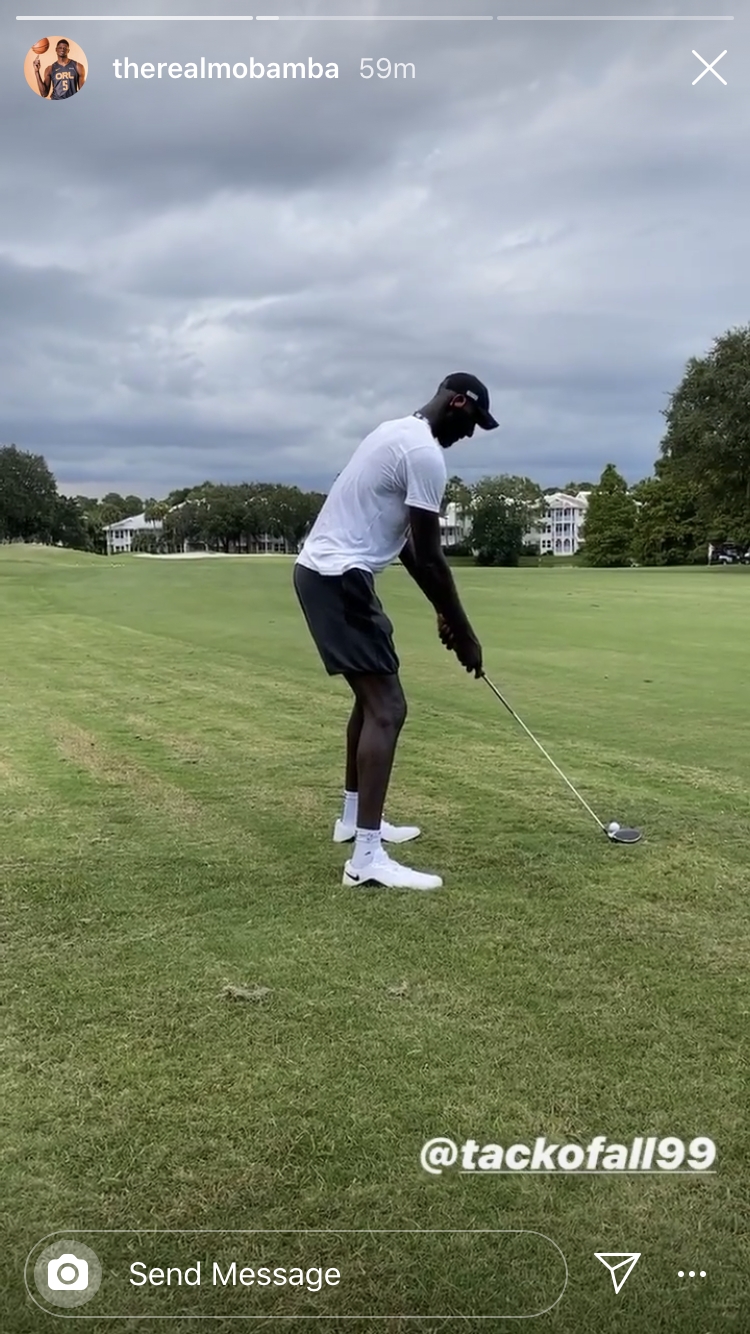 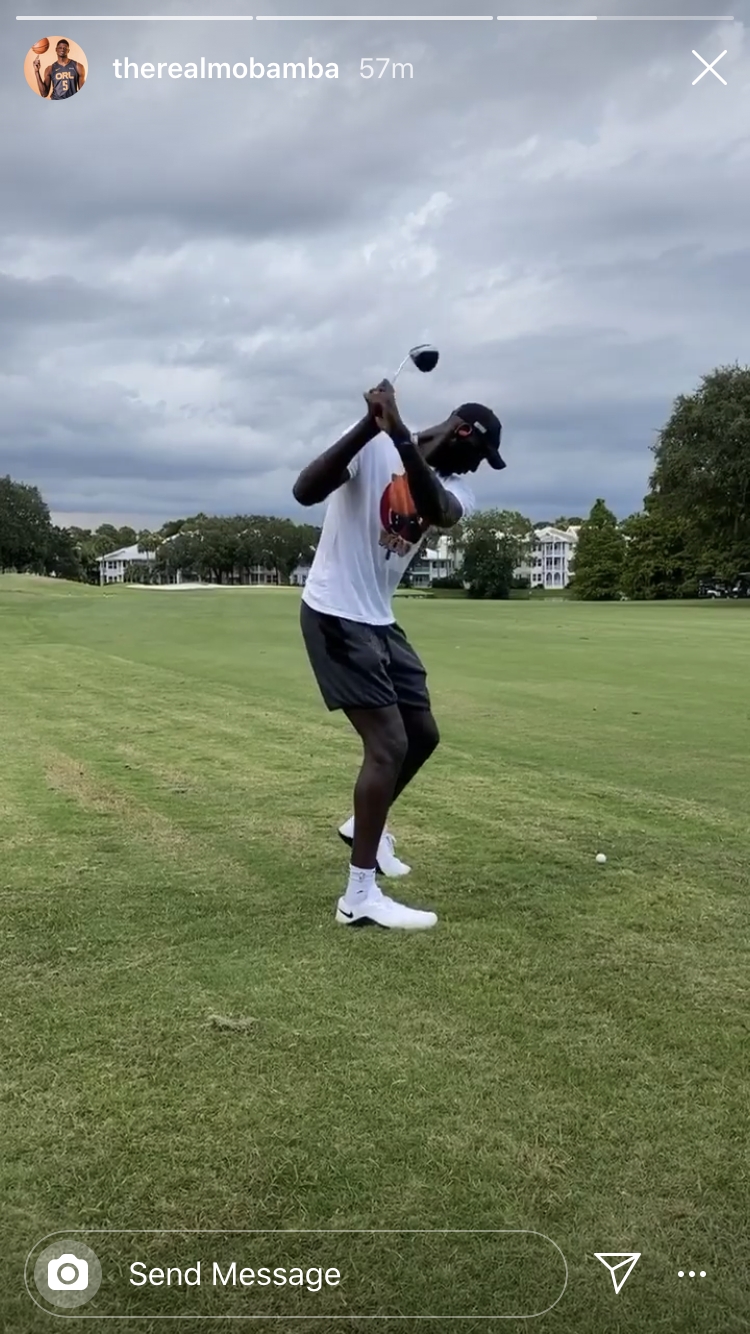 Fall hit the links with Mo Bamba this week and for a novice dinger he was looking pretty comfortable out there! Remember, I know nothing about golf but ran this by our resident expert, Robby Kalland, who said “we’ve got some things to work with, but lots to work on” and is now here to tell us where Tacko should start:

Let’s start with the positives. For a guy his height, Tacko’s posture in his golf swing is surprisingly good. Tall guys tend to get too hunched over which makes it hard to turn properly and they end up swinging with all arms — part of this is not having the right size clubs, which it appears the Disney Bubble came prepared for with some longer options for the NBA players. Fall, instead, has pretty nice posture and a good, full hip turn (key to getting power out of the swing). Now, we need to work a bit on the footwork as he looks like he might be sliding around a bit and we could use a little more stable of a base. The position at the top of the swing is actually pretty nice. He’s got the club at parallel, but that left arm is too bent and that’s going to make it tough to stay on plane. If we can get Tacko to be a little quieter with his foot movement and keep that left arm straightened out so when he pulls down he’s staying on plane, we will have ourselves a serious talent on our hands.

Rating: The consensus among our colleagues at Dime is that the NBA brought tall clubs into the Bub for guys who didn’t bring, or don’t have, their own. Open to further expert insight here. 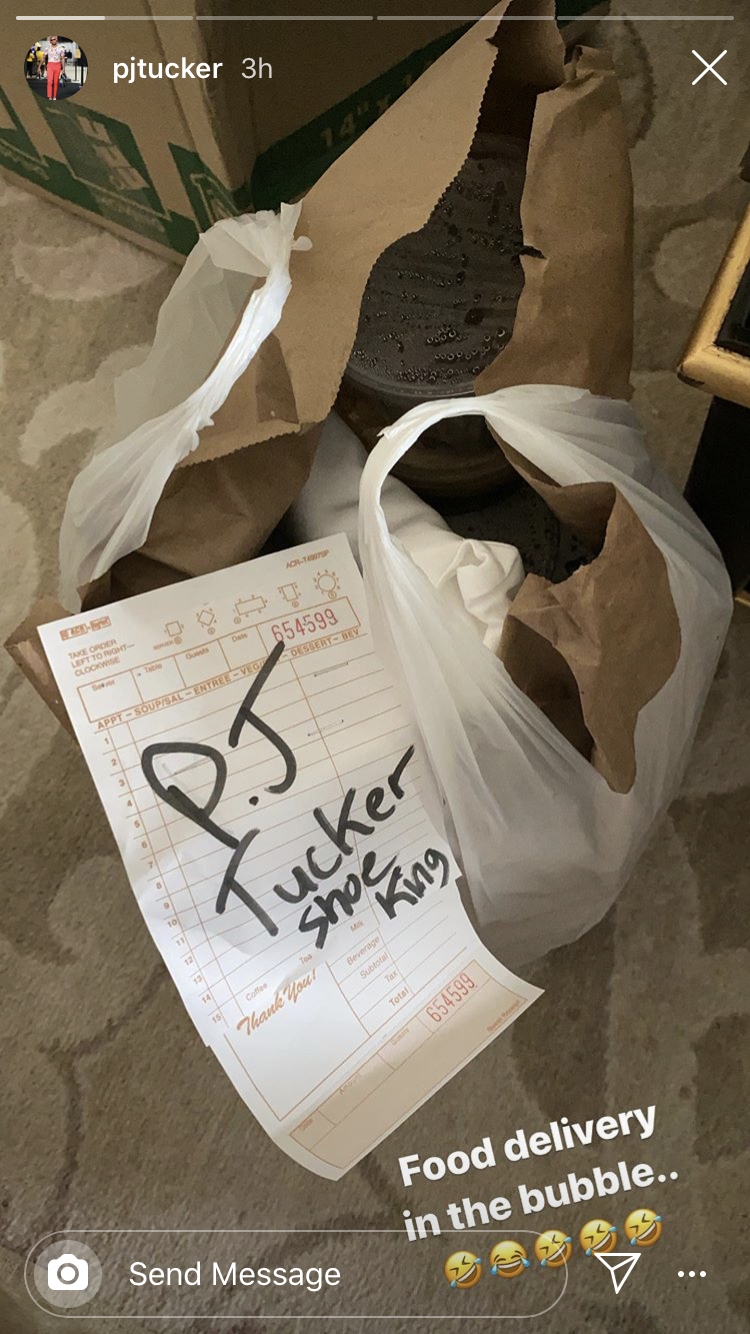 Tucker continues to live a life of exceptional taste, great notoriety and utmost courtesy, an example to us all.

Rating: You know he tipped whomever delivered this well. 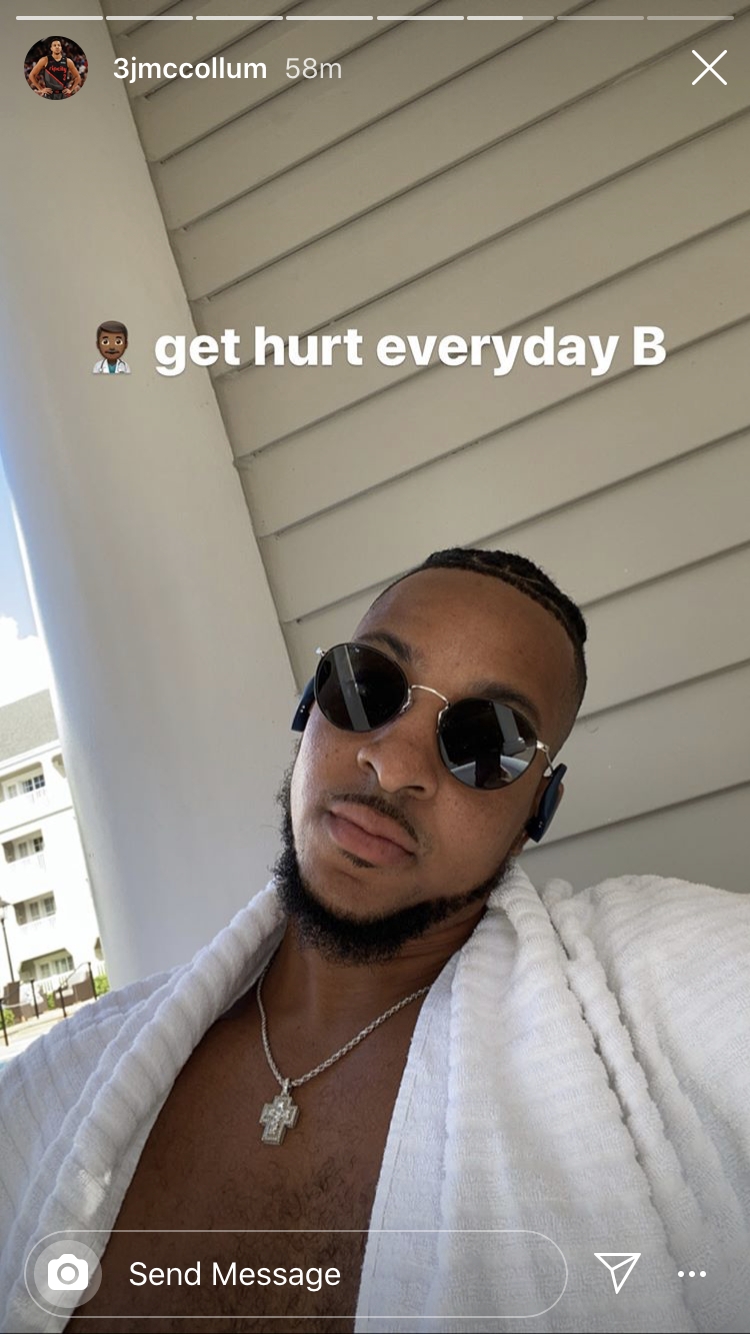 Look, McCollum posted this before we knew he was literally playing basketball with a broken back. Which is, obviously, incredibly tough but out of control! So when I first saw this I was like, geeze, CJ, I hope not. But now it seems like he was just literally telling the truth?

Rating: I would say this was taken from inside an ice bath if he wasn’t in a robe. But even then! 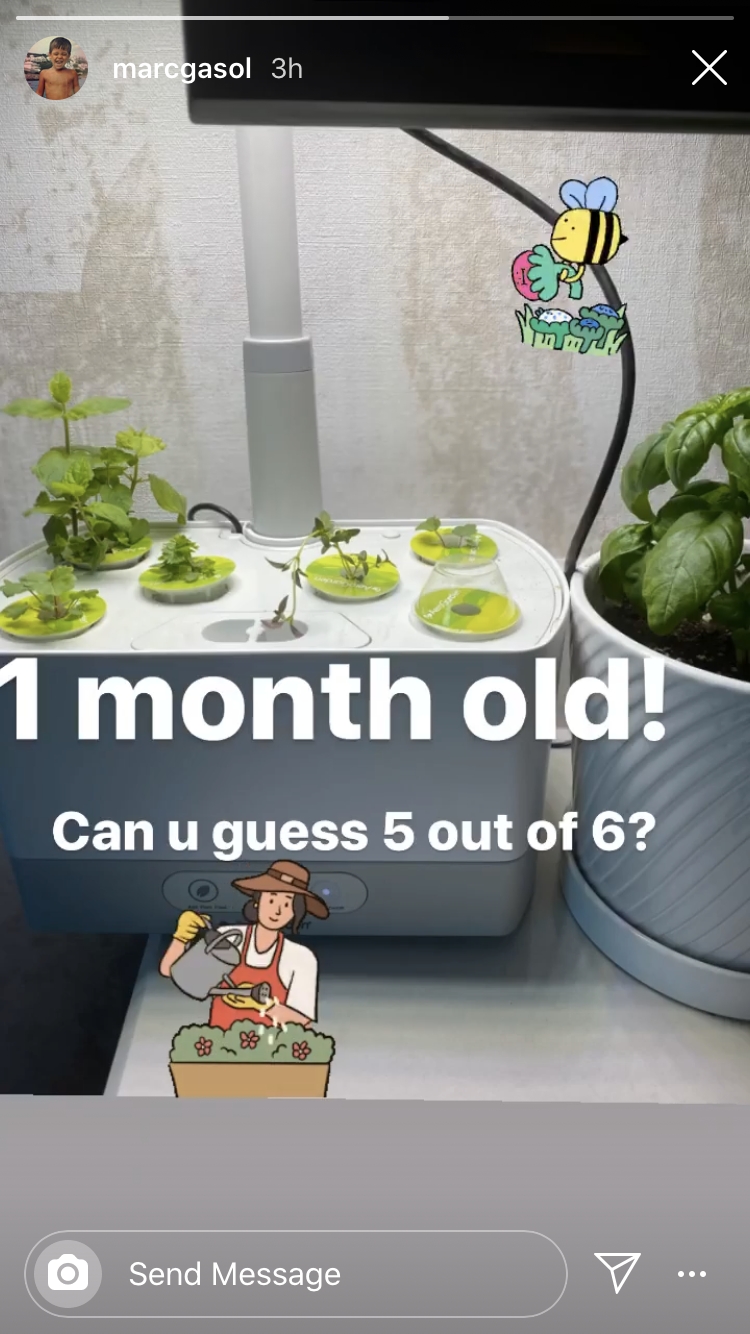 Gasol has set up his own bubble within a Bubble, a little bio dome of miniature cuttings and seedlings. The big plant to the right is basil, but I’ve simply no clue what these tiny, precious little buds are he’s tending to so tenderly. Is one a geranium?

Rating: The Raptors have CULTURE and HORTICULTURE and IT’S A PROBLEM! 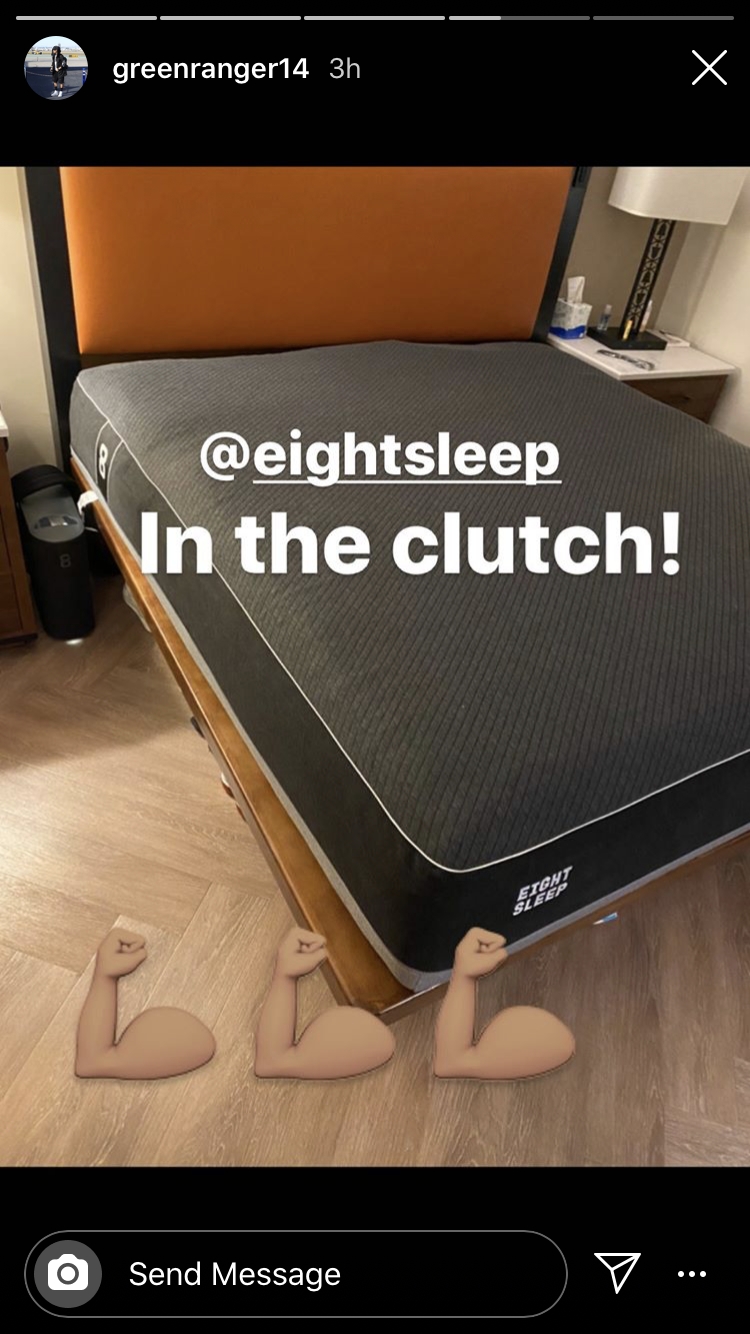 Even if this is an endorsement, go get it Danny! You’re gonna be cooped up in that room for a while yet, make it your own. Picturing this coming down the hall and wondering whether any of Green’s teammates saw it is a pretty fun exercise in reverse team building.

Rating: The Lakers have LUMBAR support but no BACKCOURT support and IT’S A PROBLEM! 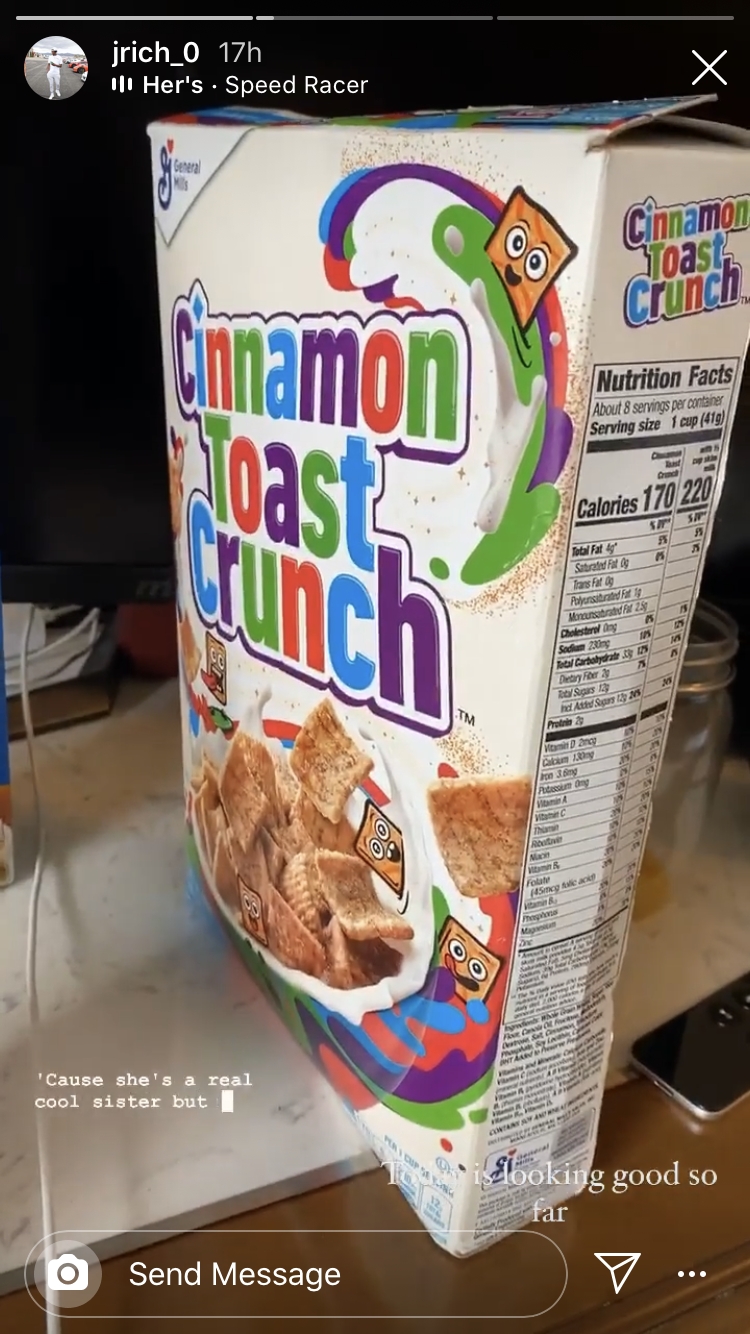 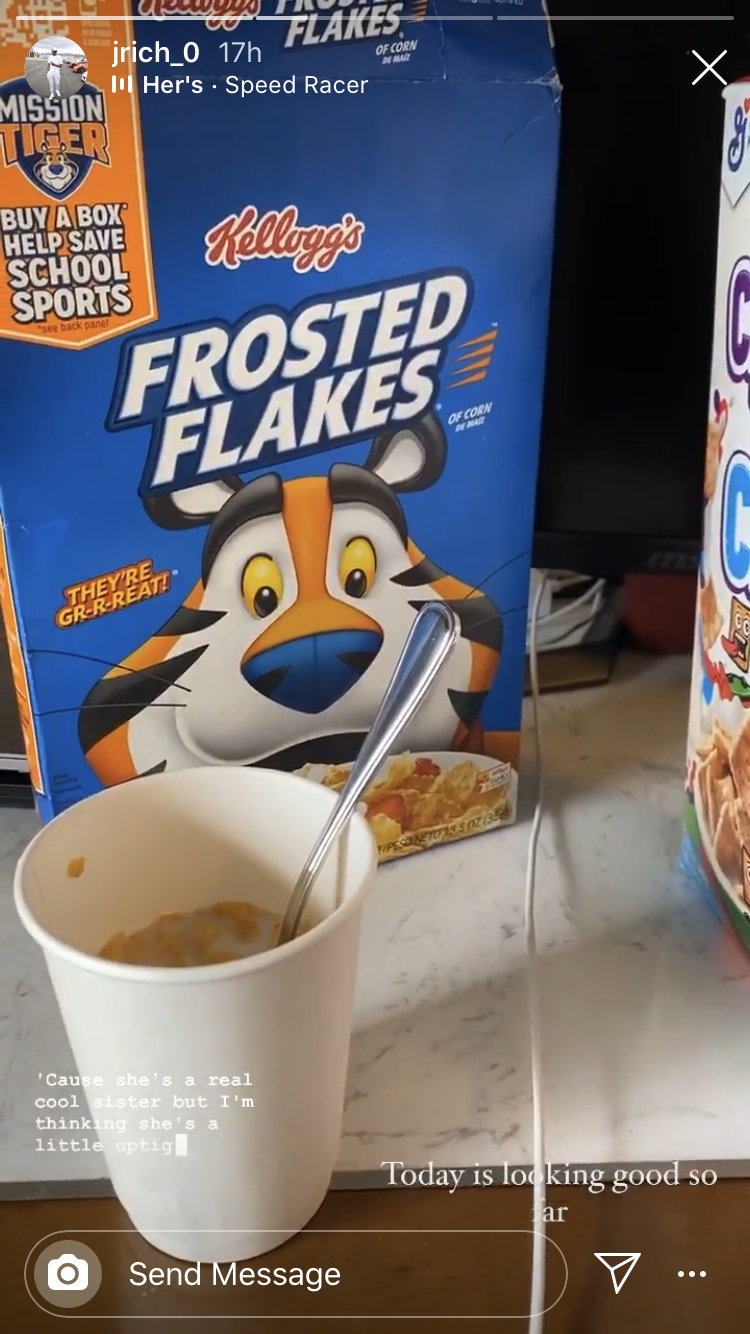 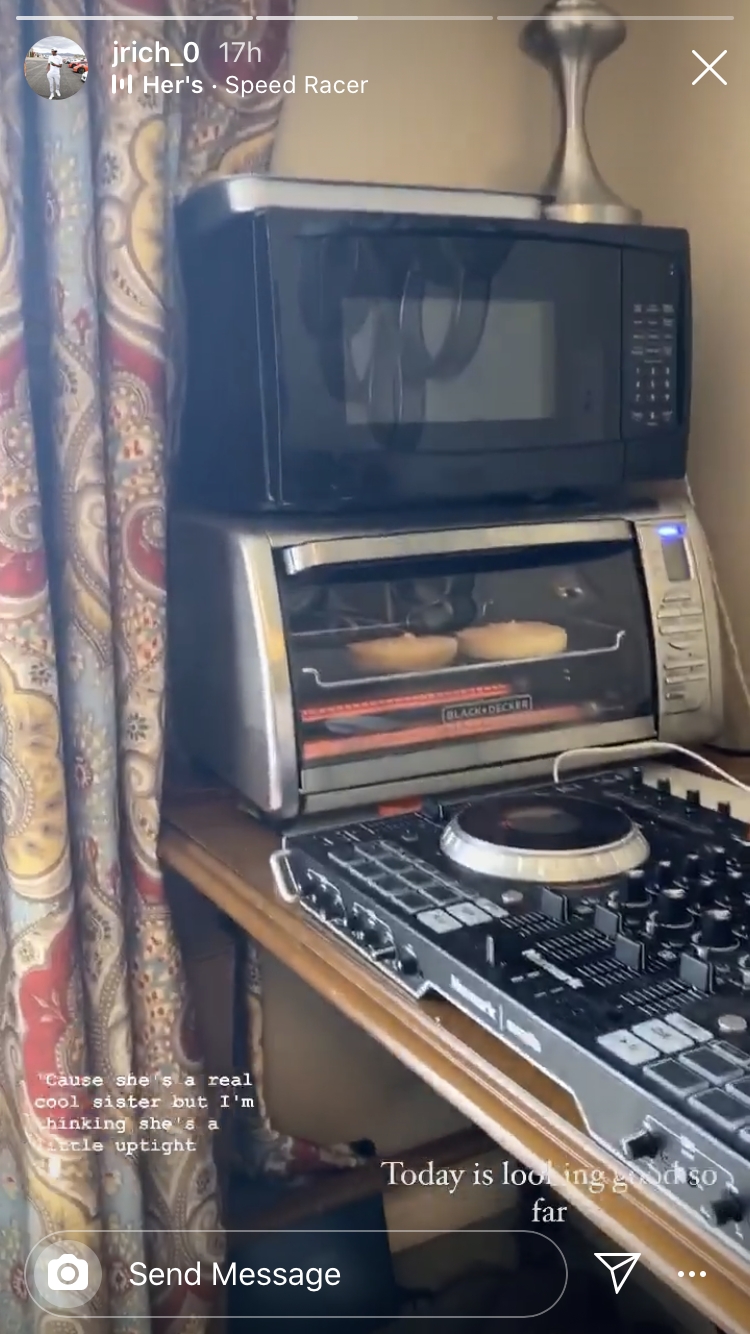 It was revealed this week that not only does Richardson mix his cereals — no big whup, right? Like, this only offends children who are purists about which benevolent sugar mascot they identify most with? — but he has set up a toaster oven and microwave on top of his mixer. Just really thinking about the outlet situation here, how many things are plugged in at any given time.

Rating: And there’s a lamp atop the microwave too? Please, get him another night table or dresser to space this whole situation out.

Quickly, for the sake of context, may I draw your attention to this photo: 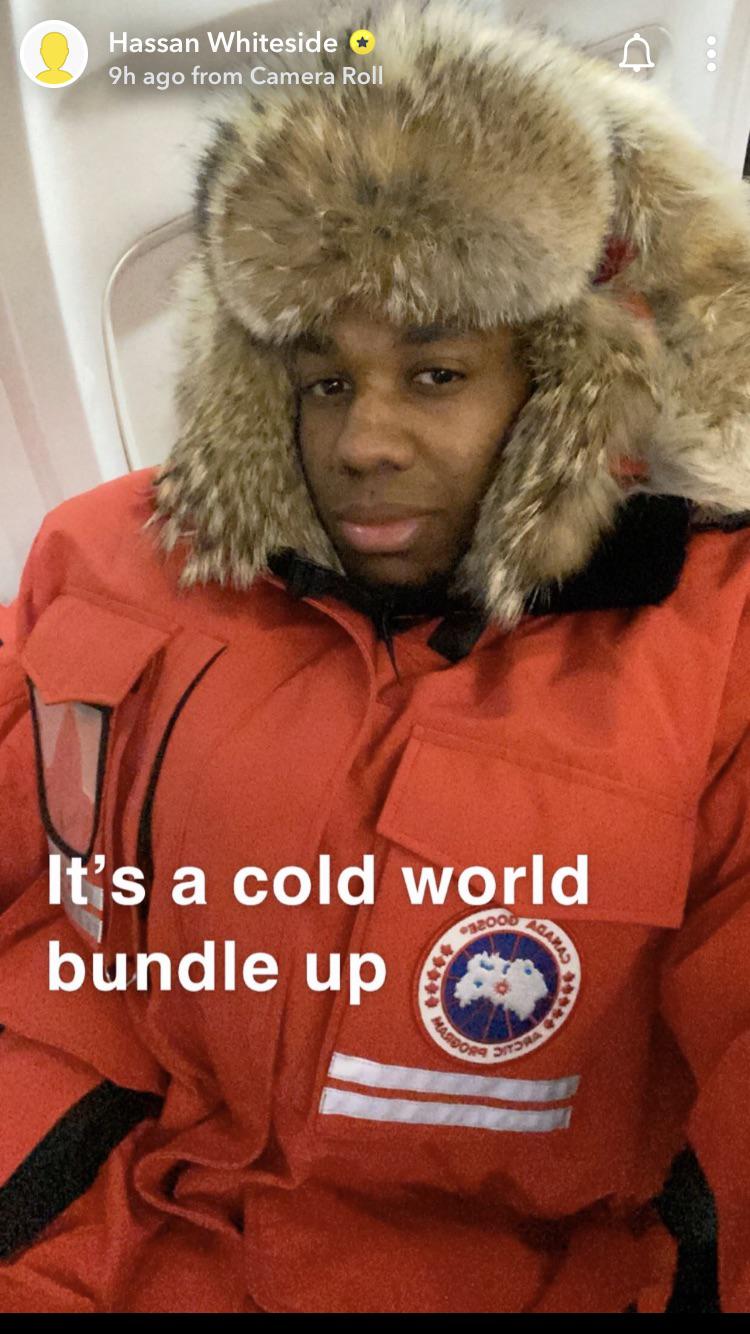 Whiteside like this phrase immensely. For him, it’s as applicable to the ups and downs of an NBA career as it is to inclement weather, but it has probably never been as applicable as it was this week seconds before he stepped into the ice bath being prepared for him.

Rating: This must be how Mozart felt seconds before ‘Eine kleine Nachtmusik’ dropped live. 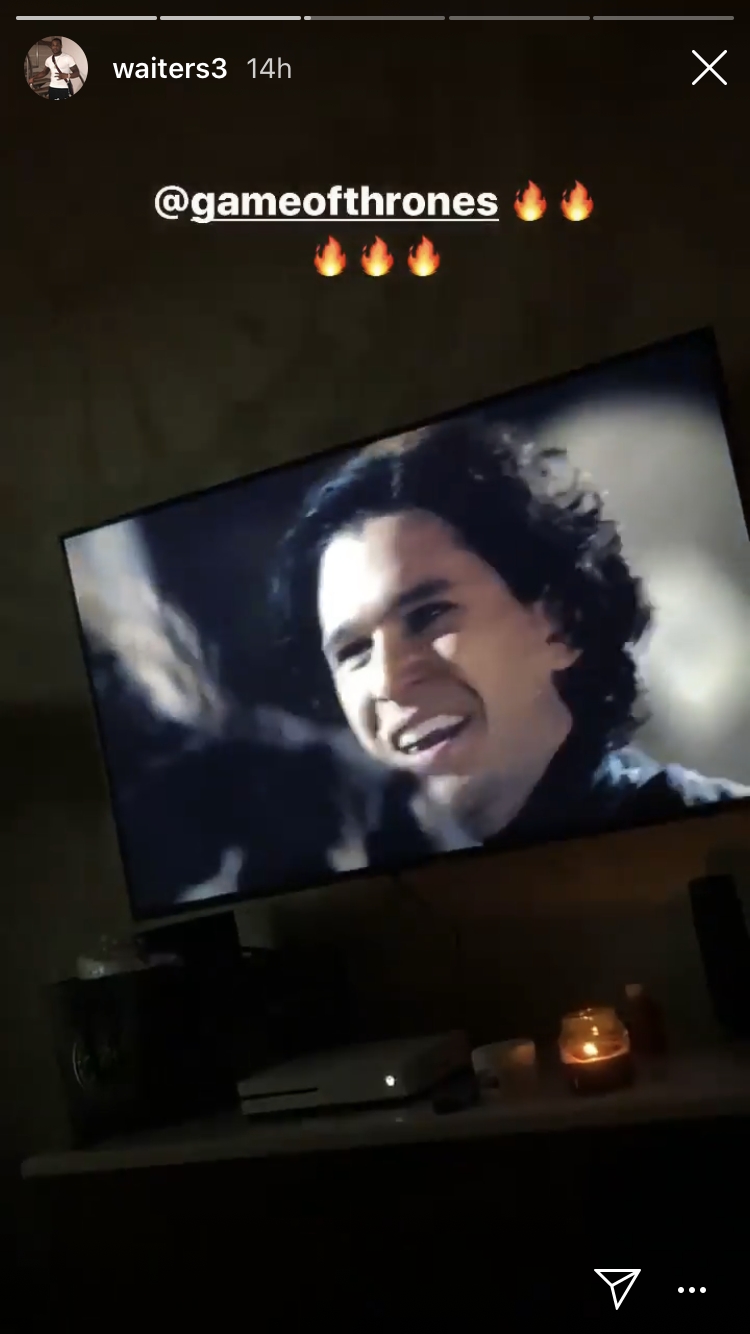 Waiters is undertaking something huge in the Bubble. No, not a new training regime: He’s started Game of Thrones. Dion my dude, I know it seems like smiles and plans and promises now but you better steel yourself for a whole fantasy world of hurt.

Rating: You know it’s really early on too because Jon is still smiling.

Aaron Gordon (through the eyes of Evan Fournier) 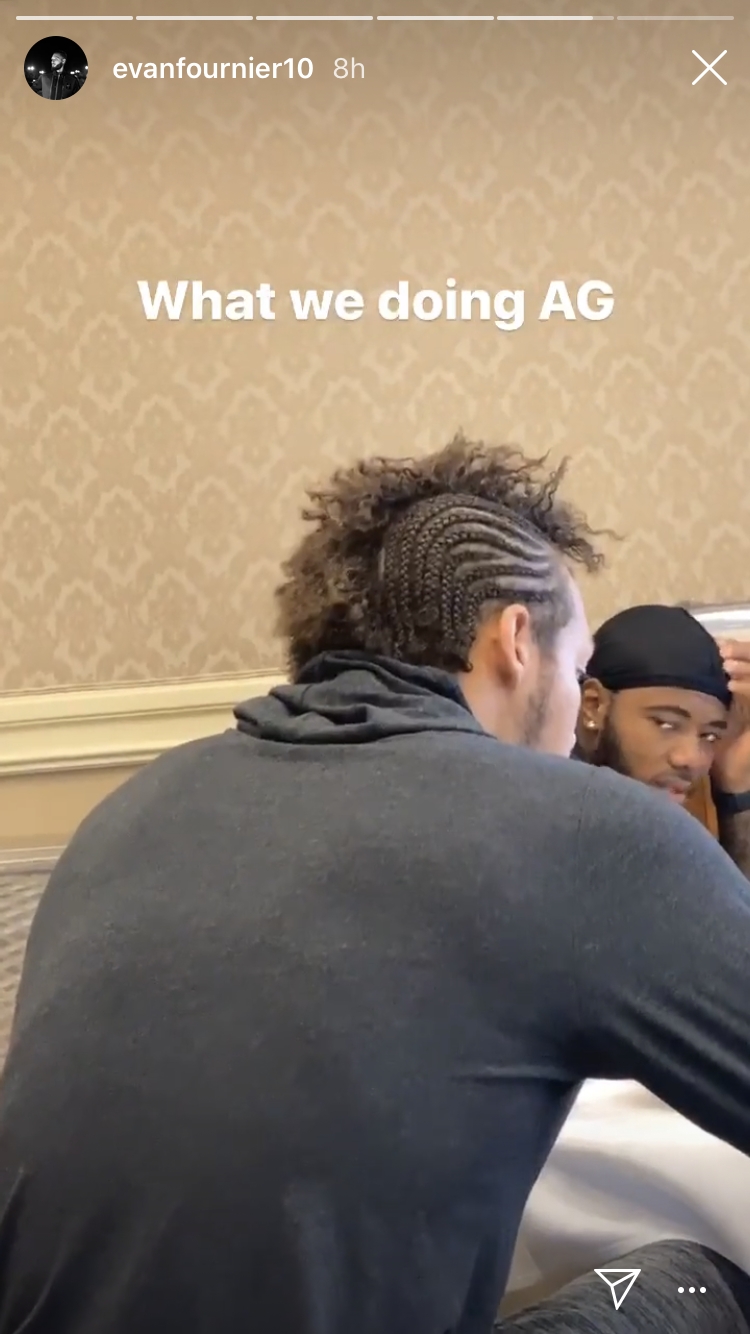 Fournier filmed the back of Aaron Gordon’s head for quite a while over breakfast this week, asking the question on anyone’s mind who saw this clip once it was posted.

Rating: And potentially the question many are asking of the Magic, in general. 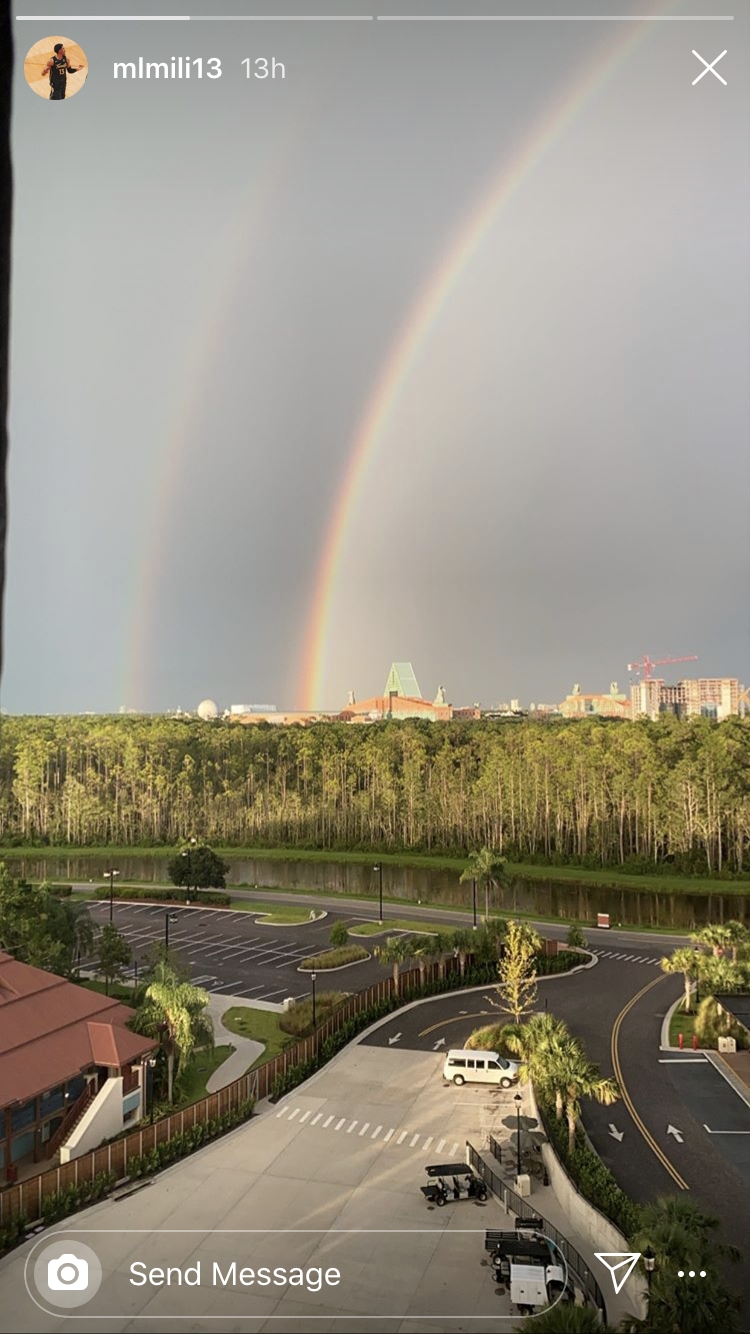 When you think of how Disney may portray the entire experience of the NBA Bubble in a few years time, do you picture it with a literal rainbow sprouting from the swamp, encasing the entire thing? 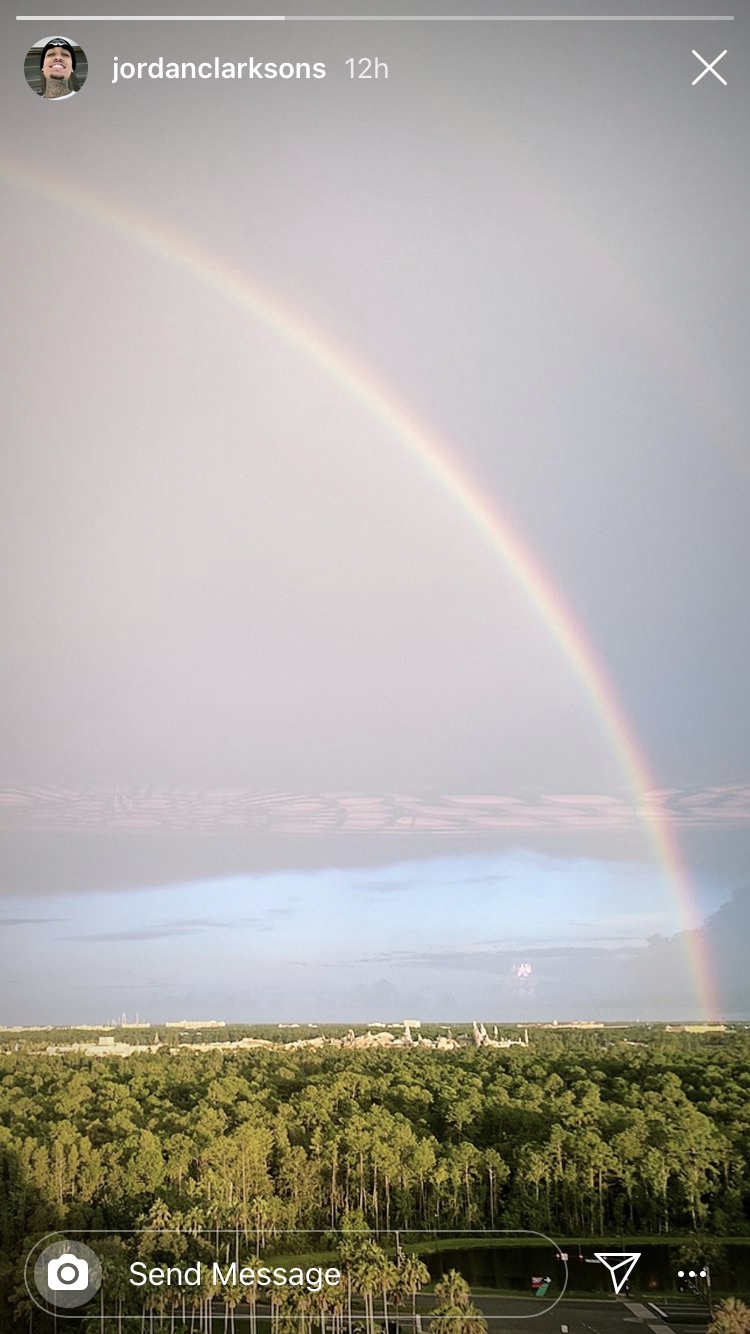 And it connects on the other end, just perfectly? There’s even some blue sky showing at the horizon, reminding us that nothing so bad can last forever?

Rating: And James Earl Jones is reading all of this out loud, inside your head? 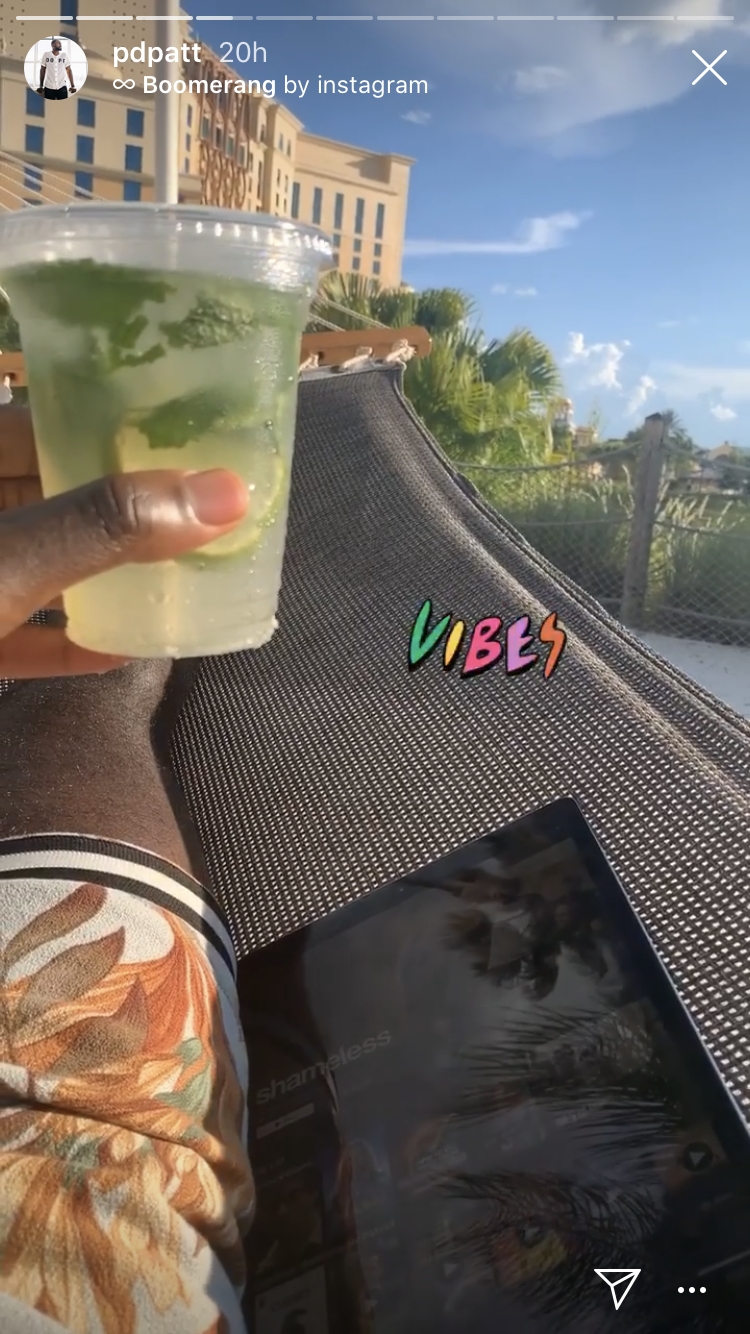 2Pats can get some guff for the amount that he spends relaxing vs. the time that he contributes on court, and man is that absolutely true. 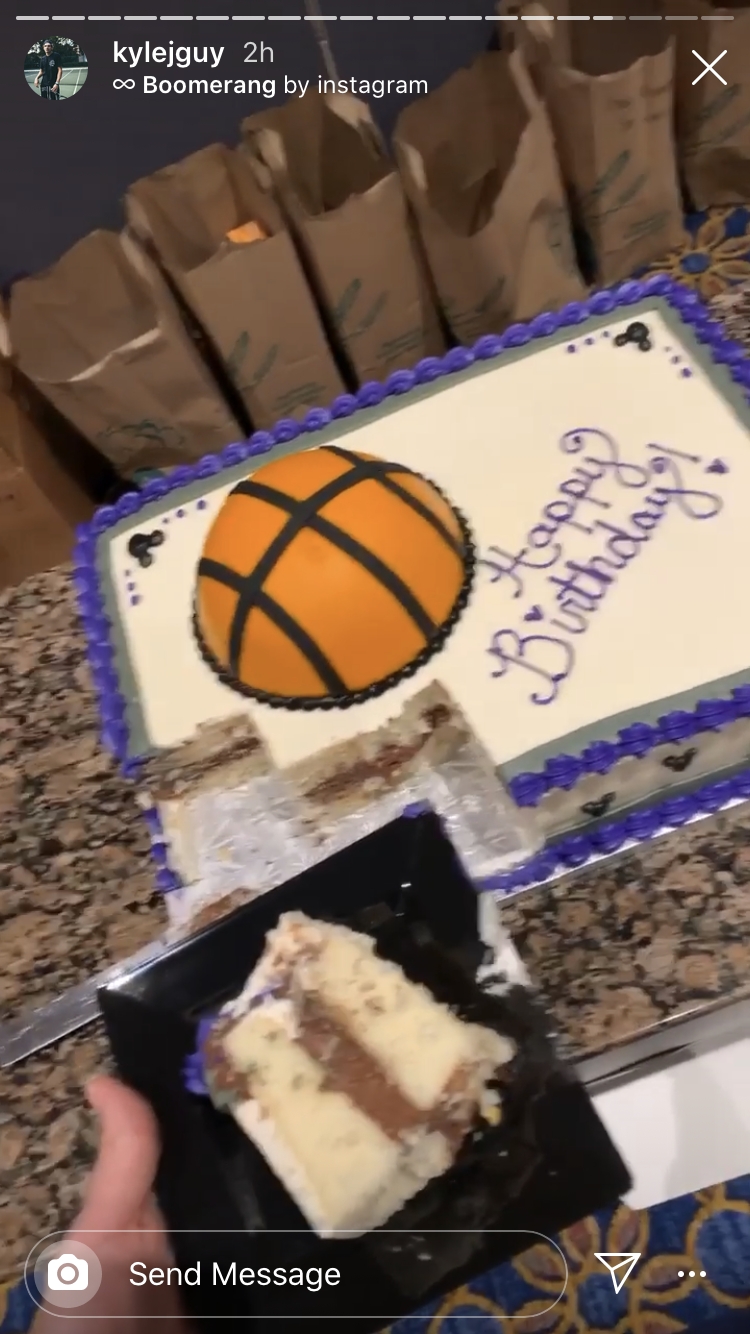 Well, the Kings are officially out but do you know what’s always in? Celebrating milestones. Kyle Guy got a really nice Bubble birthday, this cake has a basketball protruding from it, it’s in Kings colors, this is nice.

Rating: Just like a classic vanilla slab cake in the middle of a pandemic for what ails you. 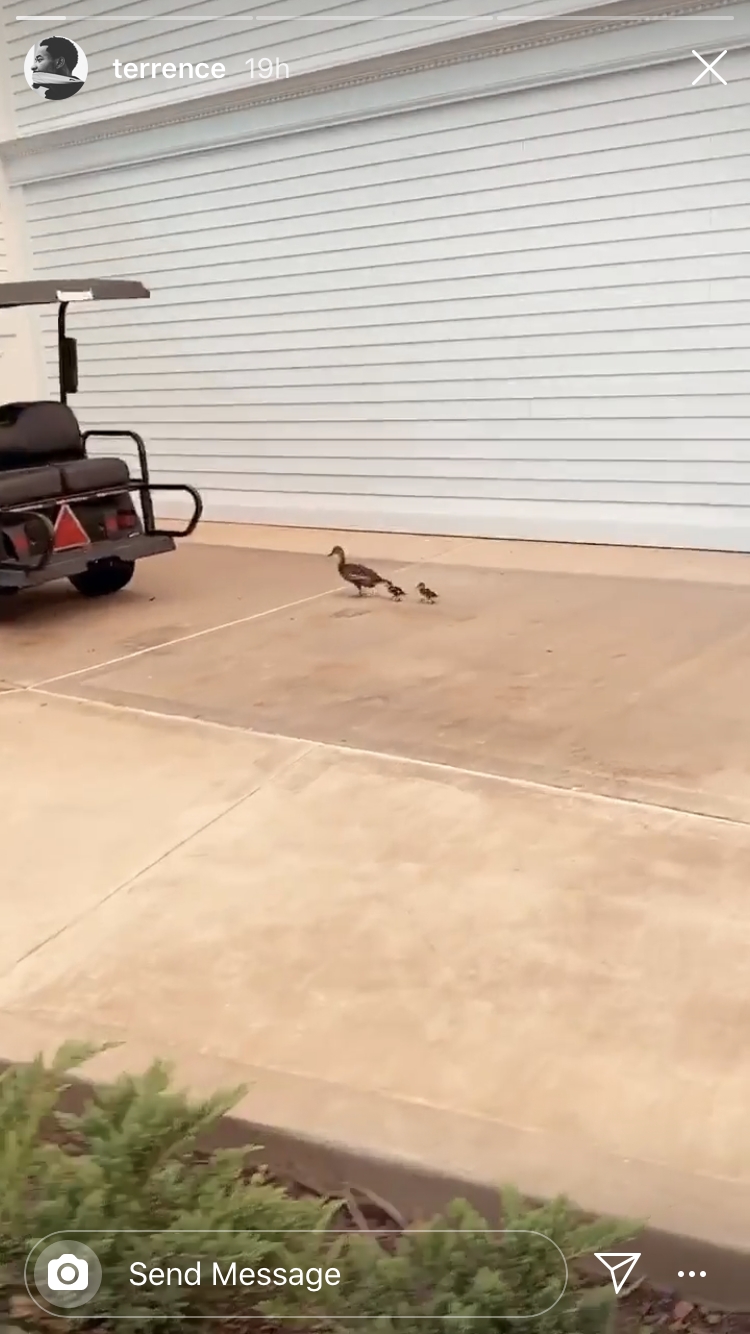 Huge news! The Grand Floridian Mallard Duck, the one that Luka Doncic has become obsessed with, that intrigued Malcolm Brogdon to no end, has become a mother. She was spotted waddling away from Terrence Ross with two little ducklings in tow. I hope these guys are looking out for her.