‘Who Knows Us Better Than Us’: On Attending The Inaugural NBA Players’ Choice Awards

Every awards show has its hits and misses. For every teleprompter miscue and corny — or questionable — joke, there are moments of greatness and even some inspiring acceptance speeches. It’s truly just part of the process. Add the National Basketball Player Union‘s first annual Players’ Choice Awards to the long list of ceremonies that made you smile, clap and raise your brow in a way that would make Anthony Davis jealous.

The show was important because NBA players have long desired their own voice in determining regular-season accolades.

That sentiment was the overwhelming theme from every player in attendance and was even echoed by those no longer effected by such decisions. Rashard Lewis, Keyon Dooling, Ray Allen and Allen Iverson all expressed the importance of the show’s origin either on the red carpet or during the show itself.

“I think these awards allow us to flex our muscles,” Dooling said. “We have some of the most recognizable faces on the planet right now. This is part of taking your space back and creating your own branding and controlling the messaging.”

The event had its share of NBA star power with Paul, Stephen Curry and James Harden representing the marquee MVP names in attendance. With BET’s help in producing the show, talent from outside the NBA was well represented. Various entertainers, actors and personalities including Lil Wayne, 2 Chainz, Jessie Williams, Mo’ne Davis, Kid Ink and the show’s host, Jay Pharoah, all made their presence felt for this inaugural event.

While BET’s help was needed to produce the well-rounded event, the perfect example of the yin and yang of the crowd’s response to the affair came in the musical performances and comic relief. Pharoah’s Drake/Jesus “Energy” rendition delighted the crowd but his brief Bill Cosby reference was misplaced and awkward. All I could do was sheepishly look at my phone when I saw him enter the stage rocking a loud sweater with pudding in tow.

I expected Lil Wayne’s performance to bring life into the sometimes “too cool” crowd, but he performed the sparse, “Glory,” from his Free Weezy album. The song, while lyrical, doesn’t have the buzz or energy needed for an awards show crowd. The performances by 2 Chainz (on his Segway), Monica, Kid Ink, Jason Derulo, and Fifth Harmony were all met with varying degrees of enthusiasm, but none electrified the crowd. 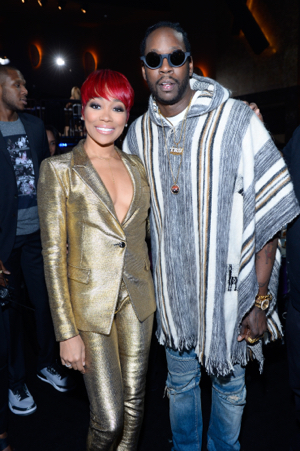 Nevertheless, all of the aforementioned productions were just filler for the actual awards. Those presentations gave players the voice they yearned for after secret ballot votes were tallied.

For example, the winner of the Best Defender award was DeAndre Jordan. He finished third in the NBA’s voting, as voted on by the NBA media, even though his coach strongly disagreed. But with his peers voting, DJ took home the award. A witty Mavericks or Mark Cuban joke might be inserted here, but the show did more than enough to beat that joke into submission. It’s worth mentioning, the 2015 NBA Defensive Player of the Year, Kawhi Leonard, wasn’t even in contention for the award.

Harden came away with arguably the upset of the night by taking the MVP over Curry. I credit the player’s perceived thinking in the voting: Harden did the most with the least, with apologies to Russell Westbrook. Don’t feel bad for Curry, though. He still received plenty of recognition with the “Clutch Performer” and “Hardest to Guard” accolades.

Of all the awards presented, there were three that meant more than the player awards previously mentioned.

Paul was honored with the “Oscar Robertson Visionary” award for his leadership as the players’ union president since 2013. It was special because he didn’t have any idea the recognition was coming. The veteran point guard takes his position as union president very seriously, and expertly balances his on-the-court dominance with his off-the-court leadership.

Ray Allen received the first of only two standing ovations on the evening when he accepted the “Man of the Year” award. President Obama endorsed Allen’s meaning to the community with a video message to the assembled crowd, but it was Allen’s own words that were particularly moving. From his gratefulness in helping his son Walker fight diabetes, to his appreciation for his station in life, his message to current players about their ability to influence youth showed why he’ll always be a class act.

Iverson received the 2015 “Game Changer” award for his influence on the league both on and off the floor. His acceptance speech provided one of the most genuine moments of the night when he said, “This award is special because it comes from y’all.” He alluded to wanting to come back and relive his glory in another life with elements of Kevin Durant, Stephen Curry, Chris Paul and a few others infused into his game. As always, he was sincere, and The Answer continues to be a favorite for many in the Association.

Those three awards seemed to shine while others made me shrug. Comedian Hannibal Buress made light of the award he presented which technically went to a building, as Oracle Arena won for Best Home Court Advantage.

The NBPA vows to have the event annually, and it would be wise to keep the timing the same. Occurring at the end of summer league is a natural fit which also seems to indicate that Las Vegas might be a permanent home for the festivities. It was solid year one for the Players’ Awards like making the extra pass to the open shooter in the corner solid. With a little seasoning and continued focus on substance over filler, the Players’ Awards as a show should have a healthy life.