Hello, Isolators! After a brief hiatus, we are back, and it is possible that you, like some NBA players here and those who will soon travel to Orlando to live in a not entirely all the way baked social experiment where at least the rules around ping-pong are explicit, are no longer self-isolating. It depends on the country you’re in, how much that government is hellbent on moving forward, the state or province, the city, honestly even the time of day. Is it imperfect? Very. Risky? That too!

What does Self-Isolation Watch look like when we are in the middle of a collage of new and shifting rules that looks like they were made by a third grader’s art class? Well, it looks like some players still at home doing the same things they have been since the end of March, some out in the streets protesting in the largest civil rights movement since the civil rights movement, and others gearing up to spend the next four months on the shores of a swamp in the strangest Self-ISO yet. It’s a weird time, dude, and I am here to wade through it with you. 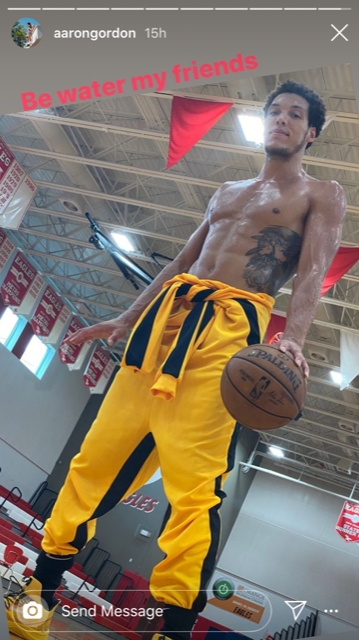 A wonderful sentiment to start with is the one Aaron Gordon shared this week from the bottom of his pool. Well, to be fair, he first set the outlook rolling as he posed mid-practice in what I am very confident is a jumpsuit. “Be water my friends,” he captioned it, ball gently cradled as if levitating. At first this elicited a very even “K” from me and, as if sensing mine and probably many more people’s reluctance to opt into an entirely new lifestyle choice right now, Gordon doubled down hard, all the way to the bottom of his pool.

There he sat, encouraging us, to do the same. “That’s why they call it the deep end,” he said. No, he didn’t say that, he was underwater.

Rating: Many questions but the first is, does water always match its shoes to its jumpsuit? 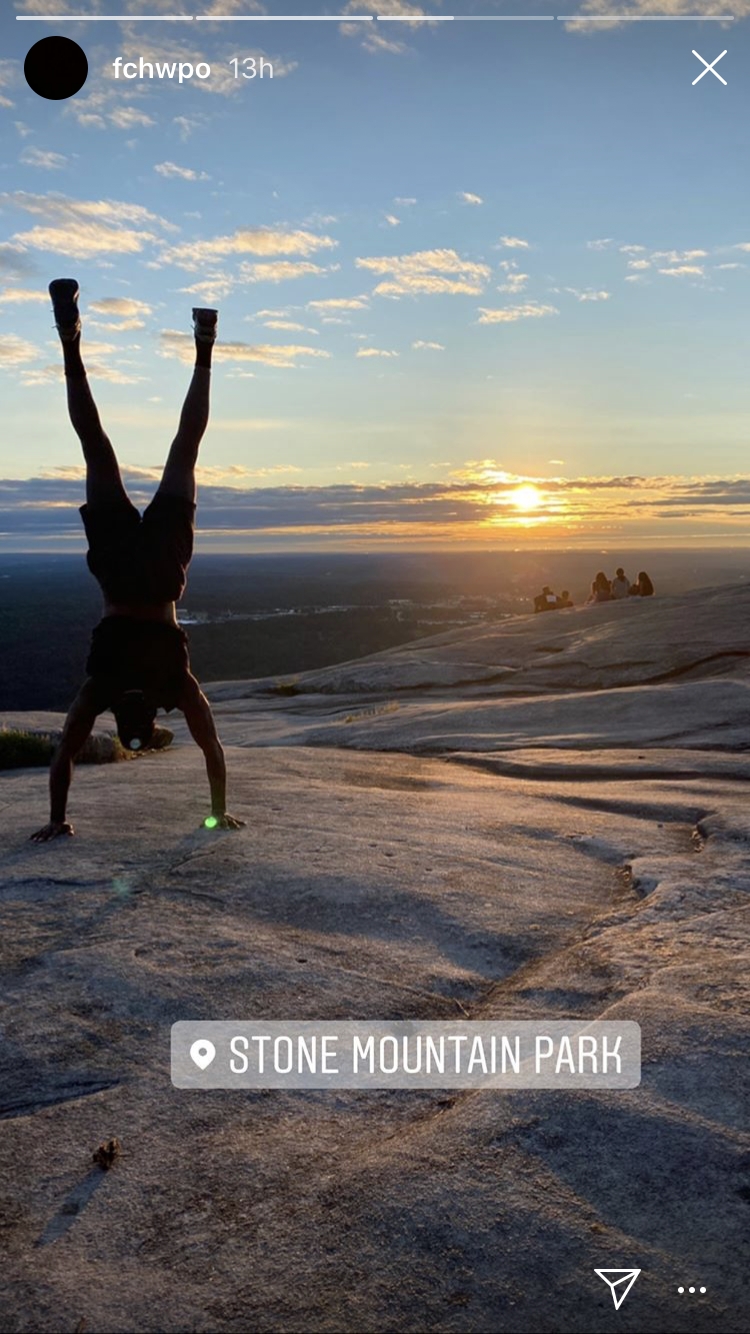 Brown climbed up Stone Mountain just outside of Atlanta to start off one of his days this week. The feeling that I have as a result of watching him handstand toward the horizon, at sunrise, is a heady mix of sheer joy and extreme concern!

Rating: A rush for us both.

This is a little bit old now but was the last thing Butler shared and also a Happy Birthday wish to one of his closest friends, Carmelo Anthony, so it plays. There is a real grace in the way Butler inserts himself into the celebratory moments of others, and a real joy in the way that he knows that he’s doing it.

Rating: Which is the most buried lede — Melo’s birthday, Butler’s football equipment, all that wine? Please, never solve this puzzle. 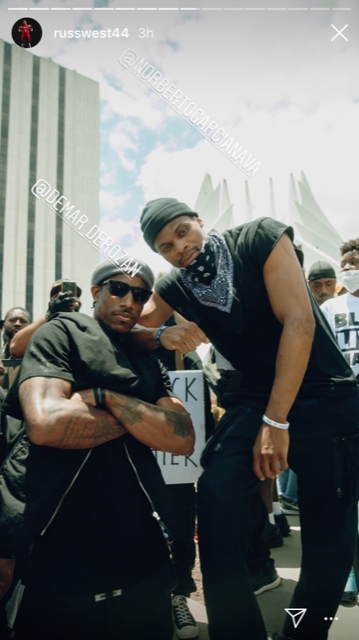 Brodie and Deebo joined the Black Lives Matter march in Compton and both spoke at the rally. Westbrook is from Long Beach while DeRozan is from Compton, and DeRozan, who can prefer to be private, has more and more been utilizing his powerful voice in recent seasons.

Rating: Chills and tears, together at last.

Two Sixers and one of North Philly’s finest took to the streets with thousands more in hopes of putting another crack in that big damn bell.

Rating: I swear this was not a subtle Sixers dig.

Lillard led protests in Portland and marched throughout the day. There’s live video he recorded of the march, his voice heard as a part of the crowd in call and response, and the weight that he gives every word will make it so you never do not pay Lillard the kind of attention he deserves ever again.

Rating: And if you already weren’t I don’t know what to tell you.

This is a very beautiful family enjoying themselves while simultaneously making every GM the league over sweat profusely.

Rating: Who are they very kindly ridiculing? 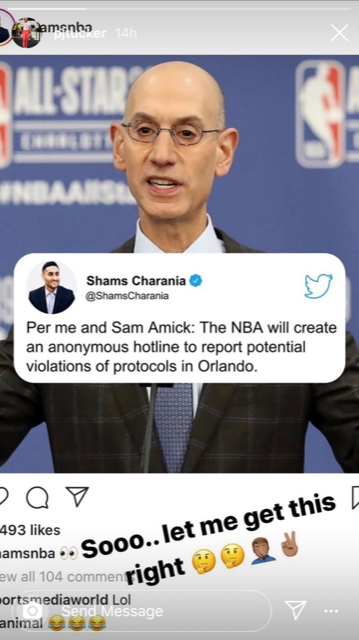 Tucker, in life as in basketball, is always the voice of reason. In basketball, his voice is staring guys down until they gently back away from James Harden, and in life, it is calling out the anonymous bubble violation hotline for the snitch line it is.

Rating: In a court of law you should have to swear on an old Nike shoebox that used to contain a pair of P.J. Tucker’s shoes. 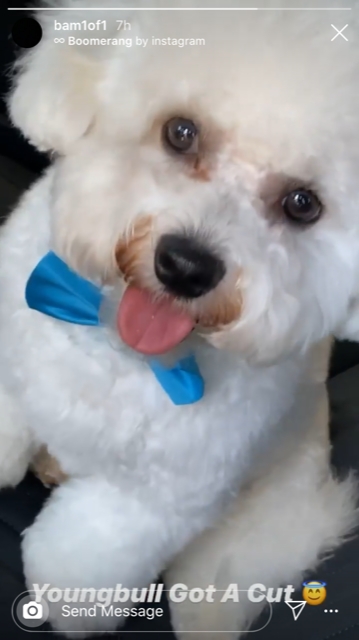 What does Bam’s dog know that we don’t? Why is this dog always going to be the one to get the job opening, the last takeout special, and the only haircut cancellation for weeks?

Rating: Is this a person who is disguised as a dog or a dog with an optometrist to the stars?

If you know self-iso then you know Hardaway has been handling it particularly well at all times. There were the few weeks where he languidly hosed down the pair of manatees that floated up to the dock in his backyard, the few weeks where he lay out on a recliner smoking a cigar and waiting for the manatees to return. With his isolation protocols just barely loosening, he took to some open cerulean waters this week to do this pose for however long he felt like.

Rating: The secret to self-isolation is to make isolation feel like it’s lucky to be alone with you. 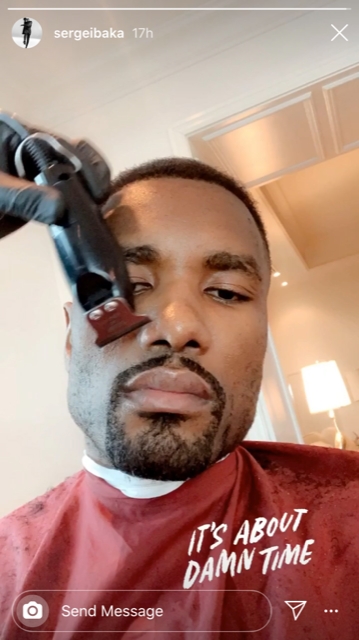 Brace yourselves, because Serge Ibaka let his cheekbones LOOSE. The big man got a big cut, his first in months, and his hair, wherever it is lucky enough to be around his head, is looking great.

Rating: I like to see his barber wearing gloves of course, and how entirely nonplussed Ibaka is in what we understand to be a moment of intense relief. 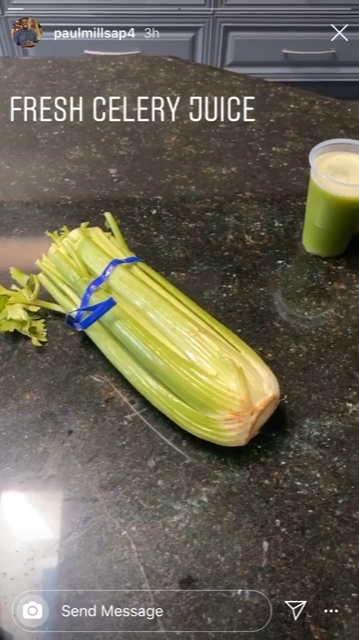 I was starting to miss Paul Millsap, a strong contender in the early days of ISO for the yet to be decided NBA Self-Isolation Watch MVP candidacy. The good news is he’s back. The even better news is he’s been putting down entire things of celery with the help of what ancient civilization might have called magic but we simply call a food processor.

Rating: A few more of these things and he absolutely won’t be stopped from winning it all.

This is powerful and honest because you can see that the camera lens and the mirror maybe need a wipe, the bathroom stuff is just out there on display even with a subtle crop, but you know what no one is around to get these photos so once again, like the 90 some odd days before this, it is up to you to take your picture.

Rating: Is he awkwardly perched on the edge of the sink? Is he standing? This photo’s proportions are the newest kind of quarantine jigsaw puzzle.

Nurk alert! The Bosnian Beast came through with a saying a little more lengthy and lost in translation than what Aaron Gordon was giving us from the deep end, but one that I have a hunch the majority of people reading this will be more willing to get behind.

He’s been asking me to do this with him so here goes nothing!! 😂🤦🏾‍♂️ #Kenzie #kj #dreamgirl

Caldwell-Pope skipped up to the edge of his pool and kind of blew the surprise that was coming by checking over his shoulder but when his kids showed up atop the waterfall over the pool and covered their eyes to do a synchronized dance with him it really made the roller coaster of a reveal worth it.

Rating: You can tell his son was really getting on him about making sure he worked his knees right.

Danny Green got engaged! On the beach! At or around sunset!

This is cute, Kuzma put on an incredibly intricate fit to try and upstage his girlfriend, Winnie Harlow, who did the same thing but also, remember, does this for a living. 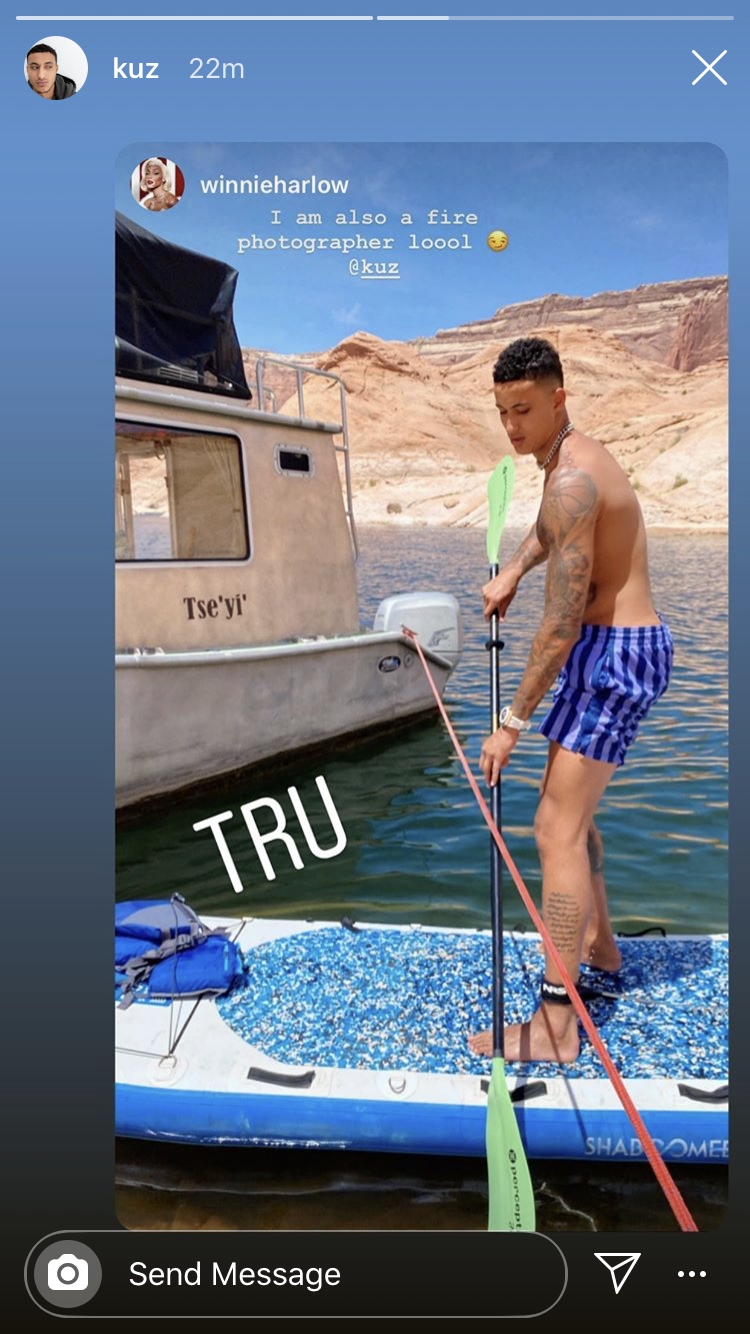 Then he went paddle boarding a little bit awkwardly, with the ankle strap firmly affixed and a tension line to grab onto, which is kind of the perfect analogy for a new relationship.

Rating: There’s a young love blossoming in the desert reference to be made here but I’m also not Sting. 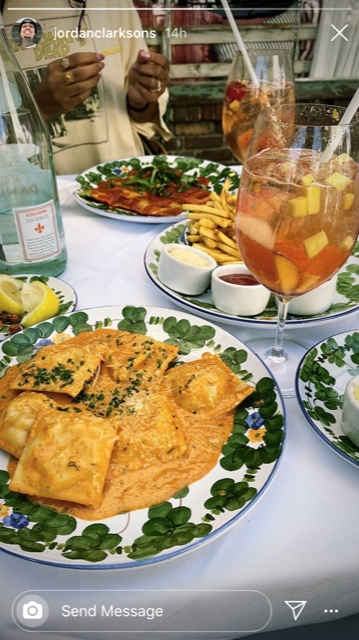 This isn’t a food blog but Clarkson just had what looks like a really nice dinner.

Rating: I miss restaurants. The little lemon wedge plate. The overpriced bottle of sparkling water. The fries for the table. The goblet drink with a straw! 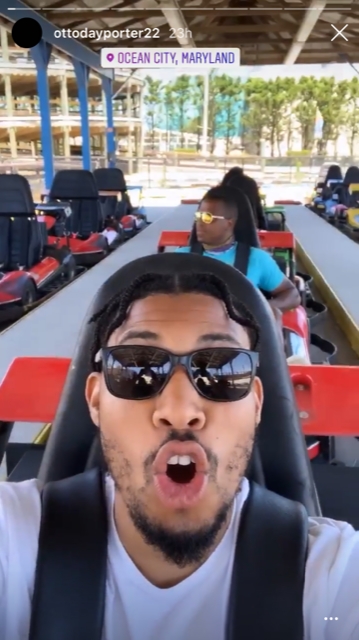 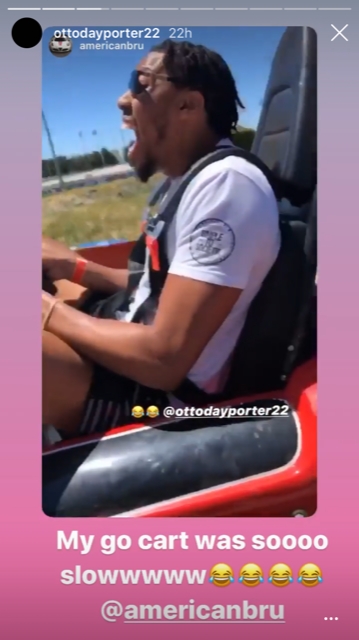 Porter burned miniature rubber this week when he hit the go kart track with some (one?) friend(s). First I was going to say this seems like a good setting to wear a mask in but then I saw they were alone, with fresh air whipping into their faces at a speed of 12 miles per hour.

Rating: He really loved these karts. 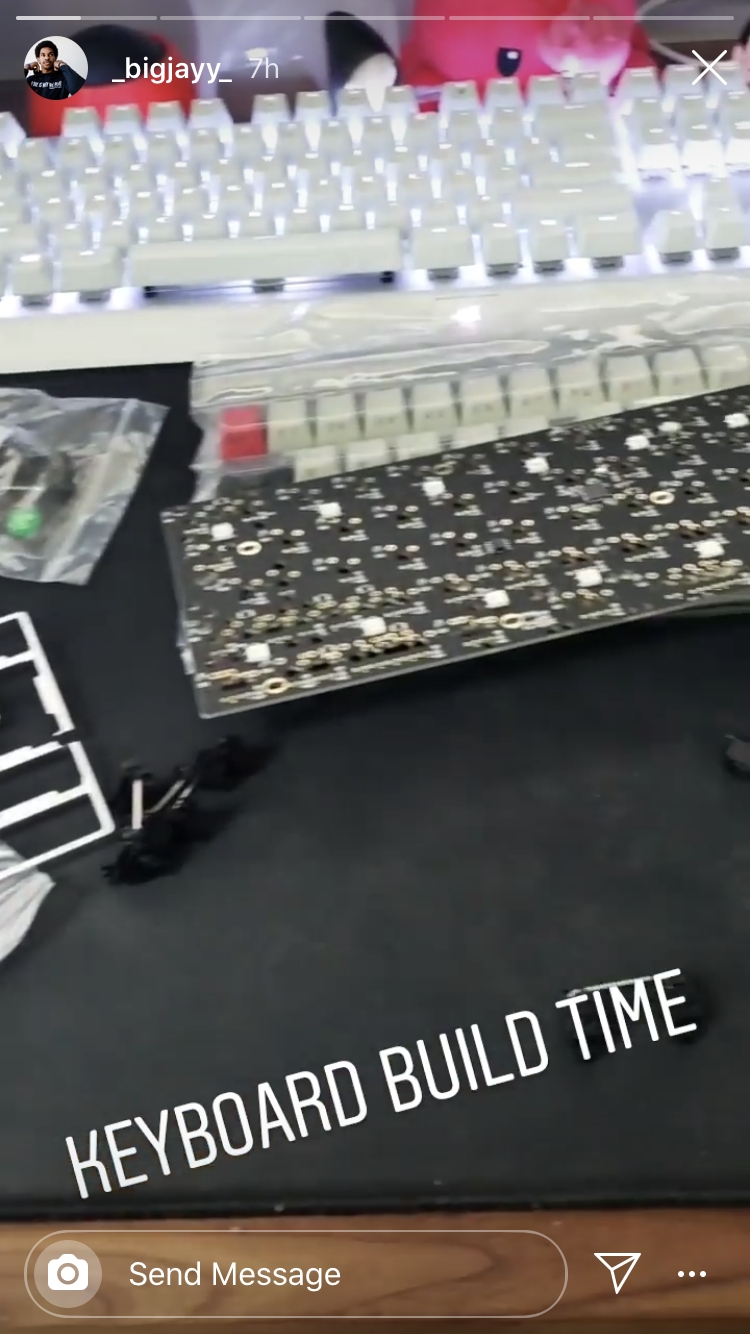 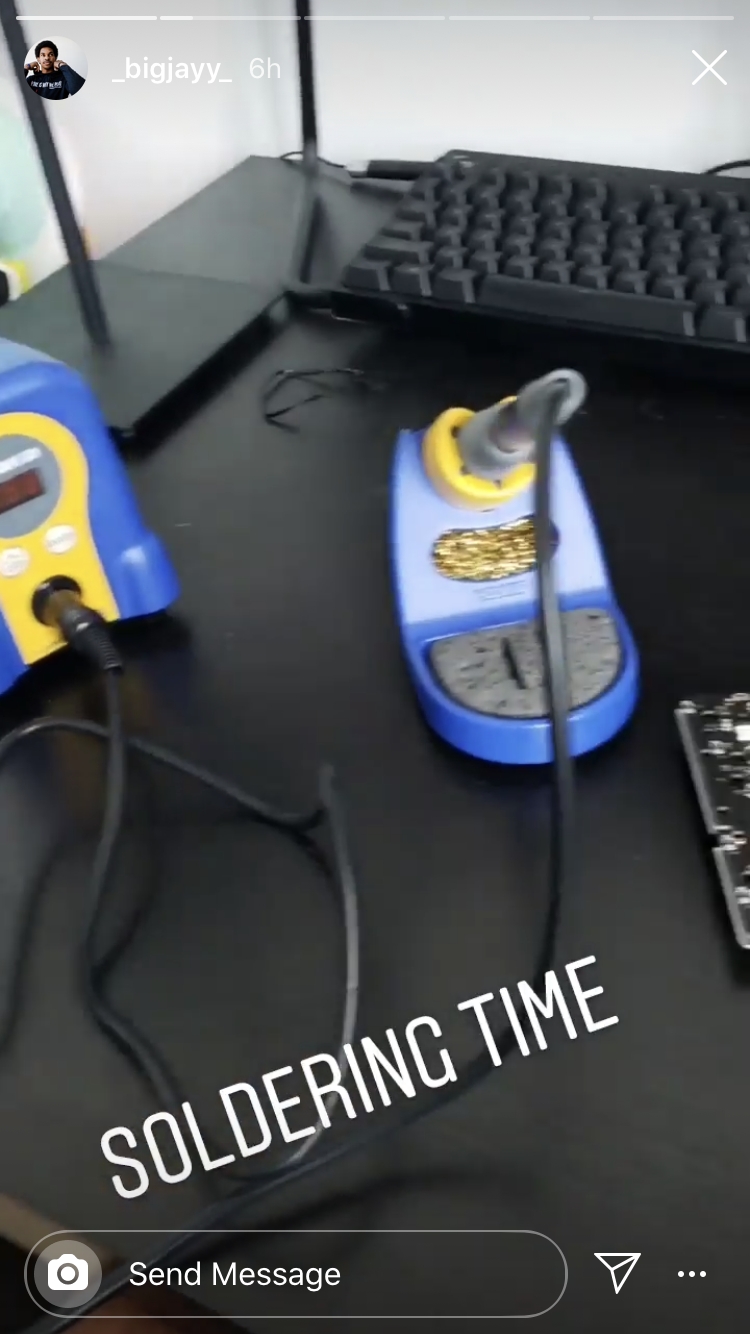 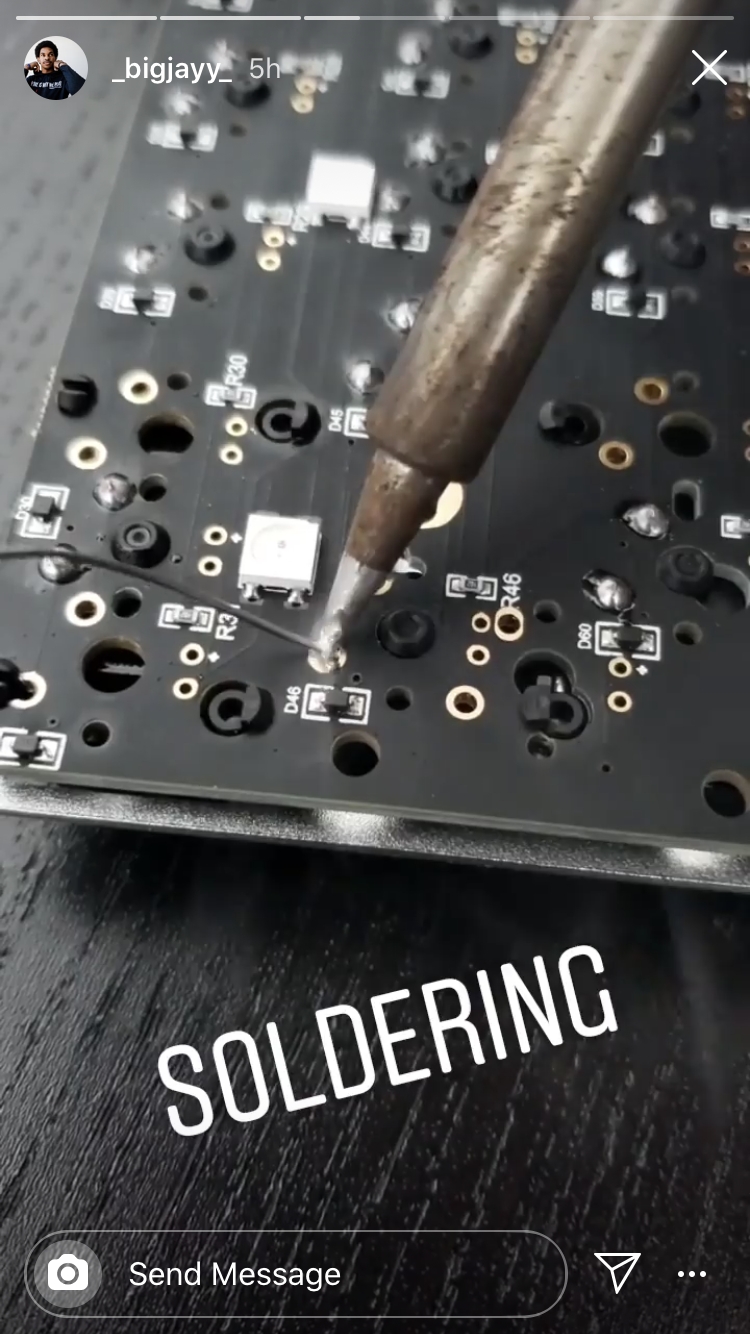 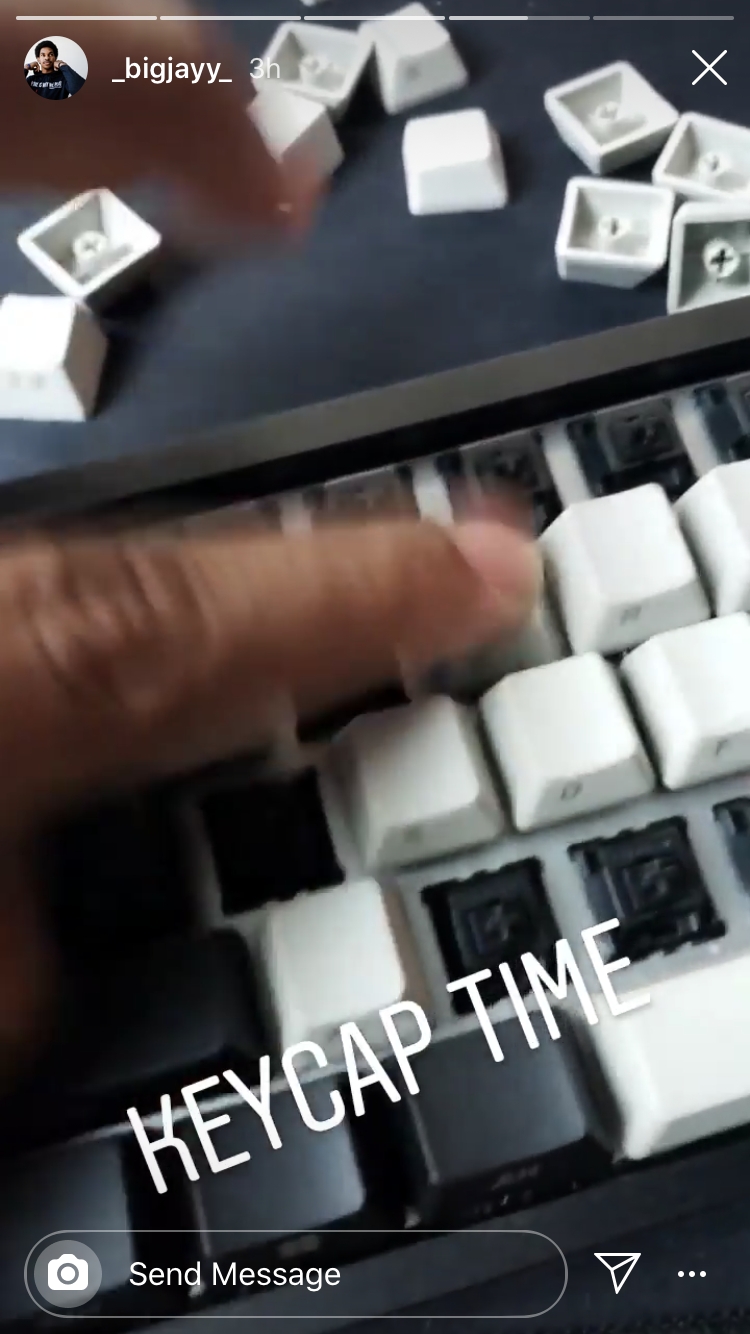 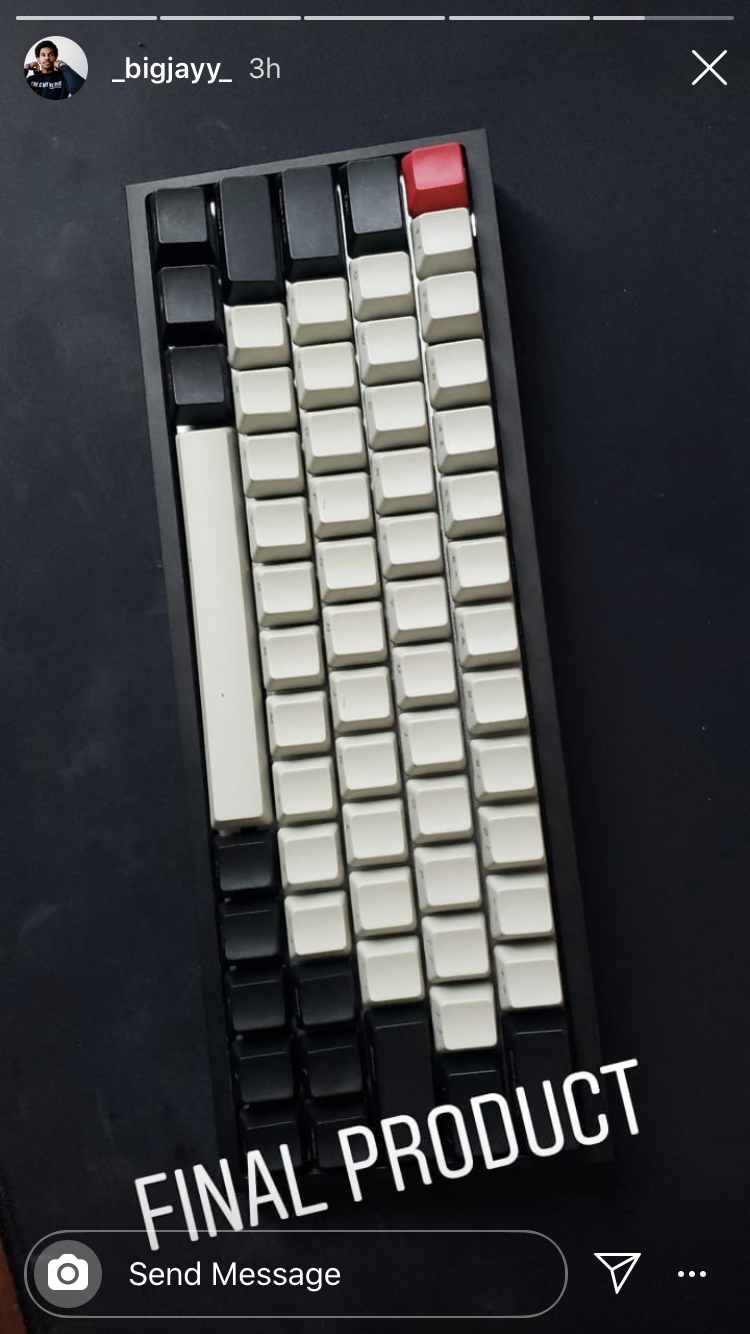 The tallest and most wonderful nerd you’ve ever seen, Jarrett Allen, built a new keyboard for himself this week. Every step had its own dedicated sequence — “KEYBOARD BUILD TIME,” “SOLDERING TIME,” “SOLDERING” (no B.S. here), “KEYCAP TIME” — and the finished product just a thing so sleek it doesn’t even have letters or numbers on it.

Rating: My heart truly cannot COMPUTE the love I have for Jarrett Allen. 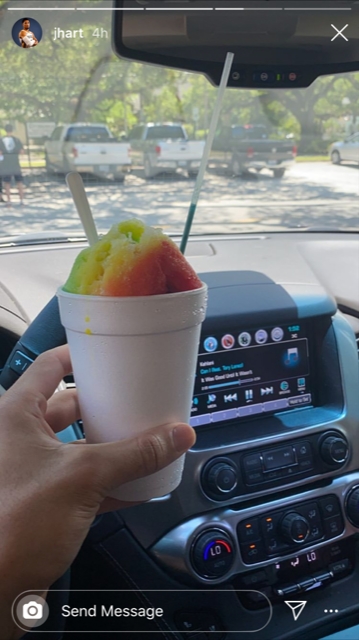 Even though he can’t get his favorite thing (beignets) right now, Josh Hart is making the most of it by enjoying a cup of Sno-Cone, so, a Sno-Cup.

Rating: And I hope he’s enjoying it from the comfort of his pickup truck at the pickup truck Sno-Cone Rally based on those other three trucks lined up in front of him. 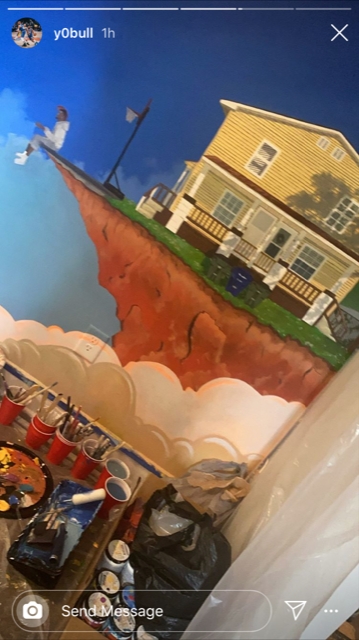 I am very ashamed to say that I either had no idea Reggie Bullock was a beautiful and talented painter or that an entire genre of fine art dedicated to painting portraits of Reggie Bullock casually dangling his legs over the abyss in a new kind of American Gothic had been invented until this moment.

Rating: Eat your heart out, the literal American Gothic. 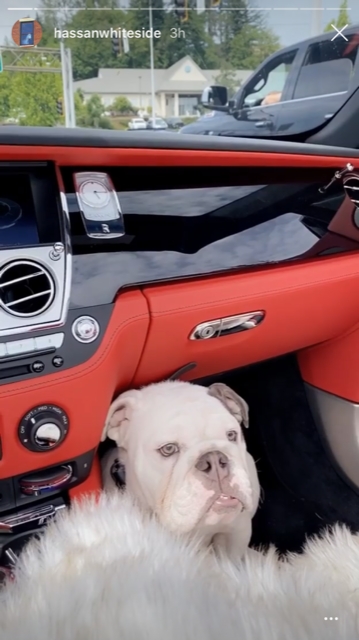 Here is another dog in a car that looks like they’ve seen your future and can’t bear to have their deeply human eyes make contact with your own.

Rating: But at least Bam’s had a little bowtie on to distract you from the news. 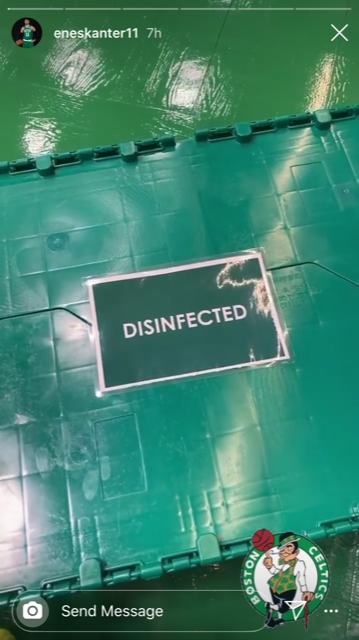 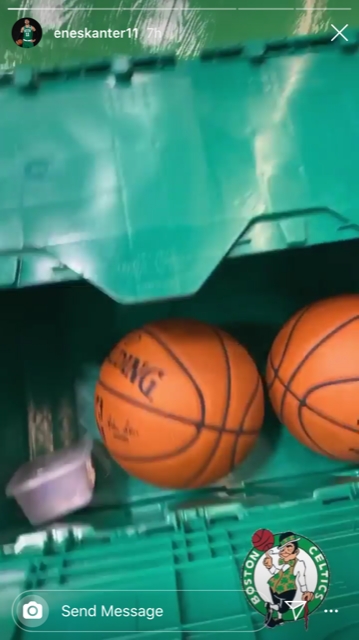 To be fair, this was about a week ago and NOT in Orlando, but, is a pretty funny and sad and accurate depiction of what it’s going to look like, times a hundred more of these reusable packing boxes full of disinfected basketballs once everyone gets to Disney World.

Would it be wrong to say this seems like the most fun Mitchell Robinson has had all season? No, because he plays for the Knicks.

Rating: He caught a fish and nonchalantly walked away from it while it was still on the end of the line. Paul George, eat your heart out. 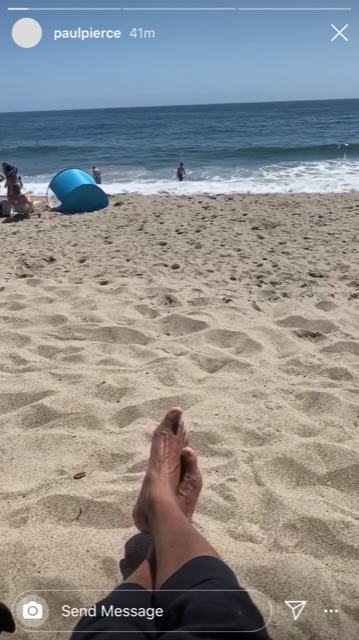 You will be relieved to know Paul Pierce has resurfaced and that it’s on a beach. He was kept away from the ocean for too long in isolation, no longer does he need to “break into” the beach itself, but is he happy? Or did he begin to live for the rush of sprinting heedless toward the waves, ignoring all cautionary signage, his mask never on properly? He wiggled his toes here, but it felt forced.