In Praise Of Richard Jefferson, Relevant Again After All These Years 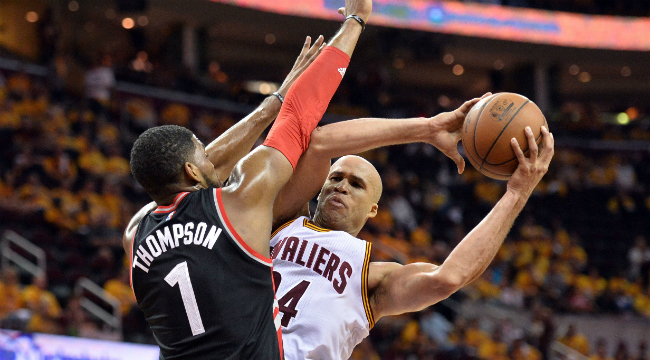 Well, too bad, he’s 35. You might have thought he was older, but I doubt you thought he was younger. Jefferson has been in the league since 2001 and whatever notoriety he gained, he did so in New Jersey, where he played until 2008. That’s when he was traded to the bucks for Yi Jianlian, which, yeah. Nets stay Nets-ing. He had a decent season there, but he wound up on the Spurs for a few years during their fallow period, when they went a whopping seven years between titles.

Since then, he’s bounced around playoff teams in increasingly reduced roles, from the Warriors to the Mavericks (with a brief interlude for starting minutes on a terrible Jazz team), and he wound up in Cleveland, where he’s had a minor renaissance in these playoffs as a dude who can actually play the three when LeBron is on the bench or at the four. Obviously, the Cavs are still much worse when Jefferson is in for LeBron, but the former has sprung free for some crafty offense, with a couple of backdoor cuts and alley-oops, with the requisite three-pointer or two. On defense, he’s not the stopper he used to be, but he doesn’t give up much for free either.

Let’s back up for a second though, to appreciate his journey. Jefferson made the NBA Finals in each of his first two seasons, initially as a backup rookie getting a surprising amount of minutes, then as a starter who was one of the primary scorers on the team. He was one of Jason Kidd’s favorite fast break and alley-oop targets, and crafted himself into a decent outside shooter as well. The next few years saw Jefferson battle injuries as the Nets core broke apart, and Jefferson’s profile around the league never solidified into what it could have been.

He did leave the Nets as one of the best players of their most successful period, and as such he’s been immortalized in YouTube tribute fashion. If you’re a connoisseur of the genre, you’ll know that this is a gem. It’s over-edited and doesn’t do enough to highlight his all-around game, but it does feature his TV appearances and is soundtracked by the goddamn Goo Goo Dolls:

He was in the dunk contest, and had some of the most vicious posterizations you’ll see, but he was more than a dunker. Had he been peaking now, perhaps we’d hold him in a little higher esteem, as his defensive versatility and ability to draw fouls at high rates would both be more heavily scrutinized in our analytical era. The Spurs knew what they were doing, and he started for them during two playoff runs, after all.

Even so, he never sniffed another shot at the title. You can tell how much he valued winning based on how often he showed up on playoff teams, even ones who had little use for him as more than a ninth or 10th man. He was one of the last additions to Cleveland’s roster before the season began, and if you saw him for extended minutes this season it was probably because LeBron had a day off or the game was in garbage time. But for whatever reason, possibly because Iman Shumpert is still stunted in all aspects of offense, he’s played some meaningful minutes in this postseason run.

As far as veterans getting one last shot at the title on another star’s coattails, Jefferson doesn’t scan as much as, say, Tracy McGrady on the Spurs in 2013. Still, he knows the significance of being here:

I could have written a different blog post that led with this: Growing up, we couldn’t afford to go to Knicks games, so we went to see the Nets a lot on these McDonald’s Family Plan tickets that were promoted in the New York area. I saw a lot of Richard Jefferson as a kid, and considered him the most fun part of those teams. My brother liked the Nets — and by extension Jefferson — a lot more, but that was not one of the many things we fought about.

It makes me smile every time I see Jefferson useful on the court again after so many years out of the limelight, but you’re not required to have that same reaction. That backstory is the reason why I am personally invested in seeing him get to shine again on the biggest stage, possibly for the last time (he’s on a one-year deal). But he deserves to be enjoyed on his own merits. You may not be rooting for LeBron, but you should be rooting for RJ, because this is his moment, too.