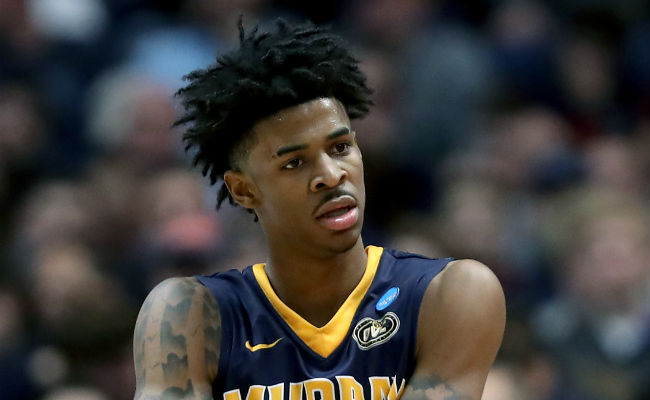 The real intrigue left in the 2019 NBA Draft is what will happen after the New Orleans Pelicans draft Zion Williamson. The Pelicans won the right to pick first in the draft last month, and while it’s uncertain whether Zion will get to play with Anthony Davis, it’s clear the Pelicans will take the Duke prospect.

After that, well, it’s still uncertain whether Murray State standout Ja Morant or Zion’s Duke teammate R.J. Barrett will be taken second overall. But an extra level of intrigue comes from what will happen on the endorsement front. Williamson has received interest from pretty much every shoe company in sports — including the one owned by Master P. But no matter where Morant is taken, it’s clear he will sign with Nike.

The Athletic’s Shams Charania reported on Monday that Morant will ink a deal with the shoe giant, locking up one of the biggest prospects of the draft weeks before he finds a team.

Shortly after that, Morant tweeted a picture of himself in a Nike hoodie, clearly a bit of pre-signing marketing that the two sides prepared for an announcement of their partnership.

All my life my parents worked for a check. Now I’m proud to say I work for the check. #Nike #NikeBasketball pic.twitter.com/b1mTTJLySr

It’s a big move for Morant, who was a fireplug at Murray State and brings a world of potential to the NBA for whatever franchise decides to take him. The focus of Endorsement Season, much like draft season, is undoubtedly Zion, but after the flurry of big pickups Puma made with last year’s draft class it seems at least one major prospect is headed to Nike this summer.