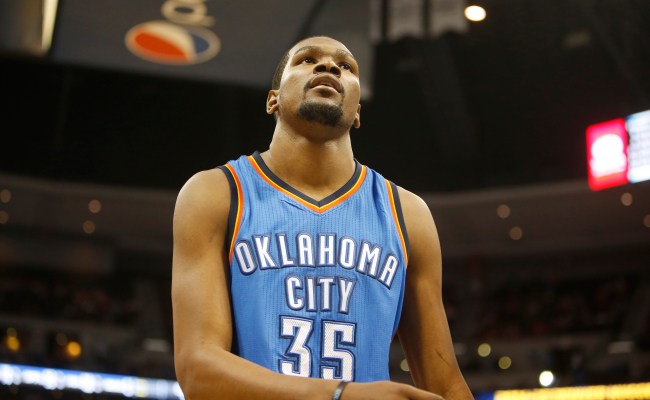 After missing the first 17 games of the season and four of Oklahoma City’s last eight with a nagging toe injury, Kevin Durant was finally back in action last night against the Nuggets and reminded everyone he’s still dangerous from deep. One stretch late in the second quarter was particularly vexing for anyone who remains convinced the Thunder are playoff longshots.

Starting with a three at the 2:35 mark in the second, Durant added two more triplets back-to-back-to-back to give the Thunder a 66-50 lead.

Unlike the reddit headline where we found the below GIF, KD did not hit back-to-back-to-back-to-back threes but did hit a trio of them in a row before Andre Roberson got a steal and Russell Westbrook got a dunk.

Then KD got fouled from beyond the arc, pretty much the only defense the Nuggets coud play, and the Denver crowd sounded excited he might add a fourth. It rimed out, and he connected on 2-of-3 from the stripe. On the very next possession, however, Durantula hit his fourth three-pointer in less than two minutes of game action.

KD finished the second session with 16 points on 4-of-6 from deep. He scored 24 points in the first half and added another 16 in the second half to secure his 43rd career 40-point game. He finished 13-of-19 from the field and 7-of-11 from beyond the arc and the Thunder won 124-114, even after getting outscored in the final session.

Kevin Durant was back (at least for the night), and he’s not taking any guff about that All-Star nod, either.