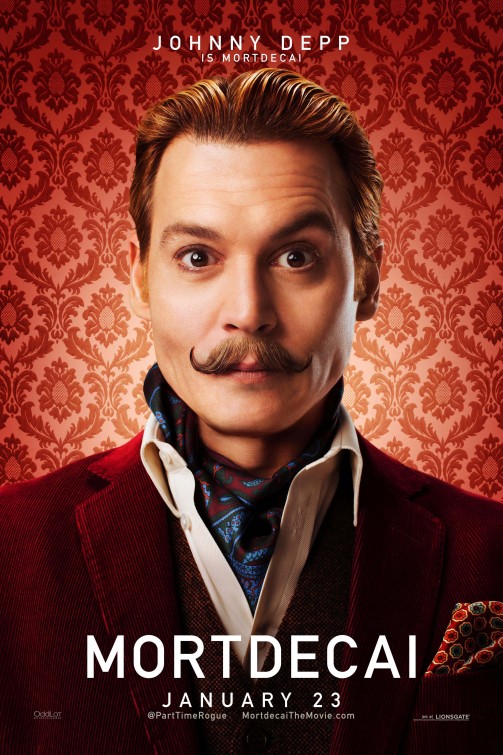 No one will see Mortdecai. That we can agree on, right? I mean I saw it, but you could make the case I didn’t, because I can only remember that Johnny Depp had a mustache in it. Other than that it’s mostly seashell noises. But that’s not why you’re here, is it? You want the truth, the truth about why Johnny Depp only mugs for the camera these days, why he keeps picking terrible roles (note: these two things are related) and why the hell this totally benign inert gaseous buggery is rated R. Well strap on that ben wah ball, because we’re about to get frisky! Frisky with answers!

You know, I didn’t actually hate Mortdecai. I didn’t love it, I only laughed twice, and one of those jokes being about shellfish allergies. But I could at least appreciate the overall goofiness of making an R-rated film meant to appeal to fans of the Steve Martin version of The Pink Panther. Plus, wowsers, that Johnny Depp. The man can chew some scenery, muggin’ and jiving, giggling to himself for a joke only he gets, making effete little noises and acting as though he invented the concept of cheshire grins. There’s nothing like Johnny Depp going right now, no one producing the string of absolute horror on the big screen, no one so famous for so few wins. Except for Chocolat. That film rules.

This here is the story of a shady art dealer enlisted by MI5 to help them locate a stolen painting. The film pedigree that comes to mind would be around The Thomas Crown Affair, Ocean’s 11, with maybe a dash of Entrapment chucked in there for spice. Mortdecai is none of those films, not nearly as cohesive or competent. Instead it is The Tourist (Golden Globe Nominee) mixed with Dark Shadows. As you can probably already tell, there’s not much reason for it to exist, though it’s more plain silly than actively terrible. That’s gotta be worth something, right? I mean, I’d watch this film 1,000 times again before I watched The Lone Ranger. Did you happen to see that one? It was enough to make a man take to the streets in support of less free expression. Mortdecai is merely what happens when you put a bunch of grade schoolers in charge – The Lone Ranger is what you get when you’ve got studio execs sitting around a table actively thinking about how to do even worse work. And succeeding.

So yeah, Mortdecai is another in a long line of films seemingly made so that Johnny Depp can stare into a camera and say, “Mmmmmm?” Has he somehow forgotten that the camera is a thing that records as well? In his mind it is a golden cyclops that gives him money every few years, and all he has to do is wink at her. For this staring contest he plays Lord Mortdecai, sort of an old-school English chap in the vein of Peter Sellers as Jacques Clouseau. His wife is Gwyneth Paltrow, who I always sort of forget is charming on the big screen. Paul Bettany plays the Mordecai family bodyguard and manservant, the cleverly-named “Jock Strap”. Enjoy that one, potential audience members.

Anyone out there remember that scene from Pride and Prejudice, the Keira Knightley one, where the vicar fellow comes to dinner and makes a bunch of thinly veiled fart jokes for daaaaaaaays? Well, that’s pretty much all of Mortdecai. Not with flatulence, but with everything. One of the running jokes is that Wife Paltrow doesn’t like Mortdecai’s new mustache. This joke is told 20 different ways, in 20 different variations, to the point where you think the writer might have had a stroke while in the process of writing. I mean, at some point it’s no longer a callback, it’s a cry for help. Another recurring joke involves Mortdecai continually hurting his faithful bodyguard, Jock Strap. I’ll pause here for you to laugh at that joke again. He gets shot, run over, and shot again – yet he keeps a smile on his face and a gentle thumbs up for Mortdecai. There’s a chance he might be a hopeful stand-in for the audience, hey guys, just stick with us, or perhaps some sort of metaphor for the post-industrial complex. Whatever the case, he’s fully tiresome. 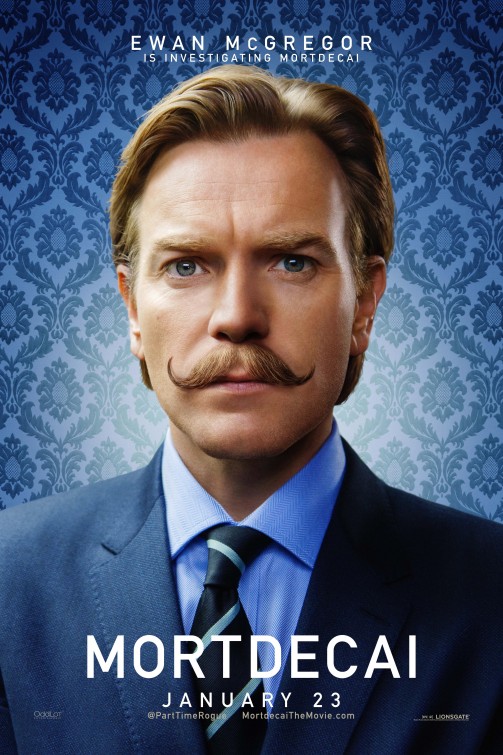 Ewan McGregor is the MI5 agent, and he and the Mortdecai family have history because he loves Gwynnie Paltrow and her GOOP. There’s another running theme for you to ponder, our boy Mortdecai constantly worried about Ewan attempting to plow his special lady. You should know that none of this will result in a punchline, merely Austin Powers-lite style winking, nudging, and then smirking. Paltrow, for some odd reason, is helping Depp with his attempt at the recovery of a stolen painting, but she’s doing it clandestinely, so the film has somewhere to cut back to. Also, they are $8 million dollars in debt, so they’ll have to pull off some big scam switcheroo so the film can tack another 15 minutes on. Lionsgate is all about value!

In the end, this forgettable piece of cinema is another in a long line of cute carcasses. Mortdecai isn’t any good, but it does features moving pictures and sounds, and if you’re homeless, it could be considered a warm place to park your grocery cart for a few hours. Other than that, there’s not much to say, if you want to do this at home just preen at your mirror, touch yourself, but never reach fruition. Don’t want to spoil the mood with action!

Laremy is on Twitter and mugs all the time, but he never makes any money of it.