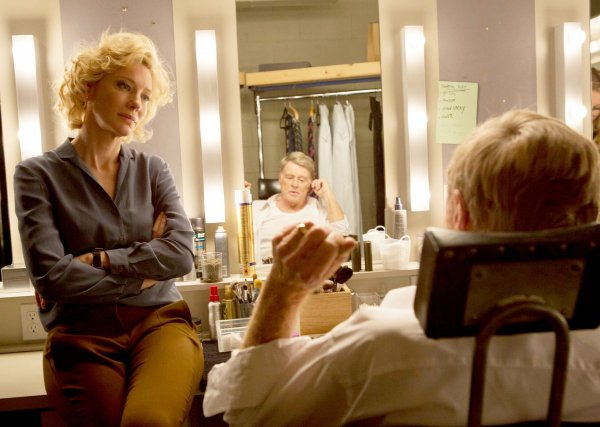 Adapting a book by former CBS News producer Mapes (played here by Cate Blanchett), first-time director James Vanderbilt (writer of Zodiac and White House Down) tells the story of the 2004 CBS News investigation into George W. Bush’s record at the Texas Air National Guard — and the subsequent witch hunt that cost Mapes and Rather (Robert Redford) their jobs. If you’re like me and you could only vaguely remember Rather resigning in disgrace but none of the details, Truth‘s timing is perfect.

As the film tells it, the root of the controversy was a single suspect document, provided to Mapes and Rather by Air National Guard Col. Bill Burkett (Stacy Keach), a memo about Bush’s poor attendance record. (Did anyone really think Bush didn’t get a sweetheart deal because of his name? There must be some kind of irony in going to great lengths to prove something people already assume.) Mapes and Rather (and the rest of their team, a punk ex-gossip reporter played by Topher Grace and a military insider played by Dennis Quaid) didn’t need the memo to make their case, but they included it anyway, and Bush’s people were able to cast just enough doubt on it to bring them all down (spoiler, but also real life).

Truth does a brilliant job getting to the root of what journalism really is — people asking questions, and trying to learn everything it’s possible to learn — and the root of the public’s misconceptions about it — that it can ever tell us objective truth. Bush’s lawyers destroyed Mapes and Rather for failing to “confirm” something that was essentially unknowable. At its most basic, journalism is a lot like a criminal case. It usually comes down to eye witnesses, and humans are inherently unreliable. Worse, in journalism, there isn’t much incentive to do it right; only a disincentive to question the powerful. As the case of Rather and Mapes shows, you can go down just for not being perfect.

Truth is at its best when depicting the journalistic process and what drives the principals. Blanchett’s Mapes is sort of beset on all sides by people telling her to hurry up, cut corners, and ask fewer questions. And then once her story’s filed, she’s surrounded by the same people asking why she didn’t ask more, as if it’s the most intuitive thing in the world. They attack her character, as if only the preternaturally unbiased are qualified for her job, when in fact, as with Jeremy Renner’s character in The Hurt Locker, it’s only a kind of sick, semi-masochistic addiction that drives anyone to do it in the first place. You’re asking for dispassionate detachment from an adrenaline junkie?

The problem with Truth is that it seems blind to the fact that Mapes’ and Rather’s brand of journalism helped to maintain the same misconceptions that brought them down — the idea of the mythical, authoritative, perfectly objective “News Man.” People expected Dan Rather to be perfect partly because CBS presented him that way: an imaginary creature who smiles when stories are happy and frowns when they’re sad, who never has a bias and is perfectly objective even to those who’ve wronged him, simply because he’s built of better stuff than the rest of us. Dan Rather would never lie to us, look how well he wears a suit! He’s America’s dad! (In the movie, Mapes even calls Rather “Dad.”). Truth doesn’t just depict this dynamic, it endorses it. There are times it plays like Truth: A Tribute To Dan Rather.

Rather As Dad-God is just one example of Truth‘s frustrating traditionalism hindering a good story. I hate when I’m watching a true-story narrative and instead of being caught up in the action, I’m thinking Oh come on, did that really happen? There are a few too-slick elements that make Truth feel phony. Like Mapes’ abusive father, who, a helpful expository character explains, would “hit her just for asking questions.” Later in the film, Mapes says of her Bush story’s critics, “They can’t hit us just for asking the question!” I’m not saying something that hokey could never happen in real life, but if it did, cite your sources.

The bummer of it is, Truth is thought provoking when it comes to the status of journalism in the culture, it just has a massive blind spot about its own place in that. I don’t want to hit it just for asking the question, but I can’t help but wish “Truth” would’ve avoided some of the same old BS myth-making.