This week in This Week in Posters, we begin with The Birth of the Dragon, starring Phillip Ng as Bruce Lee. (I can’t believe I had to look that up.) This poster is a lot better, focusing our attention on his razor sharp cheekbones and chiseled jaw rather than the awful bowl cut like the last few. I like the font too. And the background illustrates our favorite new weird poster trend, sparks! That being said, does “Birth of the Dragon” sound a little too close to “Birth of a Nation” to you? Discuss.

As for the rest of the poster… hmm. This seems to be an odd variant of the close-eyed headbutt. It’s somewhere between close-eyed headbutt (usually used to indicate yearning) and the cathartic moment next to a body of water. What should we call this? The Siamese Sky Ponder? The sky ponder seems to suggest sexual fulfillment.

This is a new poster for The Dark Tower that would make an even better deltoid tat. I also like that the crows look like they’re unbuttoning Idris Elba’s fly.

The art on these is undeniably cool, but would you believe that’s supposed to be Matthew McConaughey? Clearly it’s John Cusack.

This poster for Detroit makes it look like it’s about a prison riot. It isn’t, but aside from that it’s a nice poster. I find the symmetry of it very calming.

Other than the pointlessly mismatched faces/names, I’m loving these new Flatliners posters. They really nail that goofy schlock tone I’d want from a Flatliners remake. That said, I’m not sure why Nina Dobrev became the joker after death. Death really messes with your eyebrows, it seems.

Damn, I was really hoping the “random assortment of people looking bored shot from above” design trend would die after Now You See Me.

This is for The Glass Castle, and the subjects seem to all be staring at the imaginary glass castle in the sky. Is that what the title means? I’m not looking this up. Also, it seems there’s a growing subgenre of films about kitschily-dressed white families taking road trips in old cars.

I didn’t realize this poster for Ingrid Goes West was supposed to be an Instagram account at first. It doesn’t quite capture the fun of the actual movie, but it’s a cool concept.

This is the first of a big batch of character posters for Kingsmen: The Golden Circle. Wait, gentlemen wear burnt orange or whatever color that is? I think that’s why I didn’t love the first one. It’s working at a level of irony I can’t quite understand.

Goofy outfits and winking: the movie. But BRITISH.

You couldn’t have given the gadget man some gadgets? I do love that coat though.

It’s hard for me not to instantly hand over my money to any movie that promises Jeff Bridges in an ascot, but the tone of all these posters is “Aren’t we hilarious?” Like are the characters supposed to know they’re in a silly movie? That seems like a weird choice.

Aw, dammit, do I have to see this now? 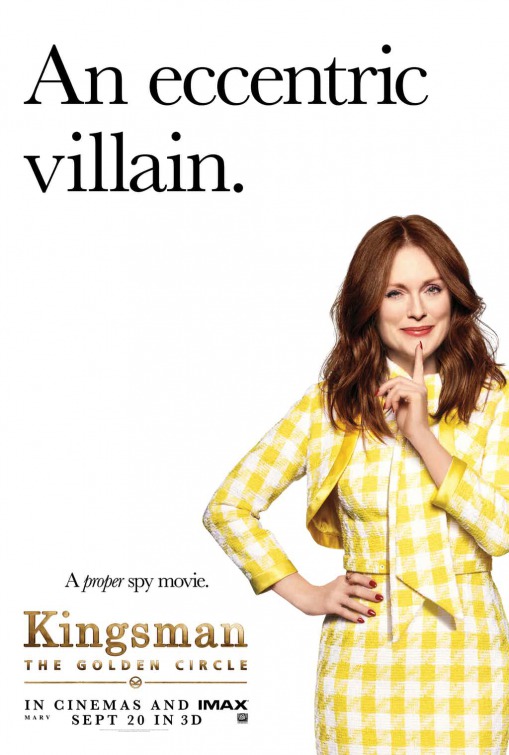 Okay now I’m back around to not seeing this again. Thanks, Julianne Moore looking pleased with herself.

Apparently Van Gogh is played by Robert Gulaczyk. I had to look that up because I thought that was Ralph Fiennes.

Hmm, I don’t speak French, what does “Un feel good movie hip hop on craque” mean? Such a mystery. Is this the first time we’ve seen a pull quote on a foreign poster? Anyway, this movie looks rad. I just wish the ladies would smile at me like that when I start doing raps about them on the hood of their cars.

This poster for Suburbicon reminds me of the opening of Weeds. Remember Weeds? Anyway, this poster is cool. I understand all of it except for the red mountain thingy inside the torso. Is that where they “slice” out your soul or whatever? Damn, I need some more coffee, I’m getting bad at metaphors.

This has dice and “true to the game,” which would make you think it’s about an actual game of some kind, but I’m guessing they mean “game” as in the drug game, as in “charge it to the game.” Is there a name for what happens when you no longer remember a metaphor as a metaphor, like with the dice here? Anyway, this poster looks like the cover of a self-produced DVD someone would be handing out on the subway. So nice job!

Okay, so I think I understand the mask and the vault. Like, he’s a bank robber. But then what about the fire and the silhouettes in the fire? And why is James Franco there? At this point, I feel like you could just pull a DVD out of a drugstore bargain bin and it’s like 50/50 that James Franco is on the cover. What’s he doing there? Who could know?

Damn, I only had to wait about six posters to see my observation about the lack of foreign pull quotes proved wrong. According to Google translate, “un beau polar” means “a beautiful polar,” which seems promising.

[All posters via IMPA]