America’s first dog cafe, located in Los Angeles, was nothing like I expected. But to be fair, my expectations were pretty goddamn high. I expected to be swarmed by a legion of friendly puppies and to collapse in a fit of joy, sobbing as I mainlined the purest, most unfiltered happiness I’d ever experienced (with occasional breaks to rehydrate my tear ducts with ethically sourced cappuccinos).

Most of all, I expected that I would be so busy with dog-cuddling and coffee-drinking that I would forget about my problems for a few hours and just be as happy as the happy puppies I was about to meet.

But The Dog Cafe, did not match up with my expectations. There was no legion of happy puppies; there weren’t any puppies, at all. And of all the adjectives that could be used to describe the many adult dogs that were there, “happy” is not particularly high on the list.

There was no joy sobbing. There were no tears of any flavor, just the unique feeling that comes from being largely ignored by a room full of dogs for the better part of an hour. In all fairness to both The Dog Cafe and my expectations, there was coffee — though my visit preceded the opening of an espresso bar in the adjoining space, and the coffee in the air pot by the front door was much closer to “hospital waiting room” than Intelligentsia.

Soon, I came to what is perhaps the most unexpected conclusion a person could come to while spending the afternoon at a coffee shop filled with dogs…I was disappointed.

I was just about ready to walk out and bury this story in the bleakest corner of my hard drive, when I ran into Sarah Wolfgang, the owner and founder of The Dog Cafe, and struck up a conversation. She explained why she opened the business and why she chose these particular dogs. And once I stopped focusing on what I wanted The Dog Cafe to be, and accepted the place for what it truly was, I came to another conclusion: The Dog Cafe did not meet my expectations…The Dog Cafe exceeded them. 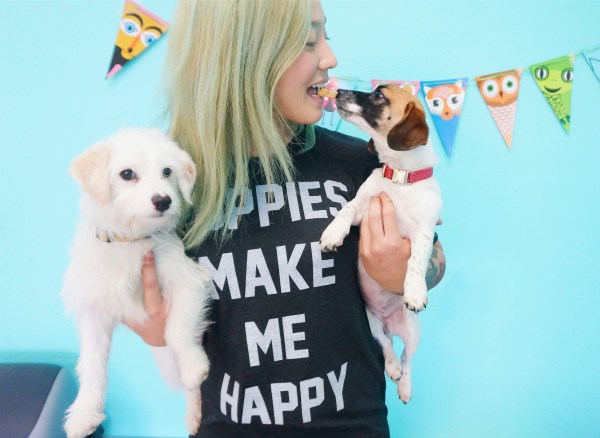 Sarah was inspired to open her business by the dog cafes she visited growing up in Korea, which do look pretty majestic.

But when she opened her dog cafe, she added a very important twist: she didn’t fill the cafe with the friendliest, cutest, and cuddliest dogs. Instead, Sarah chose the least adoptable dogs she could find — dogs who had been abused, neglected, and abandoned — and used the cafe to give them a second chance at happiness.

This is where the battle of expectation versus reality sets in, because whenever I enter a business, I expect that business to cater to me and (more importantly) my ego in some small way. It’s the reason why the tired lady behind the counter at McDonald’s calls us “sir” when she would clearly rather call us anything else. It’s the reason why The Geek Squad waits for us to leave Best Buy before they mock us for the embarrassing poetry hidden in our doc files and the embarrassing pornography hidden everywhere else. The customer is always king, even though (just like most monarchies), the king usually does not deserve to wear the crown.

But The Dog Cafe isn’t designed for customer satisfaction, at least not in the traditional sense. The Dog Cafe, above everything else, exists to rehabilitate, socialize, and eventually facilitate adoptions for these traumatized dogs. These are noble goals that should be supported, but the difficult truth remains: Traumatized dogs, just like traumatized people, don’t always make for the most pleasant coffee companions.

It’s an interesting experience to be a customer at a business that does not cater solely to my satisfaction. Sarah and all the other employees at The Dog Cafe are nice, but their attention was almost entirely focused on the dogs. This is as it should be, but being in such distant orbit from the center of attention, followed by being rejected by so many dogs, made me explore previously uncharted depths of my own neediness. None of the vain, shallow parts of myself — the parts that enjoy being called “sir” at McDonald’s and getting spritzed with cologne by bathroom attendants — were served at The Dog Cafe. I’ve always known that all these touches of “customer service” are empty gestures, but I never realized how much I liked them until they were taken away. 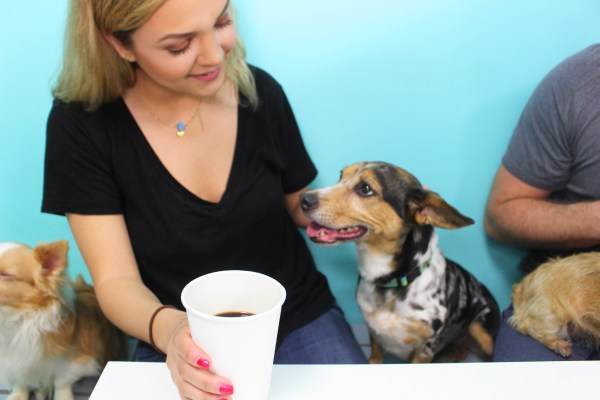 But “customer satisfaction” is a lot like eating cotton candy. It looks fun and tastes sweet and feels nourishing when you eat it, but ultimately it’s only sugar and air and loose carnie DNA. I expected a “cotton candy” experience when I first went to The Dog Cafe. I expected an hour of hugging puppies and drinking coffee, an hour that would be enjoyable, perhaps even transcendently joyous in the moment, and then forgotten soon after.

I did not receive any cotton candy at The Dog Cafe. Instead, I was served a heavy bowl of stew. Stew isn’t “nummy,” it isn’t pretty, and outside of the deeper Slavic territories, kids won’t be lining up for it at the fair. Stew is never fun or exciting, but it nourishes us in a way that cotton candy never could. And once I stopped waiting for the cotton candy that would never arrive, and I accepted the stew that was so clearly in front of me, I started to truly enjoy my time at The Dog Cafe.

I realized that I was wrong to expect the false smiles and the forced reverence of “customer service” because I was never a customer. I was there to help the dogs. I wasn’t just helping with the ten-dollar entry fee, though that probably could buy a fair bit of kibble. I was helping the dogs by showing them one more human who is not like the humans they had known before. I was helping the dogs by being around them without actively causing them harm, distress, or pain. That doesn’t sound like much, but considering the abuse and neglect these dogs have endured, it’s important.

Sarah and the rest of the employees at The Dog Cafe are doing the real work of rehabilitation and socialization, but I like to think I helped those dogs, even if it was just a little. Because however these dogs are being helped exactly, they are clearly being helped.

Dogs who cowered and growled on my first visit were taking treats from my hand when I returned a few weeks later. Dogs that were shy and skittish on my first visit were approaching strangers and even (eventually) sitting in laps. Dogs that seemed completely hopeless, had somehow found a sliver of hope in those weeks. Witnessing these transformations may not have been as fun as getting trampled by puppies, but it was something even more important than fun: it was satisfying. Not customer satisfaction, but actual satisfaction; the satisfaction that sustains us, just like a heavy bowl of stew. 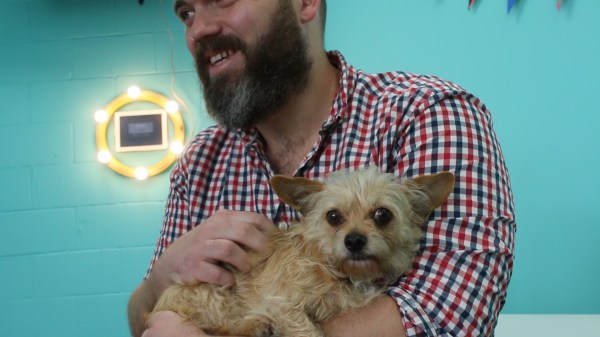 I went to The Dog Cafe expecting it to be fun, and it was not fun. Instead it was satisfying. And that might not sound like much, but it’s the highest compliment I can give.