Want To Interact With Wildlife? Here’s How To Do It Without Being A Total Jackass 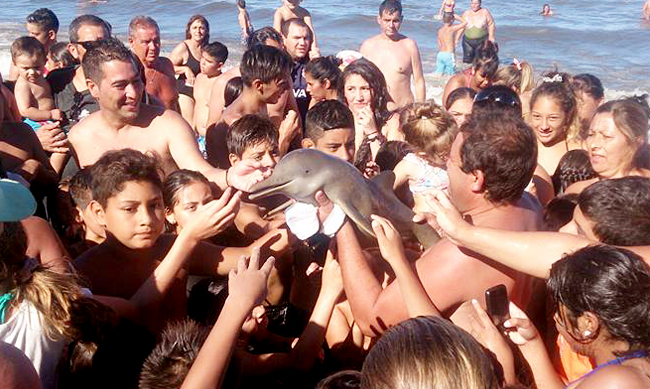 “Oh yeah, you went to Disneyland, Paris? Well, I participated in an endangered animal selfie-mob, top that.”

Cliff’s Notes version: An endangered Franciscan (La Plata) dolphin died after being pulled from the water so that tourists could take pictures with it. There’s some question now as to whether or not the animal was actually alive prior to the selfie-orgy, or whether or not it was already sick and dying, but I don’t care. There was nothing respectful about the way the animal, whether alive/sick/or dead was handled, and respect, when it comes to interacting with animals, is paramount.

Clearly, a sense of respect for animals is all too easily forgotten — if it’s even learned at all. Who knows which of those two possibilities was the case in the La Plata dolphin incident, or in this even more recent incident at Palm Beach, Florida, in which a shark was pulled from the ocean and forcibly restrained for a selfie opportunity.

Whatever the case and reasons for human misbehavior, now seems like a good time to step back, reflect, and consider whether we as individuals and as a collective species are practicing mindfulness, self-control, and empathy. While humans are still animals, we are such extraordinary animals that we don’t always recall that we are still part of the natural world and that there are appropriate ways to interact with that world. We’re surrounded by bustling cities, bumper-to-bumper traffic, and prepackaged, sanitized meals twice-removed from the animal they once were. Our needs are gratified instantly; we don’t have to trek to meet other animals at the watering hole. We don’t have to fail at the hunt 50% of the time while our children hide in the tall grass from other predators. We don’t have to worry that the rock we plan to take a rest at is actually a bigger animal in disguise. Free from those concerns, it becomes easy to forget that other animals have them.

In short: It becomes easy to forget that we’re animals, too.

As a human, it can also be easy to fall into the trap of believing that you’re above other animals, that you have dominion rather than responsibility. That they owe you everything, rather than you owing them something. I’d like to argue that, given our extraordinary status and position, we do have a responsibility toward the other animals, and that it starts in coming to them from a place of respect.

Respect and empathy for nature and non-human life does not necessarily come naturally. It’s a lesson that must be taught, a lesson that must be shared with our children, and shared often so that it sticks and becomes second nature. This is something that matters a great deal to me. I write often about conservation topics. You can check out my articles here, here, here, here, and here. If interacting with wildlife is something that you’d like to try, I recommend attending an AZA-accredited zoo. At many of these zoos, you’ll have a chance to get very close to, and possibly touch certain species of ambassador animals. The keepers who assist you in these interactions know their animals personally and their species intimately, and will be able to ensure an interaction that is respectful, comfortable, and safe for the involved parties.

Close encounters have far-reaching, incredible effects. For some people, they will be the only experience they have with an animal that they will never see in the wild. For some, they will be an eye-opener, a mind-changer; an animal that they once disliked, feared, or misunderstood has touched them, literally and figuratively. They might be able to confront the hangups they’ve had about that animal, to move forward and think of that animal in a new–even fond–way. For some, it’s a moment that ignites a passion and changes life forever; they’ll go on to purchase sustainable seafood, to study marine biology, to be a voice for the animals in the wild, to live mindfully, every day.

In short, this is all to say that I understand why people desire interaction with wild animals — it can be life-changing. What it shouldn’t be is life-ending. For those of you who agree that this is obvious–and I hope this is most of us–you might not need this guide. But if you saw the La Plata dolphin story and thought something like, “Seriously, is this a big deal? Why does anyone care? It was just one dolphin. There are bigger problems in the world,” then the guidelines below might be for you.

The Animal Gets to Decide the Level of Interaction

If you take nothing else from this guide, take this one direction. You do not get to force a wild animal to interact with you. You do not get to restrain it, corner it, chase it, or otherwise harass it into spending time with you. You wouldn’t force a person into a photo with you this way, and if you did, they probably wouldn’t be happy to spend time with you. Allow the animal to choose to approach you, and to decide how close it would like to get.

Remember that You are a Visitor in the Animal’s Home

You wouldn’t appreciate if someone came to your place, trashed it, moved your furniture, made up their own house rules, and pushed you around. You have a home or an apartment in the city, suburbs, or country. This animal has a river or lake, a forest or a plain. Be a respectful guest by leaving things as you encountered them, or better yet, pick up litter and trash (even if it’s not yours). Don’t take anything home with you that isn’t human-made. This includes animals and even parts of animals that you don’t think are being used anymore. Shell collection, for example, seems harmless, but empty shells are basically empty apartments; someone could have moved in there, and you just took it off the market.

Why take a home home if you can’t even fit inside it?

Don’t Rely On Your Ability to Read Animal Expression, Because People Are Often Way Worse At It Than They Think They Are

The dolphin isn’t actually smiling. Or if it is, you won’t necessarily know, because dolphins literally ALWAYS look like that. It’s just the way their faces are built. If the chimp is smiling, teeth exposed, that’s not a good thing for you, and you should also probably stop grinning back. A dog’s wagging tail does not always indicate that it is happy.

Humans often look for expressions in other animals that mimic our own, but anthropomorphizing expression does no species any favors. There are nuances in behavior that people like to boil down to one meaning because simplification makes life easy, but easy doesn’t always mean correct. Humans and dogs have probably shared life for 30,000 years–we’ve co-evolved and have the closest human-animal relationship imaginable–and we STILL suck at reading dog body-language. I can’t tell you the number of pictures I see posted online of dogs and people, where the people are convinced that the dog is happy, when I’m reading the exact opposite. If we have that much difficulty reading domestic dog body language, we need to respect that we’re going to have an even harder time with wild species.

Some Animals Should Not Be Approached at All

This should go without saying, but you know, so should telling people that you shouldn’t pull a dolphin out of the water, and yet here we are. Don’t try to take a selfie with a bear or a tiger. Don’t try to ride a buffalo (sigh, it’s been attempted). Leave baby animals alone; they’re just starting their journey, and even if they don’t yet know better, you do; it’s important for them to not get too comfortable in the presence of people. There are shells in Australian waters and beaches that look innocuous and will MESS YOU UP. Some animals have laws protecting them and specifying exactly how close you are allowed to get to them and what you may or may not do when you encounter them. It is your responsibility to be aware of these laws, and beyond that, to be respectful above and beyond them.

Humans are indeed extraordinary animals. And we’re capable of doing beautiful, incredible, amazing things for our species and for others. So, what can and should you do for animals?

Here’s some ways to help animals in the wild: