Investigating Where Parenting And Hogwarts Intersect

If you’re like me, you grew up with Harry Potter. You remember the feeling of sheer excitement as the books came out one by one, and counting down the days until the movies were released. Unlike George R. R. Martin, J.K. Rowling was able to keep up with the demands of both the moviegoers and the book readers, so our wait between books and movies was reasonable. Now that we’ve seen the pressure Martin is under, we’re able to realize just how incredible that feat was. I remember sincerely praying that Jesus wouldn’t rapture us until the last Harry Potter book was released, and that no one would spoil it for me.

In short: I was — and am still — a true hardcore fan. I even have a Harry Potter-themed tattoo (it’s the sword of Gryffindor through the mouth of the beheaded Nagini, designed by my good friend, UPROXX’s own David Pemberton) and even gave my youngest son the middle name of “James,” just like Harry himself. 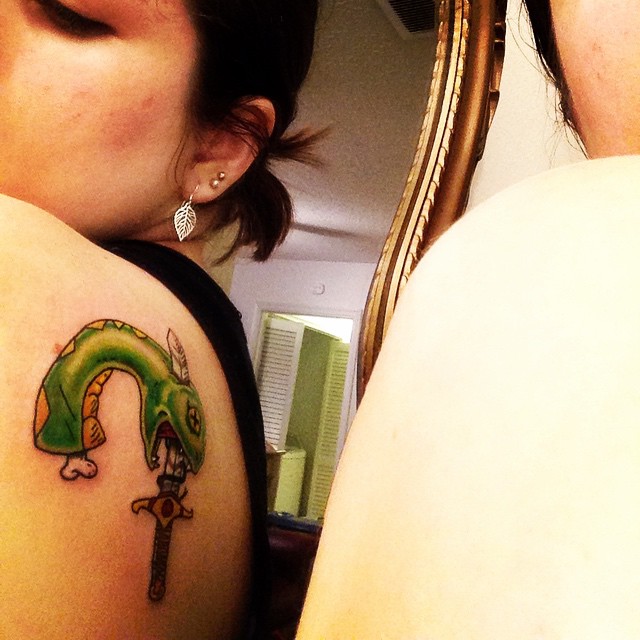 The preoccupation with Harry Potter is the biggest “fandom” some of us ever had as children and young adults, before intense fandom was even a “thing” the way it is now. It was the defining cultural phenomenon of our generation, and it makes sense that it would continue to affect us deeply — which is particularly interesting as many of us enter into parenthood.

As we age and grow into the stories with our evolving lives and perspectives, we begin to see ourselves as different characters. When I asked several of my mom-friends which Harry Potter character they identified the most with, the answer was nearly universal: Molly Weasley. She is a character that you probably don’t really “get” until you’re already a parent: The frantic way she worries, the fiercely protective nature, and the constant desire to shower her children with love via homemade goodies. (By comparison, as a teenager, the character I most identified with was Luna Lovegood.)

So how has Harry Potter impacted the parenting style for first-generation readers? I had the opportunity to speak to a few other people to find out: author Christa MacDonald (mother of three), Valerie Leaverton (mother of three), and Alana Acosta-Lahullier (mother of two).

Have you read your books to your children yet?

ALANA: I actually just read the first book to [my five-year-old son]. I had to explain about Harry’s parents a lot because he kept asking about them. He’s never dealt with a death in the family, so I took the opportunity to do my best to explain death to him.

ALANA: He loved it. I read him the illustrated one. Which, by the way, has gorgeous illustrations. He really liked those a lot. And his reward for finishing the book with me (which took like two months) is that he gets to see the movie now.

When did you first read the Harry Potter books?

ALANA: I first read the Harry Potter books in 2002. I was 23 and still reeling from the death of my mom, so it was a nice escape from my grief.

CHRISTA: Right after the first book came out. A friend of mine who is a fellow book-nerd and member of the Complicated Childhood Club told me to drop everything and read it. From the chapter where the letters started arriving, I was sold.

Did your parents approve of the books?

VALERIE: I can remember people asking my mom (she was a middle-school reading teacher at the time) if the books were appropriate due to their witchcraft content. I remember being proud of my mother as she “stood up to” those who believed the content to be demonic by telling them to read it before they banned it. Mom just wanted kids to read and the Harry Potter books were making that happen.

Who was your favorite character then?

Have you reread the books since then?

CHRISTA: Many times. I used to clean house with the audio books playing.

ALANA: I’ve re-read the entire series more times than I can even count, never mind listening to the audio books narrated by Jim Dale. They’re magical and I love them so much.

How do you incorporate Harry Potter into your parenting?

CHRISTA: For our oldest two we use Harry Potter references regularly. When talking about a child who brags about their stuff: “He’s a Dudley.” When they’re being horrible to each other — “Don’t vent your inner Slytherin” or “Hey do you remember that scene in book…” to illustrate some point we’re trying to make. It’s something we have in common that’s a neutral source.

ALANA: We actually say spells when we do something. Like turning on the lights. The kids will yell, ‘LUMOS!’ and then hit the switch.

VALERIE: As a mom of teens, you try really hard not to say, “when I was your age” because this typically causes them to shut you out completely. So, having a frame of reference that they can relate to is helpful. I guess relationships are the hardest part of helping your children navigate their way to being productive, well adjusted, adults. Harry Potter teaches us a lot about the importance of friend choice, sticking by your friends even when their actions are disappointing, and how to support and encourage your friends rather than tearing them down. Loyalty is very important to me which is probably why I’m so drawn to the themes and messages of the series.

How do you read the books differently?

CHRISTA: Now when I read them I have ‘parent feels’ at certain spots that never gave me trouble before.

ALANA: Since I started reading them to [my 5-year-old] I’ve been kind of forced to look at it through the eyes of a child, which has been really nice and exciting, too. I love re-reading them now because of the different perspective.

Do you find yourself inspired by specific parents in the books?

CHRISTA: Molly Weasley. She loves hard and kicks ass. Killing Bellatrix was no mean feat. She isn’t a MILF and couldn’t care less. And the Burrow is my fantasy house — lopsided and a bit cluttered, but it’s a place you feel welcome, a part of things, comfortable. One of the scenes that really stands out for me, I think it’s near the end of book four, she hugs Harry and he almost cries because it’s the first time he’s ever been held by someone who loves him. Another is in book five when she’s facing the boggart because every mom has a boggart in her head.

ALANA: Molly Weasley is my parental role model. There is a woman who loves her family fiercely, encourages them, and disciplines when necessary. I f*cking love her.

VALERIE: I love the way Harry’s parents support him, even if it is from the other side. I would like to think I’m the kind of mother who allows her children to make choices with guidance rather than just telling them what to do. Obviously, if you’re dead, you don’t have a choice. I’m definitely the kind of parent who would jump in front of a bullet (or killing curse) to save my child.

Which house would your children be in?

CHRISTA: Ravenclaw for the oldest two, but the youngest — who knows. I’m leaning towards Gryffindor for now.

ALANA: I think [my 5-year-old] would be in Hufflepuff. He’s very friendly and loyal and so loving. I think he’d do well there. [My 3-year-old] …. I’m torn between Gryffindor and Slytherin. The child has zero fear, but she’s also very cunning. I think the hat would have a tough time sorting her.

How do you hope to pass on your love of Harry Potter to your children?

CHRISTA: We asked both kids to wait until they were at least 10 before they read the books or saw the movies. We explained that they’d get more out of the books, or at least we thought they would. I like to believe they have.

ALANA: My hope is they love the stories as much as I do. And so far so good!

VALERIE: A lot of our family memories revolve around Harry Potter. For my oldest daughter’s 11th birthday, I sent her friends their Hogwarts letters, made chocolate frogs and wands, and bought every flavor beans. We also surprised her with a trip to Universal. We waited in line for 75 minutes to get into Olivander’s. She was selected from the crowd for the wand selection. That moment was beyond magical and I think that if you asked her still, she would say that was one of the best moments in her life… I don’t have to pass the love of Harry Potter on to my children, it’s something we all share.