Let’s face it, neon signs are America. Be it a Coors Light sign in a college dorm room or a strip club marquee that jumps at you from the side of the road, neon serves as a beacon of light that calls to us in all hours of the night.

And these guiding lights, in all their colorful twisted forms, come that way out of the box, right? Well, not so much. The task of building neon lights is a master craft filled with passion, 1,000-degree flames and more broken glass than probably anyone wants to admit. It’s highly specialized much like chainsaw wood carving or blowing glass.

You’re probably thinking: What’s a glass bender anyway? Is Eastlyn the Criss Angel of the neon sign trade, shaping signs like balloon animals with some special blend of mind voodoo? Eastlyn explains it best himself.

“A neon glass bender is someone who likes heat, fires. They enjoy sweating in front of a flame for hours on end, bending glass tubes and then at the end of the day, injecting that neon tube with either neon or argon,” reveals Eastlyn about his craft. It’s a trade he’s spent two decades mastering… and one he says is “not for the timid.” 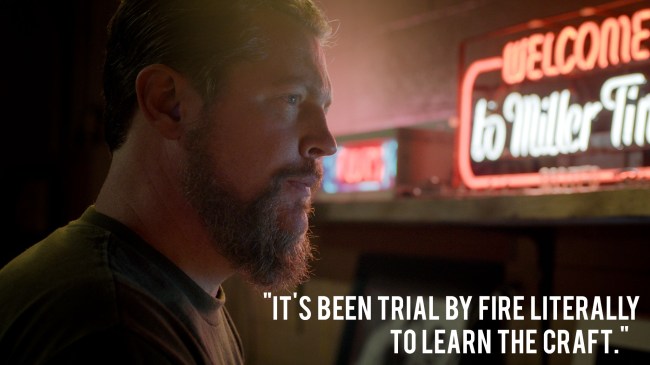 How Eastlyn fell into it is actually kind of funny. He found himself hitting on a woman one night in a bar at her father’s birthday celebration. The woman, who’d later become his wife, was the daughter of Dave Brimley — the owner of Brimley Neon, a neon sign-making outfit that originally started in 1930.

Sparks flew, and from there, Eastlyn married into a family business and started refining his craft day by day. “It’s been trial by fire literally to learn the craft,” he confesses. One that he seems to be doing pretty well at since his father-in-law now proudly calls him “one of the best benders — if not the best — in the country.”

By the way, not the safest the thing to do. Other than dealing with the aforementioned 1,000-degree flames and molten glass, there’s also high-voltage transformers to contend with, gas and shards of breaking glass. Without intense focus, you’re liable to end up in the ER, or at least badly burnt from any temporary lapses in judgment.

So, Eastlyn writes songs in his head while he works to stay grounded.

“When I’m at the shop, I’m constantly either listening to music or writing music,” he reveals. “I can’t say I’d be a songwriter if I didn’t have all this time to imagine where a song would go when I’m bending glass. It all feels very connected to me.”

At this point, Eastlyn feels a duty to do it since it’s a trade that’s dying a little bit everyday, thanks to an EPA ruling almost a decade ago about removing lead from glass (incidentally making it more difficult to bend). As a result, Eastlyn is literally one of America’s last neon sign makers. But he and the others at Brimley Neon have made it their mission to keep this craft afloat despite difficult times.

“I’ll do my best to keep the tradition going as long as I can,” says Eastlyn about a career that could one day become extinct. “If I don’t teach someone else how to do this, I believe it could be completely lost.”

There it is, a cautionary signal… one written in neon light. 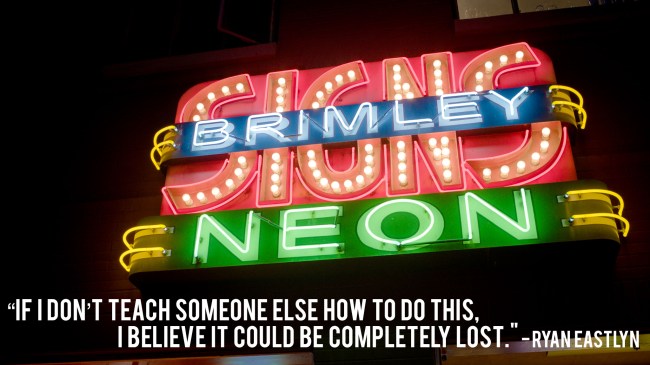