There’s a few things that separate man from beast.

2. An appreciation of sassy jazz.

From the first caveman who turned a rousing evening of stick rubbing into an evolution-changing innovation, fire warms our homes, fills our bellies, and keeps humanity at the top of the food chain. But despite the awesome, nature-spiting power of fire, the most convenient tool to harness this incredible force–the simple pocket lighter–has become largely disposable and forgotten. We have taken humanity’s greatest gift, and we have lost it in our knickknack drawers.

In 2015, there are still a few very good, a few very bad, and a few very in between reasons to carry a lighter, so let’s reclaim our fire-starters from the bargain bin at the gas station and the void under our car seats, and use a vessel that is slightly more worthy of the precious flame: the Plazmatic X.

Because there’s only one thing that’s better than fire…and that’s a fire sparked by goddamn laser beams! I repeat: laser beams. Since it’s flameless and wind-proof (because again, laser beams!) the Plazmatic X is even TSA approved (though using this on an airplane would definitely fall under the “very bad reasons to have a lighter” category). Best of all, since it’s completely electric and USB rechargeable, you’re never far from reclaiming your human right of fire mastery. 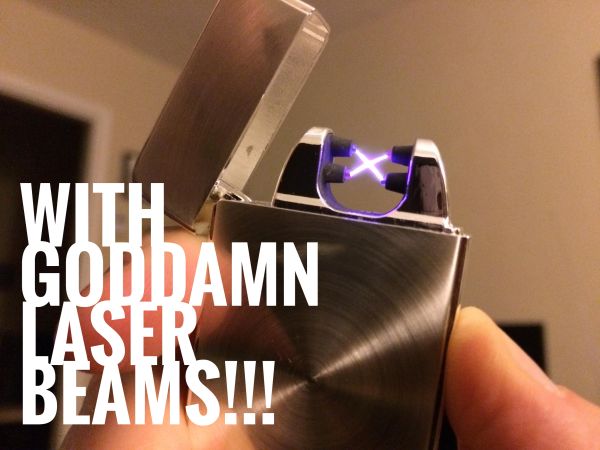 If you can’t handle having the equivalent firepower of a tiny, malevolent robot in your pocket, then you can always rub sticks together like a filthy Neanderthal. But if you really want to give the finger to the rest of the food chain then order a Plazmatic X here.