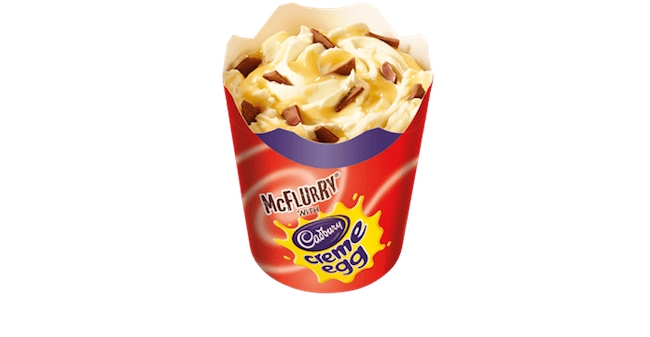 Congratulations to Australia! The home of raining spiders, giant snakes (which the spiders eat), and the infamous drop bear now has something else to celebrate: the continent’s version of McDonald’s–which is actually significantly better than American McDonald’s in a million small, but noticeable ways–has just announced a Cadbury Creme Egg McFlurry that sounds like it will rot your teeth, give you diabetes, and make you the happiest person alive all at the same time. (This is the company’s second-best decision after disclosing it may be selling beer at some locations.)

According to a press release by the fast food giant’s Australian arm (which is surely muscular, tanned, and scarred up from snake bites), the McFlurry will include bits of chocolate and Cadbury Creme Egg topping mixed in with soft-serve (which even in America is the best soft serve you can get from a chain), and comes in a special paper cup which proudly announces exactly what you’re eating to a jealous public. The only downside? The McFlurry isn’t available until after 10:30 a.m., so whoever told you that you could eat ice cream and candy eggs for breakfast when you became an adult is a giant liar.

Need something that’s just as delicious, but don’t want to travel all the way to Australia? You can buy yourself a Dr. Pepper milkshake at Burger King (which may not be the same thing, but is so delicious you’d have one for every meal if your heart/good sense allowed it).