It’s getting to where you can’t swing a dead cat around here without finding out it’s “National Swing a Dead Cat Day.” Seriously, put the kitty down, resuscitate him, and give him a belly rub — he’s earned it. Are we expected to stop what we’re doing and go passing out pieces of peach pie just because the calendar says so?

Of course not. These pseudo holidays are ridiculous.

What’s that you say? It’s National S’mores Day? Well, shut your butt and hang on a sec. That’s kind of amazing. Too often, we take the gloriousness of the s’more for granted. We hastily shove some crap marshmallows in our bag along with some bummer of a chocolate bar and, “Dang it, we forgot the graham crackers!” Now we’ve got our family eating s’mores smushed between goldfish and saltines. I expect better of us. We can do better. Time to come together as a nation and make some kick ass s’mores.

Witness the glory that is the Maillard reaction (in which food browns and changes flavor when cooked above a certain temperature) as it takes hold of our white sugary blob and converts it into a glorious, caramelized wonder. “OH GOD, YOU DROPPED IT IN THE FIRE!” Quick, pull it out and act like you aren’t about to put something ash-covered in your mouth. Now, press that molten, gooey, sugary mass between two bars of chocolate. TWO bars of chocolate. We aren’t animals here!

Wait patiently as the carry over heat from our fire melts down our chocolate, converting it into a sticky, succulent sauce that coats the inside of our still crisp graham crackers. Relish in the oozing marshmallow and swirled chocolate concoction and note the textural explosion of the crisp graham. That’s what this is about.

Now get going. Find some sticks in the woods or finally use the ridiculous giant skewers you bought for no good reason. Pack your bags and head to the park, campsite, or trashcan fire and find a way to make this day happen! What’s that? You’re scared of bugs and don’t want to sit on a pokey rock? Wuss. Lucky for you, there are some chefs out there who are quite obsessed with this confection.

The Resort at Paws Up (Greenough, Mont.) 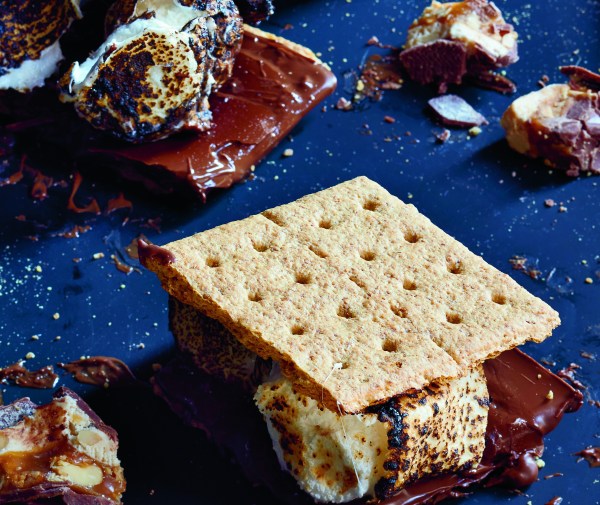 By far the most true to form can be found at “The Last Best S’more” event at The Resort at Paws Up in Montana. It’s luxury glamping, so there’ll be no stumbling around in the dark looking for the soggy bag of marshmallows you accidentally got hot dog water in. They’ve been perfecting the experience at this Montana ranch for the last 10 years, and will be creating a 100-pound s’more that you should probably get in on. 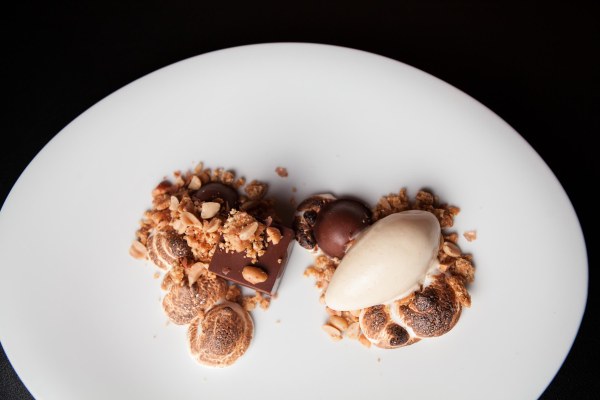 Rather sit in a restaurant with your s’more? Chef Lisa Bonjour at MK in Chicago has come up with a Sandlot s’more homage “You’re Killin’ Me S’mores” with graham cracker ice cream. It looks exquisite, even though I’ve never seen The Sandlot. *Waits patiently for Danger Guerrero to break down door with a DVD in hand.*

The ridiculously gorgeous Westin in Vegas has s’mores for the whole family during their beach party offered every Friday. Vegas has never seemed to have much family appeal, maybe s’mores can change that. 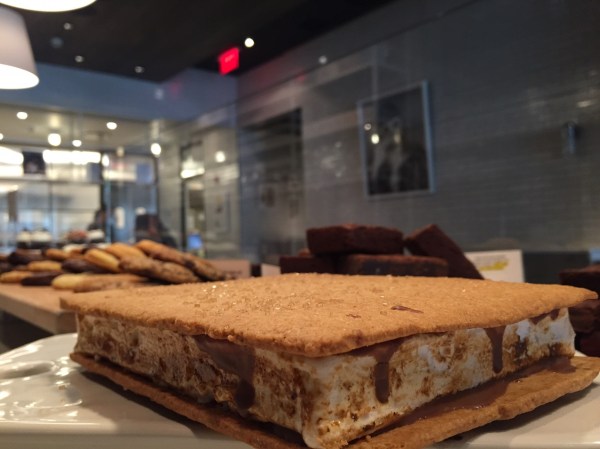 Are you manically depressed? Or just manically depressed about hosting a party for eight to 10 people and don’t know what to serve for dessert? Well, either way, the “Giant S’more” from Sherry Blockinger’s Sherry B Dessert Studio in Chappaqua N.Y. is just the thing for you. It’s massive, but can still fit in your oven.