According to our exhaustive research, we’ve found that it is generally frowned upon to eat the characters of a Hollywood blockbuster while watching said Hollywood blockbuster. Have you ever tried to gnaw on Matt Damon during a screening of Jason Bourne? Dude ain’t having it. Luckily, a solution has been found and no one has to resort to cannibalism. (That’s generally the best type of solution.)

Eater reports that Austin’s Alamo Drafthouse is serving up a very special menu for moviegoers checking out the Seth Rogen R-rated animated offering Sausage Party. Those cute lil’ food friends can now be shoved in your mouth and ingested while you watch the film and maybe you’ll even gain their powers too. Here’s the menu that lays out what characters you can shove into your gob. Need a cocktail to drown out the whole “I just ate those foul-mouthed heroes” feeling? They’ve got those too. 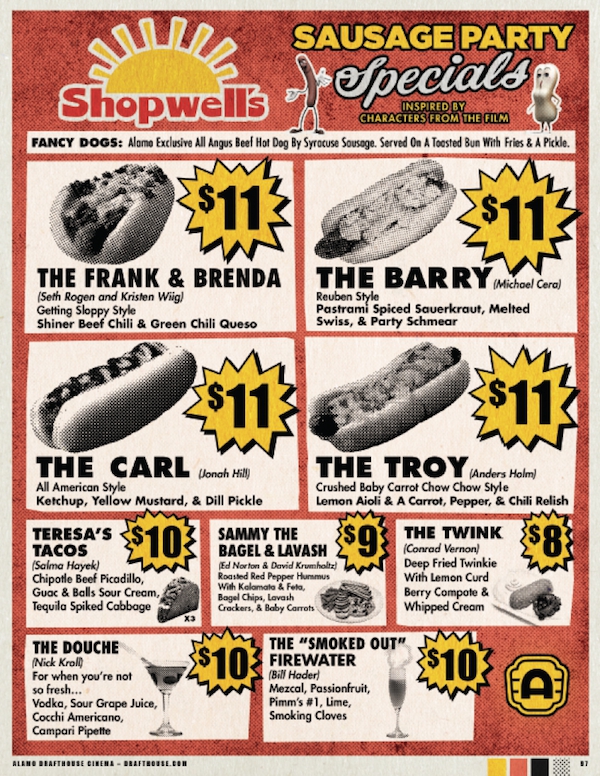 Check your conscience at the door and dig into plump, all-beef sirloin hot dogs served on pillowy soft fresh buns in four different styles, all modeled after the lovable, bite-able “Fancy Dogs” on screen. Mow down on “Teresa’s Tacos,” nosh on “Sammy Bagel & the Lavash,” or get a sweet taste of the “The Twink.” Wash it all down with a refreshing (and guilt-reducing) craft cocktail, like the “The Douche” or “The ‘Smoked Out’ Firewater.”

On top of the opportunity to eat silver screen characters without remorse and with mustard, there’s also a coloring book for sale that the theater bills as being “verrrry R-rated.” For $6, moviegoers will get the opportunity to color naughty things from the movie and help the character Frank navigate his way through the “Glory Maze.” It’s borderline educational, really.

Sausage Party opens nationwide on August 12. No word yet on if Alamo Drafthouse would consider a similar approach to Cannibal Holocaust if their themed food Sausage Party presentation is a smash.