We got a better look at Batman v Superman last night, courtesy of Jimmy Kimmel Live, and the new trailer both confirmed a few rumors and raised a few questions. Like, for example, if we can ever trust Michael Shannon again. But let’s start from the top, shall we?

Is That Jimmy Olsen?

Batman Is A Bond Fan

This is likely just a sight gag… but of course Batman would love the Aston Martin.

Do Batman And Superman Know Each Other’s Secret Identities?

Before being interrupted by Jesse Eisenberg’s Willy Wonka-esque Lex Luthor, the interchange between Clark and Bruce sure comes off like they know each other’s secret identities and are winding each other up. A nice touch is that Supes calls out Batman’s rather flagrant disregard for civil rights.

Superman Is Popular In Metropolis, At Least

Boy, they got that statue up quick, huh? 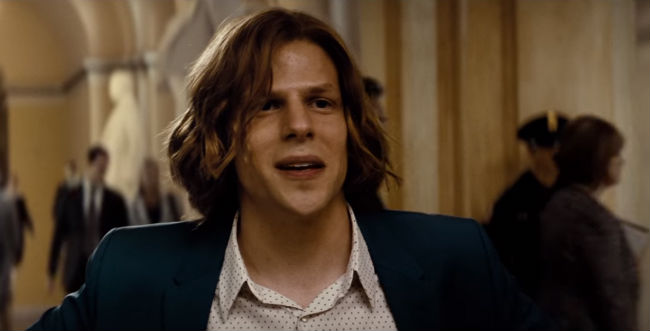 It appears the Senate hearing Supes attends early on has Luthor there, as well, and trying to manipulate Holly Hunter’s character to his advantage.

We’ve already seen in a few places that Bruce is in Metropolis when Zod invades, but the trailer has a series of shots that indicates we’ll be seeing that entire climactic fight from the perspective of somebody on the ground, unable to fight back.

The Battle Royale Is All Luthor’s Idea

While one hopes Luthor has an actual motive and isn’t just doing this for the evulz, he does appear to drive the plot and very much wants Superman dead. He even confesses to Lois Lane at one point in the trailer.

Wait, Are Those Parademons?!

One thing that’s definitely out of left field is the appearance of what appears to be a bunch of wasp-themed soldiers in power armor, who similarly do not appear to be fans of Superman’s cult army that Batman is beating up. And they sure look a lot like Darkseid’s foot soldiers, the Parademons. Hmm, perhaps Justice League will feature a certain New God?

Showing once again this movie has a somewhat dry sense of humor, the creation of Doomsday has a couple of Frankenstein references. Also, Luthor appears to be doing this right in front of Superman’s statue, which is kind of a dick move, huh? Oh, speaking of Doomsday!

It appears Michael Shannon is in this movie after all, or at least a CGI effect with something resembling his face is in it. And now we know to never trust him again. He also has heat vision of a sort in this interpretation, and it isn’t pretty…

Finally, we get a slightly longer glimpse of Wonder Woman, who neither Batman nor Superman seem to know. At least, not yet; we’ll see how long it takes Bruce to realize he’s met Diana before.

Now all that remains is to see the movie. We’ll finally see Bats deal with Supes in live-action March 25.

Now Watch: Who Will Win In ‘Batman V Superman: Dawn Of Justice’?