Does Chris Hemsworth Play A Believable Hacker In ‘Blackhat’? (And 24 Other Urgent ‘Blackhat’ Questions) 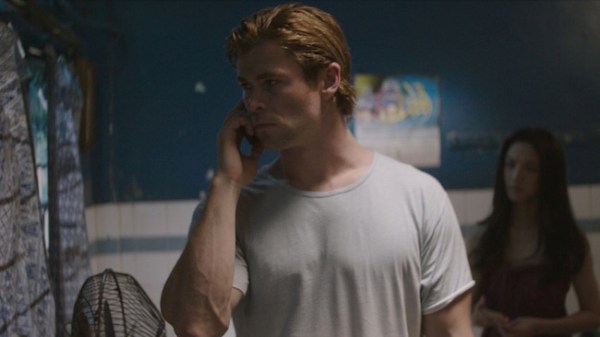 In Michael Mann’s first film since 2009’s Public Enemies, Chris Hemsworth (Thor) stars as a black hat hacker named Hathaway in this week’s new release, Blackhat. Should you spend the money that you earned in compensation for the work you did this week on Blackhat? What exactly is a black hat hacker named Hathaway? As a service to you — you — we have seen the movie and will now answer every question you could possibly have about Blackhat.

Q: What is a black hat hacker?

A: It’s a term applied to hackers who seek personal gain or are just in it for general mischief.

Q: Who is the black hat hacker in Blackhat?

A: That would be a black hat hacker named Hathaway, played by Hemsworth.

Q: Have you been able to stop saying the words “black hat hacker named Hathaway” to yourself since seeing the trailer for Blackhat?

A: No. And I am considering medical attention.

Q: Why is Hathaway in prison?

A: As we learn, this is actually Hathaway’s second time in prison (which all feels unnecessarily complicated). The first time was for being involved in a bar fight (I suppose to establish the fact Hathaway can fight, which he does often during Blackhat), the second was for his work as a black hat hacker named Hathaway for eight years – which got him 14 years in prison.

A: For a little bit, I can’t guarantee it will stop.

Q: How does Hathaway get out of prison?

A: A nuclear power plant in China is attacked by hackers and Hathaway is the only person who can help.

Q: How is that even remotely possible that he’s the only one who can help?

A: The lead investigator for the Chinese, Chen (Wang Leehom), is Hathaway’s former college roommate. Hathaway also wrote the code for original virus that was used by the attackers, so he’s the only one who fully understands the virus.

Q: Is there any chance that Hathaway has a romantic relationship with Chen’s sister, making all of this even more kind of ridiculous?

Q: Did Chris Hemsworth decide to do a voice that sounds like a cross between Sylvester Stallone and Vin Diesel that strangely disappears halfway through the movie?

Q: What are the terms for Hathaway’s release from prison?

A: Hathaway makes a deal with the U.S. government that makes him a free man, as long as his information helps capture the hackers.

Q: How many years has he served so far?

Q: Since Hathaway was away for five years, does he do something dumb, like try to download the latest version of Netscape, or something?

A: 2010 wasn’t that long ago (and the latest version of Netscape was released in 2008, so Hathaway would already have that) but in computer years, it might as well be 50. But, Hathaway doesn’t seem too impeded by new technology, even though he’s been in prison for the last five years.

Q: How is that possible?

A: To be fair, Blackhat hints that Hathaway would sneak in some technology here and there while in prison, but it may have been worthwhile to address the fact that things have changed while he was away.

Q: Does everything go swimmingly for Hathaway after he’s released from prison?

A: Hathaway runs into some problems when, in trying to gain information on the hackers, he hacks into a NSA program called Black Widow.

Q: Does Chris Hemsworth say “Black Widow” in an exaggerated way, then looks at the camera with a wink and a shrug?

Q: What is the biggest problem with Blackhat?

A: Well, first, it’s one of the ugliest movies I’ve seen in a really long time. The action sequences look like they were filmed using your parents’ smooth motion television setting. I’m not big on the film versus digital debate, but a good portion of Blackhat (filmed in terrible-looking digital) looks horrendous.

Q: Does the technology look good in Blackhat?

A: I am an admirer of Michael Mann’s body of work, Manhunter and Heat are two of my favorite movies. I am even in the minority of people who liked Public Enemies. But Blackhat suffers from “What people over the age of 55 think the Internet is” disease. Blackhat gives us a look at crazy digital pings going every which way. It’s the kind of imagery that Angie Bennett from The Net would assume 2015 looked like.

Q: Should I see Blackhat?

A: Even after all that, Blackhat is still OK enough, I guess, for a January thriller – and there are at least a few scenes in which it feels like Mann is shooting with his A-game. But, boy, at 133 minutes, it feels really long.

Q: If you’re going to be blurbed in this weekend’s commercials for Blackhat, what quote do you hope is used?

Q: When people are typing on keyboards, does it make a grating sound like a keyboard from, say, 1998?

Q: Will I feel bad about my own typing speed after watching Blackhat?

A: Everyone types at incredible speeds in Blackhat. If a storyline was introduced that Hathaway has superpowers and one of his powers was “fast typing speed,” the movie would feel more realistic.