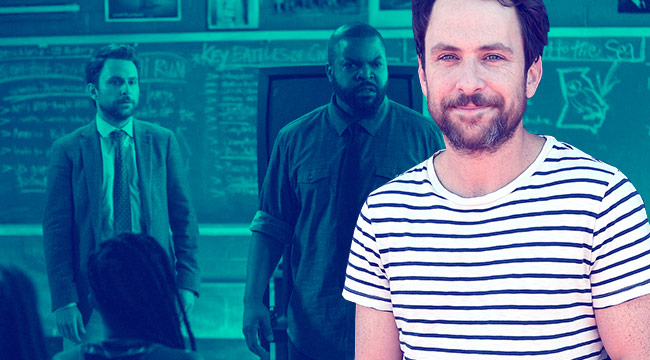 In Fist Fight, Charlie Day plays Andy Campbell, a mild-mannered teacher who finds himself scheduled to fight another teacher, Ron Strickland (Ice Cube) right after school at three o’clock. If this sounds at all familiar, Fist Fight is loosely based on the sort-of cult classic 1987 film Three O’Clock High, which featured a meek high school student challenged to a fight by the new resident troublemaker, Buddy Revell.

As it turns out, Charlie Day isn’t a huge fan of Three O’Clock High (which may have bummed me out way more than it should have) and believes the story was ripe for a quasi remake – but that didn’t stop Day from pondering what Buddy Revell might be doing today. Ahead, we spoke to day about fighting (neither of us really know what we’re talking about when it comes to that) and also gives us an early report on the production of Pacific Rim: Uprising, which, like most big movies like this, is shrouded in secrecy.

I am a fan of Three O’Clock High.

Well, I think it’s pretty fair to call it a remake of Three O’Clock High, but with teachers. But I guess it can’t be a remake unless you do like the exact same characters and stuff?

I bet he’s a success.

You know, I didn’t watch Three O’Clock High again until after we were done making this one. I mean, I certainly just made sure – like asking questions to make sure we weren’t repeating anything too much – to just kind of focus on telling this particular story. And then I rewatched it, and I don’t know – maybe I was just tired when I saw it, but it didn’t hold up as well…

I remembered it being a better movie. But it’s the kind of thing where sometimes I feel like movies shouldn’t be remade or touched – and then when I went back and watched it and I’m like, oh, yeah, this isn’t Citizen Kane.

But Paul Feig shows up in it.

Oh my God, I didn’t realize that. I’m going to have to look for him. Was he wearing a suit?

I want to say he is.

But Buddy Revell wasn’t stupid, so I think he is a success now.

I’m probably one of the few people who have seen that movie, for most people this is going to be brand new.

And look, if it’s not, it’s no different than High Noon or any other movie that’s like, “Hey, there’s a gunfight.” Three O’Clock High didn’t exactly break the mold. But yeah, either way, I think if you’ve seen it or if you haven’t seen it, I think you can still enjoy this one.

The opposite of that is a funny pull quote, “Three O’Clock High broke the mold.” No one has ever said that.

A movie where someone confronts someone else? Oh my God.

People fought in a movie?

Are you good in a fight?

Am I good in a fight in real life?

Gosh. Probably not. I mean, it’s been so long. I’ve been punched plenty of times and stand on my feet, so I’m probably okay in a fight. But it’s probably better not to be in one. At this point, nothing good could come out of it.

It would be weird at our age to be a person who fights.

It would be weird. Someone could actually get really hurt. I could certainly get sued. I can’t see an upside in being in a fight.

How hard is it when you’re in a movie fight not to actually hit the other person on accident?

Yeah, I think that’s true. I think you have to make it look as real as possible, and that means you’ve got to be coming real close.

Have you filmed your stuff for Pacific Rim 2 yet? Are you working on that?

Yeah. I’m in the middle of it right now.

No one knows too much about it.

I can’t say too much. I mean, I don’t know how the rest is going, but my stuff has been going really well. And Steven DeKnight I think he has kind of really good vision for what to do with the sequel. And the cast is really sort of eclectic. It seems to be going really well.

There were on again, off again rumors about the sequel happening for so long. Were you actually surprised when they called you and said you’re actually going to do it?

No, I mean, because anytime a movie makes that much money – you know, they want to make money.

It was weird because the first one under-performed domestically, then cleaned up internationally.

Yeah. Well, first of all, these are like fun, high class problems of, oh, we’re really upset this has only made $100 million in the United States. You know, like we only broke even here. So it’s a bit confusing because I don’t run a movie studio.

I’d be in favor of you running a movie studio.

Well, yeah. You would love it if I did, but there would be a lot more movies like It’s Always Sunny in Philadelphia. But I can’t ever tell their expectations: what’s a hit or what’s not. So I think I knew that the movie was financially okay. And then I was in close contact with Guillermo [Del Toro], because we stayed friendly and he’s been on Sunny several times. And I would talk to him about what he was working on and he was working on the script. And then when he had to step off the movie I wasn’t sure it was going to happen. But I was excited that it still came together.