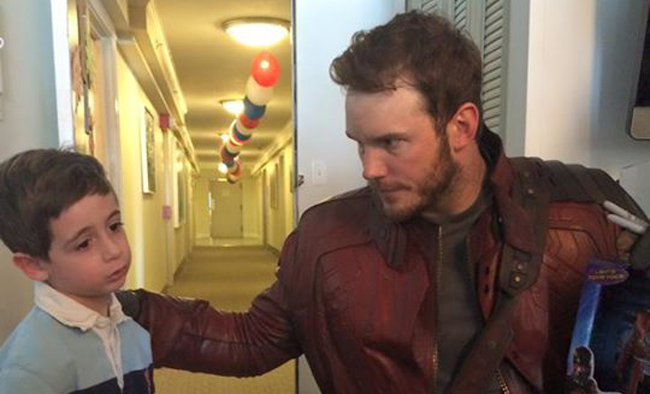 Last month Chris Pratt and Chris Evans entered into a pretty incredible Super Bowl bet. The terms: If the Seahawks won, Patriots fan Evans would show up at Seattle Children’s Hospital in character as Captain America. If the Patriots won, Seahawks fan Pratt would show up at Boston children’s hospital Christopher’s Haven in character as Star-Lord from Guardians of the Galaxy. There were really no losers here, especially after we found out that they also raised close to $30,000 for the organizations.

Well, we all know how the game turned out, and thanks to that game-saving interception by Patriots defensive back Malcolm Bulter, the kids at Christopher’s Haven got quite a treat. Two treats, actually, because in addition to Pratt living up to his word and appearing in full Star-Lord regalia, Evans showed up in a Tom Brady jersey. Good dudes doing good things. Very cool.