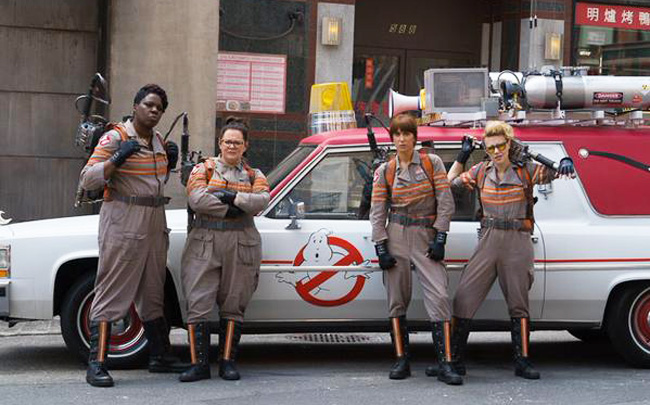 To promote the newly released Ghostbusters: The Ultimate Visual History, original Ghostbuster and one of the creators of the franchise, Dan Aykroyd, sat down with Entertainment Weekly and director Ivan Reitman to talk about how the original movies came together as well as how the upcoming one materialized. It’s a great interview that reveals a journey that began in Aykroyd’s basement during a three-week writing retreat and ends with his unwavering confidence in Paul Feig taking over the reigns.

Aykroyd and Reitman discussed the script for a third Ghostbusters movie called Hellbent, which involved the original cast ending up in Hell. But Murray never really committed, and time kept crawling until 2014 when the other original Ghostbuster and writer, Harold Ramis, passed away. Any hopes of a reunion were shot. However, as Reitman said, “it was time” for a new crew.

“For much the same reason that the original Ghostbusters couldn’t really be the stars of this movie, including Harold who passed away, it was time to get fresh blood in there.”

Hellbent, by the way, is what keeps fueling the rumors that another new Ghostbusters with another cast might still be in the works (or not). When you consider that it was the last thing they all worked on with Ramis, it makes a little more sense that they’re having a hard time letting it go, especially if they liked the story so much.

Reitman, who said he might see an early cut of the film within two weeks (!) added:

“I believe the movie is going to be quite wonderful, because I know the cast works. The ladies in this new film are in every way as talented as that original group of actors were. They’re at the same place in their lives as Bill [Murray] and Dan and Harold were when we did Ghostbusters. I have a lot of faith in it, and I have a lot of faith in Paul.”

The whole interview is a very interesting and enlightening read, but the biggest takeaway is how connected to the original Ghostbusters the new one will be despite being very fresh. Maybe that can calm down all those people who are bumming Kristen Wiig out.