There’s no simple formula for making a great movie. If there was, everyone would use it. They’d just plug in a little of this and a little of that, slap it all together, and bingo bango cinematic magic. But if you walked up to me and pulled out a gun and demanded that I list some things I look for in a movie (which is a strategy I imagine Hollywood studios will turn to once they run out of things to reboot, remake, and re-imagine), I’d probably tick off the following things:

And so, it is with great pleasure that I introduce all of you to Steal, aka Riders, which features every item on my list except the last one, because the last one only happens in China Strike Force. The plot of Steal, in a nutshell, is as follows: Steven Dorff plays Slim Severin, a rollerblading, BASE-jumping bank robber who gets mixed up with crooked cops and a murderous pastor with a pompadour when he stumbles into $20 million in untraceable bonds, and Natasha Henstridge plays a detective who investigates him through a process that involves rock climbing races and fornication. Like all good investigations. Or, to put it another way…

Slim, Otis, Frank and Alex (three boys and a girl) form a group of snowboard and skate young bank robbers. They are known as masters of the runaway art. Slim, the thinking head hatched a plan for their final retirement: five consecutive burglars, in five days, involving 20 million dollars. But this time, they’re gonna have to face both the police – and the mafia!

Here’s my favorite thing about that description: Despite making little sense on account of it being written by an anonymous user whose first language does not appear to be English, it is the summary that appears at the very top of the movie’s IMDb page. As it should. I’m all-in on any project that introduces me to the sentence, “They are known as masters of the runaway art.” Which, I mean… he’s not wrong.

That happens during the opening credits. Steal is everything you’re thinking it is. Let’s discuss.

Steal is kind of like The Thomas Crown Affair if Pierce Brosnan’s character was a spiky-haired, bleach-blonde bank robber who loves the X-Games

The film opens with Slim and his crew robbing a bank and making their getaway by doing grinds and rollerblade stunts through midday traffic until they lose the cops by joining up with a rollerblade race that is taking place in a park. Literally the perfect crime. They follow this up with a second robbery, in which they hit an armored truck and lead the police on a high speed chase that involves multiple wrecked cop cars and a helicopter flying preposterously low through downtown (like, maybe 40 feet off the ground, between skycrapers and whatnot). And just when it looks like they’re cornered by the police, they escape by driving the armored truck directly into the river — backwards! — so they can make off with the loot. The movie makes no attempt to explain how they survived this and got the money out, by the way. They just drove the truck into the river and then were dry and counting their money like five minutes later, like the answer was so obvious that it didn’t even need to be addressed.

All of this happens in the first 18 minutes. I love this movie.

Two other developments take place here: One, the gang realizes that they kind of accidentally stole $20 million in bonds, which leads to the whole corrupt cop and deviant pastor thing I mentioned earlier and will elaborate on in a bit. And two, while making his first escape, Slim bumps into Karen, the cop played by Natasha Henstridge.

Their relationship also leads to one of my favorite plot twists ever. As their relationship develops, Karen very clearly suspects Slim of being up to something, but she doesn’t really have proof. That all changes when the cops are together in the station watching surveillance footage of one of the robberies. And it changes because — I swear to God this is true — she recognizes Slim’s neck tattoo that is peeking out from under the back of his mask. His neck tattoo! The big plot twist in this movie is a cop identifying a BASE-jumping bank robber because she recognized his neck tattoo from when they were humping in a sauna after an indoor rock-climbing race!

And it gets even better! When she confronts him about it, his response — and again, I swear to God this is true — is to offer this iron clad defense.

The bad guys are all incredibly, hilariously bad

There are three bad guys in this movie. We will address them one at a time.

The primary antagonist is Detective Magruder. You can tell he’s a bad guy right away because he’s a huge sexist who is always calling Karen “honey” or “sweetie” and dismissing her ideas at meetings by a) telling her to leave the police work to the men, and b) telling her she’s giving him a huge hard-on. (At the same meeting he tells Karen about his erection, he says this about Slim’s crew: “The only thing we know is that they’re under 30, they got ice water in their veins and they can skate.” I repeat: Steal is a great movie.)

Magruder is also the corrupt cop who has been secretly forcing Slim’s crew to pull more robberies, and who, in the above screencap, has displayed the illegally obtained proceeds from one of the robberies on his desk, despite his desk being squarely inside the police station. It’s best if you don’t ask questions.

The second bad guy is the deviant psychopath pastor played by British actor Stephen Berkoff, who is doing an… interesting Southern accent here, and who has been in a million movies but will always be Victor Maitlin from Beverly Hills Cops to me. This is a screencap from the end of a Bible lesson he gives to children about — again, swear to God — not stealing pies out of windowsills.

He’s been hired by the mob to retrieve the bonds, because he’s a pastor who moonlights as an enforcer. Obviously. Here are some things he does in the movie: Almost drowns a young naked woman by holding her head underwater in his luxurious bathtub to force her to perform oral sex with him while he is on the phone; throws someone out a window; kills a bond trader in a parking garage after producing a knife and pronouncing “skin a rabbit” as “skeen a rabbeet.” Like I said, it’s an interesting accent.

The last bad guy is Jerry, the pastor’s associate. Jerry shows up, starts tossing around the N-word very, very liberally, then this happens to him. 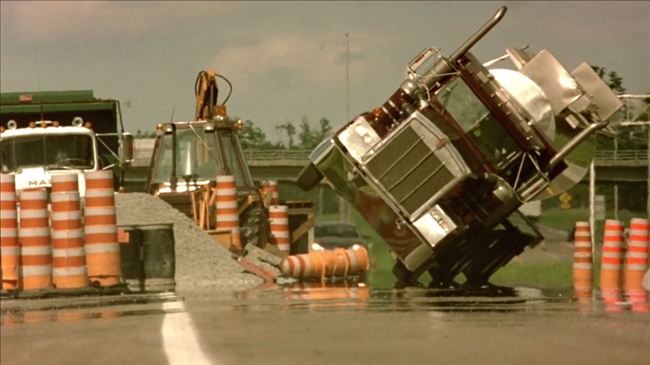 Yup, happens. And the heist ends with all of them BASE-jumping off a bridge to safety. Well, not “all” of them. You saw what happened to Jerry. And the female member of the crew, Alex, gets shot and killed. This probably sounds like an important plot point, especially once I tell you that she and Slim appeared to be semi-involved romantically at the beginning of the movie. But I can’t stress this strongly enough: It is not. She dies and they’re basically like “Welllllp” and then Slim goes back to his high-stakes sex adventure with Karen.

So no, I do not regret leading my discussion of this part of the plot with 18-wheeler cruising on nine wheels while Marilyn Manson plays. I don’t think I would have regretted it anyway, even if they had made a bigger deal about poor Alex. I feel like it sums up the movie nicely.

The ending doesn’t make a lot of sense, but man, do they ever try

Okay, so here’s the ending, in short: Magruder sets them up with one last bank robbery, but they figure out he’s been behind it all, and they figure out it’s a trap, so they go rob a bank across town while the whole police force is at the other location. They wear disguises during the robbery. See that picture up there? That is the disguise Stephen Dorff wears. To the big climactic bank robbery. It is a great disguise.

Anyway, Magruder and company eventually catch on, and the film’s third chase through the city takes place. This one features Slim — again, dressed like that — careening through intersections and parking garages in a van while dozens of police cars chase after him. It’s total chaos, which is probably best left unexplained beyond sharing this GIF with you.

Slim then drives the van to some sort of industrial park to meet with the pastor about the $20 million in bonds, but hides a land mine under the pastor’s seat and then sneaks out the bottom of the van and down a manhole. The van goes kaboom with the pastor and two dead bodies in it (one of which is Jerry’s), and apparently everyone was vaporized or something because the cops just accept that the three people in the van were Slim and his surviving crew, like dental records and DNA aren’t a thing. We also find out they set up Magruder by putting some of the proceeds from their heists in his locker at work. If it feels like this is all happening very fast, it is because it is happening very fast.

With all the bad guys arrested or turned into loose molecules in the air, all that’s left is to tie up the loose end with Karen. Now, given the Thomas Crown similarities from before, you might think Slim’s big plan involves some sort of double-triple cross that ends up with them together on a plane to paradise. Hahahaha, nope, you big dummy. What happens is that he sends her on a wild goose chase after some lookalikes on a passenger plane so he and his crew can escape on a private plane while that “Daydream” song plays.

All that was missing was a note to her delivered by a skydiver that read “Tough break, Karen! Thanks for the sauna hump!” Dorff strikes again!