‘Furious 7’ Is Immensely Enjoyable And Will Probably Make You Cry 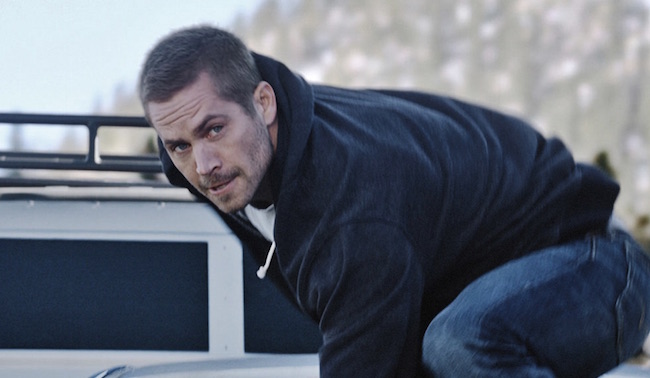 It doesn’t feel like it’s been almost a year and a half since the death of Paul Walker. Maybe it’s because we knew we’d seem him one last time in Furious 7, a movie that was delayed eight months after the accident that took Walker’s life while it was decided how to finish some of Walker’s unfinished scenes. (Walker’s brother and some digital trickery helped finish the movie.) But it’s impossible to watch Furious 7 and not think about Walker the entire time. And as much as I enjoyed Furious 7 — and I enjoyed Furious 7 immensely — I found myself feeling incredibly sad. Most of the time, it feels like one long goodbye.

It’s obvious the cast and filmmakers felt this way, too. I won’t reveal what happens to Brian O’Conner, Walker’s character, but I don’t think it’s too big of a spoiler to mention that the last few minutes of the movie were filmed after Walker’s death, and that every line during this stretch had double meaning for both Brian O’Conner and for Paul Walker. You will cry. It’s impossible not to cry. As I looked around the theater, there were tears everywhere. (Last night, a friend of mine asked me to tell him what happens. As I told him, he started tearing up just imagining the scene.) It’s an odd thing to leave a Fast and Furious movie surrounded by mournful silence, but that’s what happened. I think it hit everyone: We weren’t just saying goodbye to O’Conner, this really was the last time we’d see Walker.

And all of this comes after over two hours of pretty much nonstop action, blazing through set pieces and scenarios that are even more outlandish than the prior two movies. Furious 7 is a two-hour adrenaline rush, followed by one of the most touching, saddest scenes I’ve experienced in a movie theater. Be prepared: It’s quite an emotional 180.

If someone had only seen 2001’s The Fast and the Furious, then watched Furious 7, the film’s tone would be unrecognizable. What started as a series about car racing has now — starting with 2011’s Fast Five — become a grand action extravaganza that more resembles the Mission: Impossible franchise than it does anything about car racing. (So much so that there’s a scene that takes place high up at the Etihad Towers in Abu Dhabi; a little reminiscent of the scene atop the Burj Khalifa in Dubai in Mission: Impossible – Ghost Protocol.) The actual car races now feel obligatory. (I should add, I only started to actually enjoy the Fast and Furious series with Fast Five.)

And Furious 7 does open with an incredibly short car race, as if there’s some sort of court injunction stating that one of these movies cannot exist without a legitimate car race. Anyway, with that formality out of the way, the actual plot of the movie kicks in. Remember Owen Shaw? He was the indestructible villain from Fast and Furious 6 played by Luke Evans. Well, Owen’s older brother, Deckard, who looks nothing like Owen and, instead, a lot like Jason Statham, has vowed revenge on our heroes. After Deckard kills Han-Seoul-Oh (in an event that takes place right after The Fast and the Furious: Tokyo Drift; which, chronologically, takes place between Fast and Furious 6 and Furious 7), then blows up Dom Toretto’s (Vin Diesel) house, our Furious team then vows revenge on Deckard Shaw. So, yes, everyone involved seems to be mad.

Kurt Russell’s Mr. Nobody fills in for Dwayne Johnson’s Luke Hobbs as the government official calling the shots. (Johnson’s Hobbs in in the movie, but his role is limited compared to past films.) He sends the team on an around-the-world adventure in an effort to secure a device that can access every camera in the world, including cell phones, that has the ability to find anyone in a matter of moments. Mr. Nobody needs this device back and Dom, Brian and the rest of the crew agree to get it for him so they can use it to find the whereabouts of Deckard Shaw.

Yes, this is all very convoluted. But, it doesn’t matter: the convoluted plot eventually gives us souped up cars parachuting out of airplanes and a jaw-dropping sequence of a Lykan Hypersport jumping from skyscraper to skyscraper in the aforementioned Etihad Towers. The recent incarnations of the Fast and Furious movies are here to entertain, and they are so self-aware now, that they relish in their ridiculousness. And this is why these movies work: They know that we know, so we are all in it together. We are all one big happy family having the time of our lives.

“Family” is a word that’s tossed around a lot in the Fast and Furious movies. What used to come off as just another thing Vin Diesel says to add a little bit of gravitas to a movie about cars, now comes off as something much more meaningful. There will no doubt be an eighth chapter in this franchise – there’s way too much money at stake – but it’s really hard to imagine these movies going forward without Paul Walker. (I realize he’s not in Tokyo Drift, but that’s almost a completely different movie.) Every member of this team – or “family” – has a role to the audience. Tyrese Gibson is the comic relief, Ludacris is our all-knowing everyman, Vin Diesel gets the cool lines … but Brian O’Conner was the heart. This all sounds like a weird thing to say about an action movie franchise, but there’s a reason why this works, beyond the dazzling effects: People really do care about these characters. But, as this franchise keeps moving forward without Paul Walker, I bet it won’t quite be the same. But, at least in Furious 7, we all get a chance to say goodbye.