A lot has changed in the last quarter of a century. We’ve seen the coming-of-age of the internet and smartphones, and our TV’s are notably flatter (if we even use them at all thanks to Netflix). There’s Google, and Postmates, and apps that allow you to track where your kid is at all times. Also, better airport security, but we’ll get there.

With all those changes in mind, I wondered, “Would Home Alone even be possible in 2015?” The short answer is “no” — but I wanted to dig deeper. Also, I wanted to watch Home Alone (which is streaming on HBO Now) again.  Afterwards, it was clear just how much different our modern world is.

Starting right from the opening sequence…

As the film opens, there’s chaos in the house. As far as I can tell, there are about 82 people under the same roof, all running around and trying to get packed for their impending trip to France while a suspicious-looking cop and an overloaded pizza boy stand in the foyer.

Enter cute, 9-year-old Macaulay as Kevin McCallister. The boy is concerned because Uncle Frank won’t let him watch a scary movie with the big kids. Mom’s distracted on the phone — the landline, it must be noted — and Dad’s asking about a voltage adaptor.

So, okay. That’s all pretty much standard. Mom would probably be texting on her smart phone, but the voltage adaptor situation is still a real concern for travelers needing to shave abroad. And no, Mom’s quip about Dad growing a goatee in France makes no sense.

“Is it true French babes don’t shave their pits?”

And so we move on, into Buzz’s room. Buzz has some super awesome radio thing he’s playing with—who knows what it even is, but it’s obviously going to be replaced by the MP3-playing smartphone he inevitably scores by 2015. That said, Buzz is still a bully — time hasn’t gotten rid of them. Neither has it gotten rid of the weird rumors that tend to circulate around creepy neighbors (even if you can Google “South Bend Shovel Slayer” these days).

The first major 21st-century difference we come to is when we reach the pizza boy, who’s been patiently waiting in the foyer like he has nowhere else to be three days before Christmas. The thing is, in 2015, dude would’ve been paid and tipped online, and out the door as soon as someone took those pizzas from him. (And Kevin would’ve been able to follow along with the process online, ensuring he would get to the cheese pizza before anyone else.)

Oh, and I’m not even going to mention traveler’s checks, because what in the world are those?

Pizza delivered, the next thing that happens is a conversation between Dad and the “policeman” (where did he get such convincing garb anyway?), in which Dad ensures the disguised Harry that they’ve taken the necessary precautions to protect their house while they’re gone.

“Well, we have automatic timers for our lights, locks for our doors,” he says. “That’s about as well as anybody can do these days, right?”

Those days, sure, but not these days. In 2015, Dad could probably have done a bit better. Considering that the movie is set in Winnetka, Ill., a Chicago suburb named the second-richest town in the U.S. in 2015, the house would probably have been tricked out with all sorts of security features controlled directly from a parental phone — cameras, motion sensors, geolocation fences, you name it.

If the parents can afford to fly first class to Paris, they can probably also afford to make sure their house is secure when they’re away from it.

“I hope you’re all drinking milk, I want to get rid of it!”

Okay, so we haven’t yet figured out a way to stop food spoilage in 2015. (We’re trying! Boy are we trying!). But what about that chaotic dinner scene? To bring up smartphones yet again, in 2015 everyone would be fiddling with some device, and the table would be quiet, wouldn’t it?

That said, a kid can still create chaos pretty easily, so the scene stands. (As a kid watching the movie, I always hated the dinner scene, because I actually thought Buzz was throwing up for real. Nope! Just being a bully as always. And can we talk about Kieran Culkin’s appearance as Kevin’s cousin, which I’d never noticed before?)

Here’s where the wheels come off. The entire premise of the movie hinges on the fact that a tree takes out the family’s power, causing them to wake up late and rush around in a frenzy. Everything is so chaotic that no one notices Kevin’s absence until they’re halfway to Paris.

Obviously, this is not going to happen these days. Sure, phone alarm mishaps still happen, but on the night before a flight to Paris? You know Mom’s set at least three alarms on her phone, and made Dad do the same. In 2015, Kevin — along with the rest of the family — is up in time and on his way to Paris. (And the house still gets broken into, but it’s okay, because they have an alarm system to thwart the thieves. See above.)

Also, the phone line issue. It adds another level of desperation to the situation when Mom can’t call home and check on her son, but nowadays, Kev would probably have his own phone — possibly dumbed-down, but still something usable. Mom would be in contact with him the minute she got on the ground. Or possibly earlier, knowing her.

Let’s talk for a minute about airport security, because… wow. The woman at the gate is counting heads? No, no, no, lady. You’ve got to get yourself one of the fancy boarding pass scanners we have these days. I mean, I get that Kevin’s boarding pass ended up in the trash along with the spill napkins from the night before — if you don’t believe me, just re-watch that scene — but this is just gross incompetence on the part of the airline employee.

“No clothes on anybody! Sickening!” 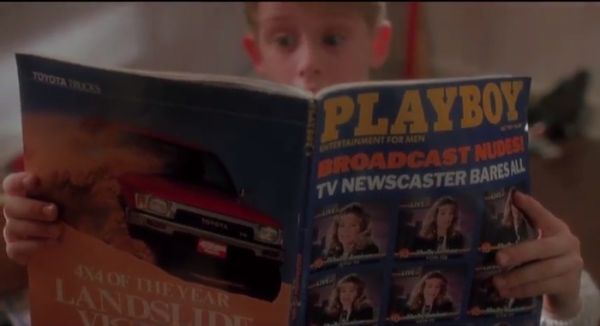 Sorry, Buzz. As of October, you’ll have to find a different nudie magazine to hide away in that trunk of yours. (And Kevin’s probably already snooped around on your Facebook. “Buzz! Your Girlfriend! Woof!”)

“Guys, I’m eating junk and watching rubbish! You better come out and stop me!”

That video player. Those VHS tapes! Also, Angels with Filthy Souls? Is that even a real movie? (Actually, it’s a take on Angels with Dirty Faces. Heh.)

Other than the fact that it would probably look more like Netflix and a laptop in his parents’ bedroom, this is a pretty realistic scene. If I were 8 years old and home alone, the first thing I’d do is make myself a big old bowl of ice cream and plop myself in front of the TV. Heck, who am I kidding? I still do that whenever I’m home alone now, and I’m an “adult.”

Also, How the Grinch Stole Christmas. The classic animated Seuss Christmas feature was already 24 years old and a classic in 1990. It’s definitely not going away anytime soon. So at least that still stands.

“Just give us the phone!”

A squabble over a pay phone? It was a classic trope that the world will literally never know ever again. Like I said before, Mom would have had her cell out by the time the wheels of that American Airlines plane touched the ground, and would be telling Kevin not to make a mess of the house 10 minutes later as she shuffled down the aisle and toward the door.

“Is this toothbrush approved by the American Dental Association?”

That question definitely would have been answered through an online search. If Kevin’s savvy enough to set up multiple booby traps around his house, he’s savvy enough to figure out how to work his parents’ Consumer Reports account. Also, all this grocery shopping. I’m guessing Amazon Prime would have played a factor in his purchases today.

Another pivotal scene that just wouldn’t happen these days: Dad calls the neighbors (good thing they have working phone lines) and leaves a message about the situation with Kevin. While Harry and Marv happen to be burgling the house. Which alerts them to the fact that, yes, Kevin really is home alone. These days the Wet Bandits would have been duped for just a little bit longer.

“This gal has offered us two first-class tickets if we go Friday, plus a ring, a watch, a pocket translator, $500 and..”

Holy what? This is beyond illegal! How in the world is Mom getting away with this ticket trade? I mean, I get that she’s already past security, but still. Someone would catch her these days, right? Right?

“How low can you get, giving Kris Kringle a parking ticket on Christmas Eve? What’s next, rabies shots for the Easter Bunny?”

Santa Claus? Psh. There’s an app for that these days.

“Wait a minute. How did you guys get home?”

How indeed, Mom? You know you would have been in constant communication with Dad — don’t even act surprised to see them. (Also, fun fact: that’s not snow outside, that’s mashed potatoes!)

What, indeed? Dental technology has gotten oh so much better in the past 25 years, meaning that Harry’s signature gold canine would probably have been some sort of a composite resin that matched the color of the surrounding teeth. Unless, cosmetically-speaking, Harry had wanted it to be gold. Which, knowing the guy, he probably did.