Does ‘Hot Tub Time Machine 2’ Retain The Charm Of The First Movie? (And 24 Other Urgent Questions) 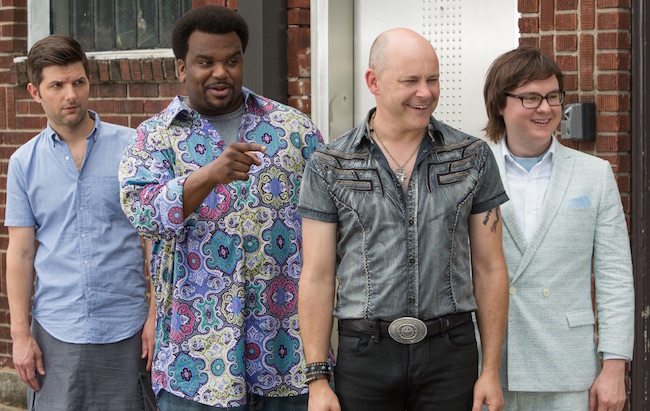 A: Sort of. Lou (Rob Corddry), who stayed in the past in the first movie, is now a wealthy rock star. Nick (Craig Robinson) is also a successful musical artist, having stolen a number of successful songs before they were recorded. Jacob (Clark Duke) just seems glum.

A: John Cusack is not in Hot Tub Time Machine 2.

Q: What happened to his character, Adam?

A: Adam is mentioned a few times – and we see Cusack’s likeness in a couple of scenes – but he’s “missing,” and that’s about it.

Q: Is this one of those movies where a former character is mentioned enough times that we think, Hey, maybe we’ll see a cameo?, and then that never happens?

Q: Do Lou, Nick and Jacob travel back in time again?

A: No, this time they travel 10 years into the future.

A: Lou has turned into an arrogant prick and, while giving a speech at a party, he is shot in the penis. To save Lou’s life, they get in the hot tub, hoping to go to the past, but it sends them instead to the future.

Q: Is Lou dead in the future?

A: No. Which then leads the gang to believe that the killer has come from the future, but hasn’t left the future yet, so there was still time to stop the killer and save Lou.

Q: What other time travel movies are mentioned during Hot Tub Time Machine 2?

A: Terminator is mentioned a lot. Back to the Future is also mentioned. Looper is also referenced, which is nice because that means Looper is now officially part of the time travel movie zeitgeist.

Q: Is Chevy Chase in this movie?

A: For about one minute, yes.

Q: In that one minute does he mange to do his “na na na na na” sound from Caddyshack for no real reason?

A: On a basic level, like described above, it kind of does. But little moments make no sense.

A: There’s a scene in which Nick is filming the video for “Stay,” a song made popular by Lisa Loeb in 1994. But how is Nick just recording it in 2015? Wouldn’t Lisa Loeb have still recorded it in 1994? Wouldn’t Nick have had to record it before 1994 in order to steal it?

Q: Is there an actual explanation?

A: In the script, it’s apparently fleshed out more that Nick has been hiring people who would have been future recording artists so that, with his knowledge of the future, he can later steal their would-be songs. Anyway, this is one example of many to say, “The plot of this movie is a mess.”

Q: Isn’t the plot of the first Hot Tub Time Machine a mess?

A: Yes, but it was designed to be a mess. Hot Tub Time Machine 2 just is a mess.

Q: Did you laugh at all during Hot Tub Time Machine 2?

A: There’s a game show in the future called Choozy Doozy, where the audience chooses what a contestant has to do. The three hot tub time travelers, plus Adam’s son, Adam, played by Adam Scott (Adam!), wind up as contestants, which produces a scene that (A) lasts forever and (B) boils down to “having sex with another man is gross.” It’s hard to understand why a scene like this exists in 2015.

Q: How does the hot tub gang wind up with Adam’s son?

A: For a part of the movie, the gang thinks that Adam, Sr. might be Lou’s eventual killer, so they search for the character who is played by an actor who is not in this movie. This leads them to Adam, Jr. who has never met his father, but he joins the rest of the group for some reason.

Q: Is that the plot of the movie, that Adam, Sr. kills Lou?

A: The gang eventually and arbitrarily decides that the killer is not Adam, Sr., probably because the actor who plays Adam, Sr. is not in this movie.

Q: Is there any reason I should see Hot Tub Time Machine 2?

A: If you want to pay $12 (or whatever) to laugh four times, then sure. It’s missing almost all of the charm from the first film.

Q: In Hot Tub Time Machine 2, is there a subplot about a sentient car that wants to kill Lou?

A: The scene that plays during the end credits.

Q: Does Hot Tub Time Machine 2 borrow its tone from any other movies?

A: It’s weird, instead of borrowing its tone from the original Hot Tub Time Machine, which is a pretty good tone, instead, this second film really wants to be the 21 Jump Street movies.

Q: What is an example of this?

A: About halfway through the movie, Adam Scott’s character goes on a psychedelic drug trip that looks an awful lot like what we see in both Jump Street movies. Also, there’s a montage that involves everyone pointing guns at each other while cool music plays in the background.

Q: Would a better name for Hot Tub Time Machine 2 be 21 Tub Street?