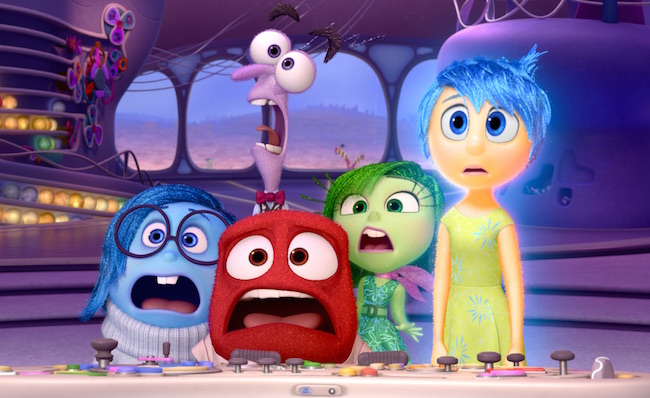 Honestly, there was an assumption that when it was pointed out to Pete Docter that he has the ability with his movies – well, most specifically, Up and now his new film, Inside Out — to tap into emotions that, yes, often end with waterworks, that it would be either rebutted or disregarded. What I didn’t expect was an explanation that, yes, that’s pretty much what he’s going for. He knows you’re crying, and it sounds like that makes him happy.

Inside Out is the story of Riley, an 11-year-old girl who has just moved with her parents from Minnesota to San Francisco. She’s an only child, so other than for her parents, she knows absolutely no one. (Warning to fellow only-children: if you ever switched schools as a child, this movie will get to you.) But, most of the action we see on screen is happening in her head, as five emotions – Joy (Amy Poehler), Sadness (Phyllis Smith), Anger (Lewis Black), Fear (Bill Hader), and Disgust (Mindy Kaling) – do their best to keep Riley in a good place. But disaster happens after Joy and Sadness get lost, and they must find their way back through the maze that is Riley’s brain before it’s too late.

I met Docter at Disney’s New York City headquarters. A whole host of other people were in the room, including producer Jonas Rivers and a team of publicists from both Disney and Pixar. Being a member of the press interviewing a Pixar director is kind of like interviewing the President of the United States, at least I bet that’s how they look at it. If nothing else, I felt safe from physical harm. Docter himself, even in this kind of situation, is warm and open and kind of makes you forget there are so many other people in the room. Ahead, he talks about how he made the movie that might just be the best Pixar movie to date.

As I get older and my capability to express emotions diminishes, you still have the ability to make me cry.

You’re aware that you’re good at hitting that beat, right?

Yeah and really, for me, that’s where I kind of stem from. And I learned this the hard way, kind of coming in from, “Let’s have fun.” And that’s important, but I want to make sure there’s something at the heart of it that I feel is a complex, difficult, true thing that I’ve dealt with in my life. And in this case, it was watching my daughter grow up, which echoed my own difficulties growing up and looking back at the sort of innocence and purity of childhood – at least, that’s the way we perceive it now as adults – and how that’s now gone forever. Which is kind of sad for us, but necessary. Watching my daughter, it’s the same kind of thing: I morn the loss of the goofiness and fun that she was as a little kid, but you celebrate who she’s becoming. So, it’s a very complex thing.

One of the things that John Lasseter recognized early on was the fun of seeing inside different people’s heads, which obviously we took some advantage of, but it just got so complex. In a world of just going inside one person’s head took like five years to sort out. If we were then going to go into multiple different siblings and deal with all them at the same time, it was too much to deal with. So we took out the older brother and the younger brother.

Which works, because there’s a definite feeling that she’s alone.

And that was something that took some time to work out, but the emotional punchline is sadness being brought forward and being the thing that connects them; that really got emphasized by the fact she was kind of off by herself as her parents are both busy and setting up their lives.

Speaking from experience, without siblings, your friends really are your only real human connection. Parents don’t really count in the same way.

And then at that age! That’s the age where if you watch little kids and they are running up to strangers going, “Do you want to be my best friend? Okay, come on, let’s go.”

It should still be that easy.

I know! But by the time you turn 11, it’s like, “Uh oh, this kid might judge me. He might hate me.” So there’s this nervousness and fear that creeps in.

How do you pitch a story like this? It sounds complicated, as an idea. Especially when thinking about kids that might see it.

But the studio wants families to come.

Well, yeah, sure. I think the way the movie is, they sort of appear in layers. So, you’re looking for certain things at the beginning. I think when I pitched it, it was something like, “What if we had an 11-year-old girl, but she’s actually the setting. Because inside her head are these emotions” … and that was about all we had, this concept of emotions as characters and getting to see inside the head and this world in there.

How many times during this process did you have to say something like, “Yes, it’s kind of like Herman’s Head, but not really?”

Zero. Because, at the time, until about four years in, I had never head of Herman’s Head. Somebody turned us on to it along the way and I think I looked at it somewhere on YouTube. But, the thing was that we did know about, growing up an animation nerd, there was this short film called Reason and Emotion that I had seen stills of. It wasn’t until years later that I actually got to see it. It’s the same kind of concept.

We spend most of the film in Riley’s head, then we start feeling emotions for emotions. It’s a strange dynamic how this all works.

That whole world was fun, right? That’s where we get to roll up our sleeves and go, “Okay, how do we make this new place?” And, again, this is something John Lasseter recognized in it pretty immediately, that we get to represent things that everybody has thought about, right? They are going to be familiar concepts to people like, “Why can’t I remember where I put my wallet?” Or, “Why is that song stuck in my head?” Those kind of concepts, but we are going to make them physical and real so they are at once completely familiar and, yet, utterly new… which is really rare.

Speaking of, there’s a recurring joke about a gum commercial jingle that Riley has stuck in her head. What was the real life inspiration for that?

Well, there are two or three different gum commercials. Big Red? Remember that one? There are a number of them.

Inside Out producer Jonas Rivera chimes in: I hate it! In Oakland, it’s on during baseball between every inning. I turn it off.

The most important thing with this movie, you accurately display how the mind of a cat works.

Who knows what’s going on? It’s a madhouse in there.