Jake Johnson On Why He’s The New Samuel L. Jackson In ‘Jurassic World’ 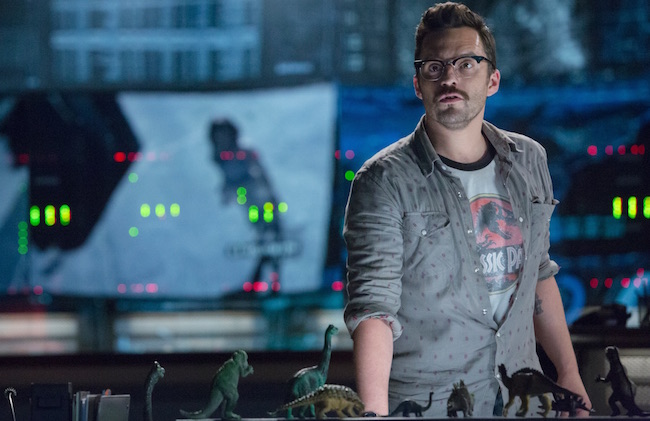 Johnson, maybe still best known for his role as Nick Miller on New Girl, is still an indie film guy at heart. He starred in Jurassic World director Colin Trevorrow’s first film, the Sundance favorite Safety Not Guaranteed, and when rumors started to swirl that Trevorrow was going to land Jurassic World, Johnson had already been tipped off that there just may be a part for him. (Johnson is still such an indie filmmaking fan, at the end of this interview he politely asked if he could plug his next small film, the Joe Swanberg directed Digging For Fire, which comes out this August.)

Ahead, Johnson relishes his time being able to compare himself to Samuel L. Jackson and he explains why he still hasn’t even seen Jurassic World.

I’m glad you’re in this movie.

If it were anyone else, I might be thinking your character would turn out to be evil, like Wayne Knight’s character.

I hope they didn’t first describe your character as “the nice Wayne Knight.”

No, you know, Colin actually gave it to me way cooler. He said, “You’re playing the part that Samuel L. Jackson did.” Because Wayne Knight was somewhat of the bad guy. If you remember, Wayne Knight goes off and messes with the dinosaurs…

Wayne Knight is the one who messes everything up.

Yeah. And Colin is like, “No, you don’t leave the control room. You’re my Samuel L.” That will be the first and last time Samuel L. Jackson and I ever play the same character. That’s one of those bucket list moments.

When you heard you weren’t leaving the control room, were you sad you wouldn’t be interacting with something that would one day look like a dinosaur?

Well, I’ll tell you, it was an interesting summer for me. I was looking to take a little bit of time off and Colin calls with this and I said, “Well, 100 percent, yes.” And then he said, “And the best part for you is you’re going to have a great major character in this movie and I will only need you for 13 days.” So, I had some personal stuff I had to take care of, and then I got to work with genuine good friends. And he said, “And the other part is we have an unbelievable cast and you get to work with everybody.”

You’re right, everyone does come into the control room.

I sit in my seat and then another incredible actor would come in and do a scene.

In my mind, I like to think that on the first day of Safety Not Guaranteed you told Colin, “If you ever somehow do a Jurassic Park movie, I want in.”

Well, the funny thing is, when we were doing it, I was the first guy who signed on to Safety Not Guaranteed … being a Colin Trevorrow player is a pretty cool place to be in.

So what happened first, that it was publicly announced that Colin was directing Jurassic World or you finding out you would be in it? Did he tell you before it was official that this might happen?

Well, I kind of knew that Colin was going to do something big after Safety. He was taking a lot of big meetings and pitching a lot of stuff…

There was the Star Wars rumor.

There was the Star Wars rumor, he was just in it. In the business, you start realizing who’s “in it” and who is “near it.” And Colin was definitely “in it.” For an actor, it’s always partially dependent. There has to be the right part for you — even if he really likes me, if there’s just not a part for me, there’s nothing you can do. And when he got Jurassic, he called and said, early on, “There’s a part of a tech guy who I want to be tonally different than the movie. I want it to be loose and light and I want people to care and there to be a fun romance. If this goes down, I want you to play that part.” So, I was crossing my fingers that it went down and when I got the call, honestly, I couldn’t be more excited.

The “fun romance” with Lauren Lapkus has a great payoff.

Without any spoilers, we actually shot that in a funny way. We shot it multiple different ways. Colin basically said as we were shooting all that stuff, “There’s a chance none of this makes it into the movie if it tonally doesn’t work.” So, we shot that with a kiss. We shot that where the kiss is romantic. We shot it where they just say goodbye to each other. He’s like, “We don’t know yet. We’re going to shoot a bunch of things and then I’m going to use this footage how I need it to make the rest of the movie play.”

Did you not find out until you saw the movie?

Well, I still haven’t seen it.

I can’t believe you haven’t seen it.

I don’t want to see it with like 14 people. So, all the screenings I could be are like with agents and managers and executives at a theater at Universal that’s one fourth full. That’s how I’ve seen most movie I’m in. I want to see this in a packed movie theater with people who are excited to see the movie so that I can listen to them react to it.

I see your point, but that takes a lot of patience. I’d be way too excited.

I know. But here’s the thing, I’m a poker player and in order to win at poker, you’ve got to have a little patience. So, I know there’s a big win with Jurassic World. I know I’m going to love it. I know it’s going to be great. If I see it in a small theater, it will be fun. But, if I see it in a packed theater when one of the dinosaurs jumps out and everyone screams together? I want it to be like one of those life moments. The first time I saw Let’s Be Cops, there were four people in the theater and I was like, “Eh, what a bust.” When I saw Drinking Buddies for the first time, it was Joe Swanberg, my wife and me on a computer in my old house. Then when I saw it at South by Southwest with a real audience, they reacted to things I didn’t react to and it’s like, “This is a way more fun experience.”

Do you remember watching Jurassic Park for the first time?

I’m not sure everyone today quite realizes what an experience that was the first time.

I know it sounds ridiculous, but we saw dinosaurs move around!

Did they let you keep the Jurassic Park t-shirt that you get to wear in the movie?

I didn’t! I’m starting to think that I need to request that thing.

That shirt is a weird dichotomy: In the movie, your character is admonished for wearing a shirt from a “tragedy,” but for the audience, it’s great to see that logo again.

Colin and I talked about it, and it was one of the last second editions… where we just thought that this character, Lowery, would have been a fan of the original park, but he never got to go to it because of the tragedy, but that’s why he’s working here.