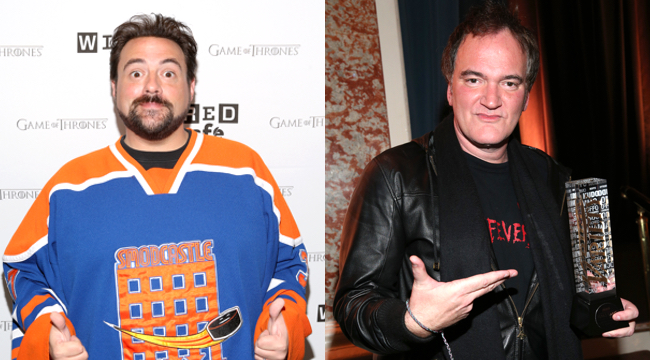 A new book called I Lost It At The Video Store features successful Hollywood directors who did time as video rental store clerks. These establishments are now as extinct as the Zanzibar leopard, but memories (and nightmares) remain intact. The book’s author, Tom Roston, revealed excerpts to Entertainment Weekly, and highlights include statements from erstwhile VHS peddlers Kevin Smith and Quentin Tarantino. These two gave enthusiastic speeches about how working as video clerks was far more enriching than film school.

The premise of the work is to illuminate the authentic Clerks life, and the directors fire off a series of rapid statements. QT waxes rhapsodic about how his Manhattan Beach video store “was the coolest place I had ever seen in my life.” Smith says he ended up behind a counter because he “looked terrible in slacks.” Tarantino thinks the store owner offered him a job because he was always there anyway. Whereas Smith says he found the “Cocoon of jobs” (sly) from a want ad. Quentin misses the days when “there was no Internet,” so he could commiserate with real people. And Smith was simply pleased that he could dabble in porn:

Quentin says he always went in for the hard sell with customers, although it seems silly that he focused so much on choice. Perhaps he had the long haul in mind, but with video rentals it’s all about the present experience. Sadly, this experience is nonexistent now, yet Quentin says he felt like a celebrity before his time:

“Me and the other guys would walk into the local movie theater and we’d be heading toward our seats and we’d hear, ‘There go the guys from Video Archives.’ We were known all over that town. In a strange way, Video Archives in Manhattan Beach was a primer to what it would be like to be famous. Everyone in Manhattan Beach knew who I was. I couldn’t walk down the street without people calling, ‘Hey, Quentin. Hey, Quentin!'”

Tarantino went on to discuss how, inevitably, he became disillusioned with suggesting movies after “I got to know everyone’s taste.” He said, “it got to be a real drag” once the mystery disappeared, so he made movies for other clerks to put in people’s hands. QT also continues to talk about how he was so “invested” that he once tried to organize “an employee takeover.” The tactic didn’t work, so he quit and became one of the more riveting directors in Hollywood. There’s a lesson there somewhere.