Kylo Ren, amongst other things, is a hoarder. But he doesn’t hoard dice or old-school lightsabers, or even, mugs from cantinas across the universe. It turns out Ben Solo’s dust pile, whose origins have been irking super fans attempting to dissect everything in The Force Awakens, is his favorite memorabilia. J.J. Abrams revealed exactly what the dust was that Kylo Ren slammed his helmet into as he was force-interrogating Rey in an interview with Entertainment Weekly, and it’s pretty dark. Kylo Ren likes to hoard the ashes of his fallen enemies.

It really makes you wonder what Han and Leia did to make this kid so morbid. Not even his grandpa would store the ashes of his enemies in a nice pile inside his living quarters.

“The backstory is, that that table has the ashes of the enemies he’s killed,” Abrams says. “That moment was actually shot for, and meant to be used in, the scene where he was talking to the Vader mask.” 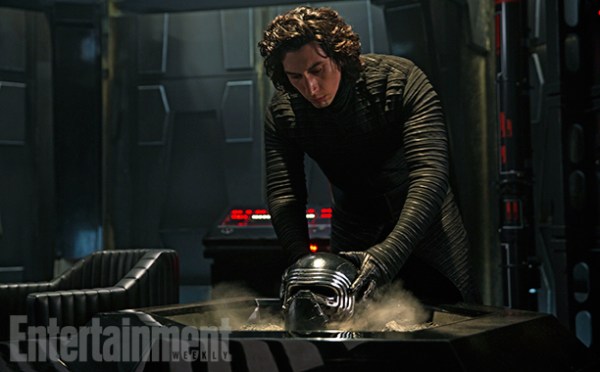 “He originally had his mask off the first time we shot that scene. Then we reshot it with his mask on, but we had that shot which I loved and thought was so cool of the mask being slammed down into that ash,” Abrams says. “So that shot was stolen from the scene that we had changed and put into the scene with Rey.”

It seems like, that a guy who for the most part was struggling with the light inside him, wouldn’t be taking his fallen enemies then systematically breaking them down into dust. Even from a purely pragmatic standpoint, it seems like a waste of time and energy, but Supreme Leader Snoke works in mysterious ways. And you have to admit, knowing what that dust is makes him far more menacing. Will he ever be redeemed?

Now Watch: All The Ideas That Were Left Out Of ‘Star Wars: The Force Awakens’