The 2020 Movie Moments That Brought Us Joy

To call 2020 a “difficult year” would be an understatement. It’s been the kind of year that our grandkids will ask us about decades from now, and there’s still a half-month to go! But instead of focusing on the bad things that have happened in 2020, I’m choosing to pay attention to the good stuff, like the movie moments that brought me joy. Because there are a lot of them, even in a year when many movies were delayed until 2021 or beyond. It could be a song, a line, or a future-Batman failing to have even a stoner’s understanding of cooking pasta. These are my most joyful movie moments of 2020. (I would have done one for TV shows, but that list begins and ends with “Jackie Daytona.”)

The police station scene in Birds of Prey

It’s going to be a tough trivia question in five years time: what was the highest-grossing superhero movie of 2020? The answer: Birds of Prey (and the Fantabulous Emancipation of One Harley Quinn), or as it was (unofficially?) retitled, Harley Quinn: Birds of Prey. It’s an unexpected designation because the film was considered a box office disappointment when it was released. But because there were basically no other superhero movies in 2020, as Marvel pushed Black Widow and Eternals to 2021 and DC’s Wonder Woman 1984 is being released on HBO Max, it finished number one. Cathy Yan’s Birds of Prey deserves a better reputation than “won by default,” though. It’s a fun, feminist movie with a Looney Tunes-esque manic energy and fantastic performances from Margot Robbie, Ewan McGregor, Jurnee Smollett-Bell, and Mary Elizabeth Winstead; it’s also gleefully violent, as opposed to morbidly TwIsTeD, as seen in the police station scene. We need more glitter-filled bean bag guns, not actual guns. Birds of Prey is colorful when most superhero movies are painted the same drab grey.

The oily cakes in First Cow

Just as it’s impossible to watch Goodfellas and not want Italian food, it’s equally unthinkable to finish A24’s First Cow without pausing to find the recipe for oily cakes. The fried donut-looking cakes are made and sold with tenderness by Cookie (John Magaro) and King Lu (Orion Lee) in 1820s Oregon with stolen milk provided by Eve, the Paddington of cows. They taste “like something my mama made” is how one consumer describes them, the greatest compliment of all. (They’re a rare treat in the movie, but lucky for us, writer-director Kelly Reichardt and her co-writer, Jonathan Raymond, shared the recipe here; also lucky for us, we don’t live in the 1820s.) Every scene with Cookie’s oily cakes brings me joy; no wonder First Cow is my favorite movie of the year.

Now we come to the music portion of the post, beginning with the song that was stuck in every Netflix’s subscriber head in July. “Jaja Ding Dong” is as perfectly (and intentionally) stupid as “Please Mr. Kennedy” from Inside Llewyn Davis, and just as catchy. As our own Brian Grubb pointed out, “It burrows in there with its little teeth and claws and hooks itself to particularly sturdy parts of your brain. It’s not so much an earworm as it is an eartick, holding on for dear life as you try to pluck it out of there.” My love for “Jaja Ding Dong” is growing wide and long. In a post-COVID world, every bar band (the members can be humans or elves) should be legally required to play it. The crowd would go nuts.

And every time they play something other than “Jaja Ding Dong,” this will be me:

“Everybody Wants to Rule the World” in Tesla

I won’t lie: I haven’t seen Tesla. But here’s what I know about the sort-of biopic. Tesla stars Ethan Hawke as Nikola Tesla, and at one point, Hawke-as-Tesla sings “Everybody Wants to Rule the World” by Tears for Fears. That’s all that matters. I’ve watched this scene on YouTube at least seven times. My favorite thing about the video, other than the star of the Before trilogy karaoke-crooning the best Tears for Fears song (I stand by), is the description: “Best scene from a rather dull movie.” Again, I haven’t seen Tesla, but even if it was a masterpiece, this would still be the best scene in the movie.

The AV Club called it the best movie scene of 2020. It’s tough to disagree. Set at a house party in 1980s West London, Steve McQueen’s Lovers Rock is musical euphoria, a joyous 70-minute tribute to the power of communal dancing and singing. That’s never more apparent than in the scene where Janet Kay’s 1979 hit “Silly Games” plays in its eternity — there are sharp-attired men and beautifully-dressed women, there’s swaying, there’s sweat, there’s consensual butt-grabbing. It’s sex on the dance floor. It’s pure joy.

The backyard scene in Palm Springs

Palm Springs was the only film to appear on every submitted list for our top-10 movies of 2020 post. The Hulu comedy, starring Andy Samberg and Cristin Milioti, clearly brought a lot of people joy in 2020, even with the long stretches of suicide and depression and Samberg getting (politely!) murdered by J.K. Simmons with a crossbow in a trash can. But a few minutes before the garbage-murder, Simmons delivered a line that had me dying. In a good way. It might be the hardest I laughed at anything in a movie this year. 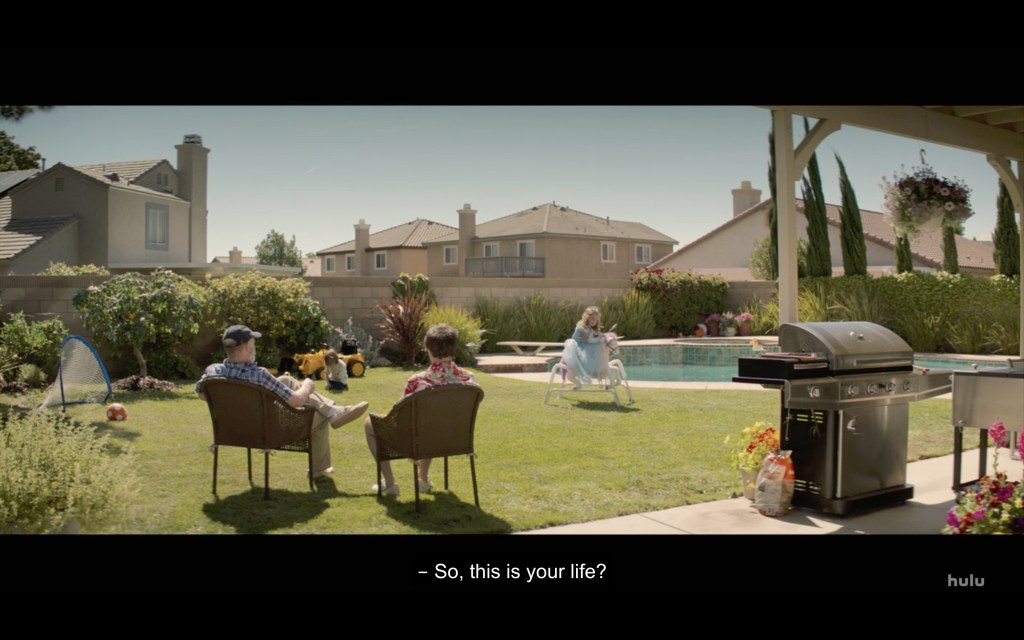 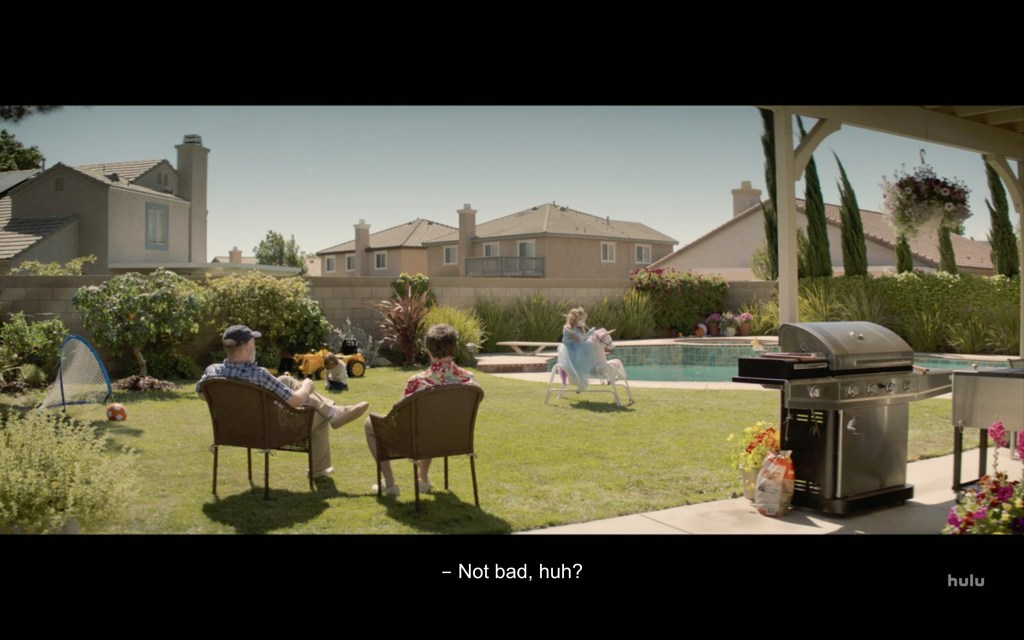 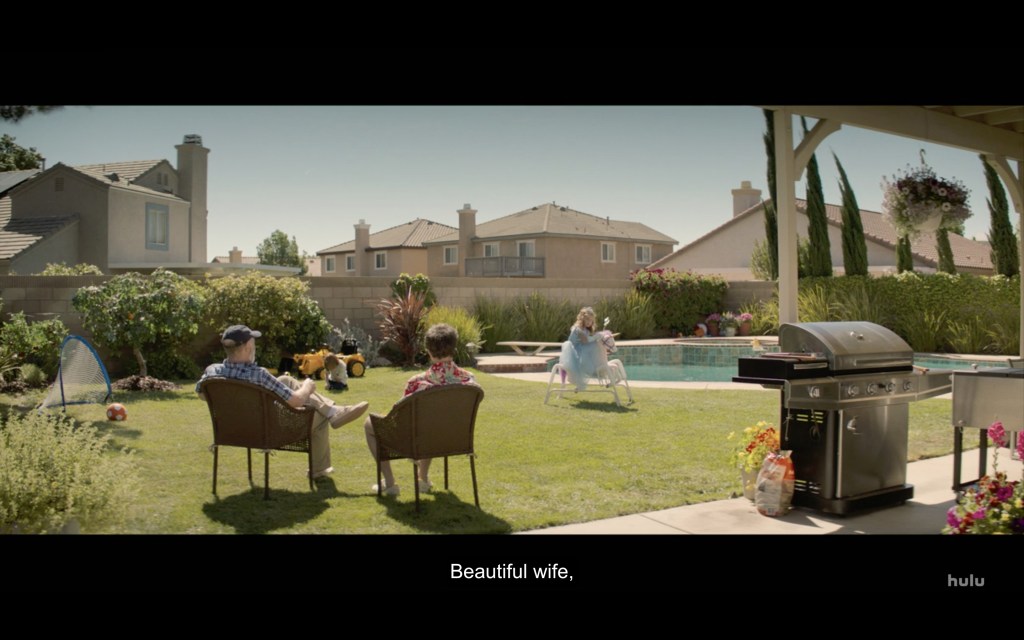 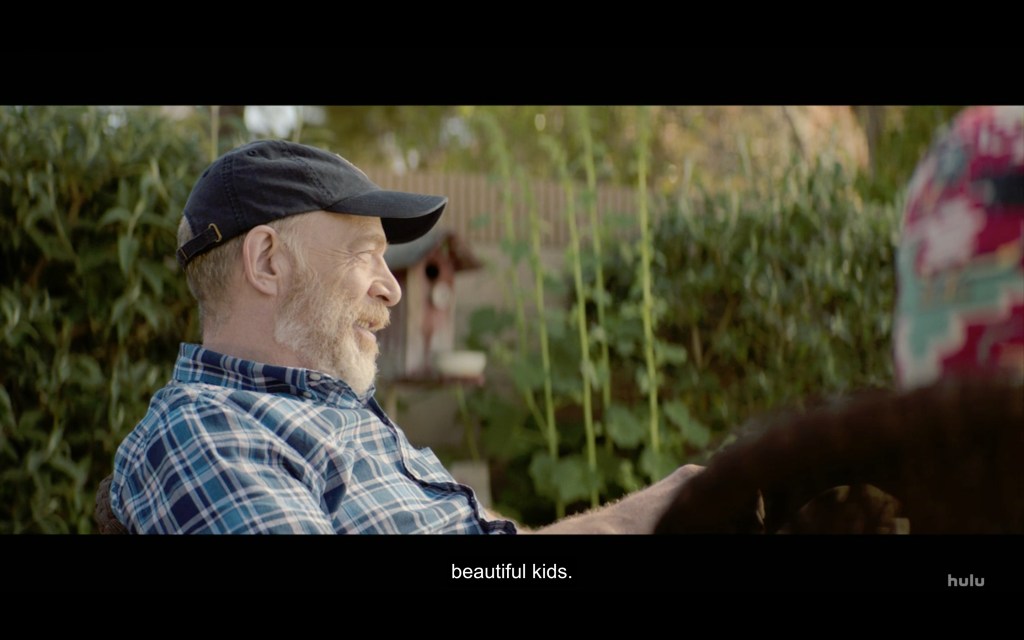 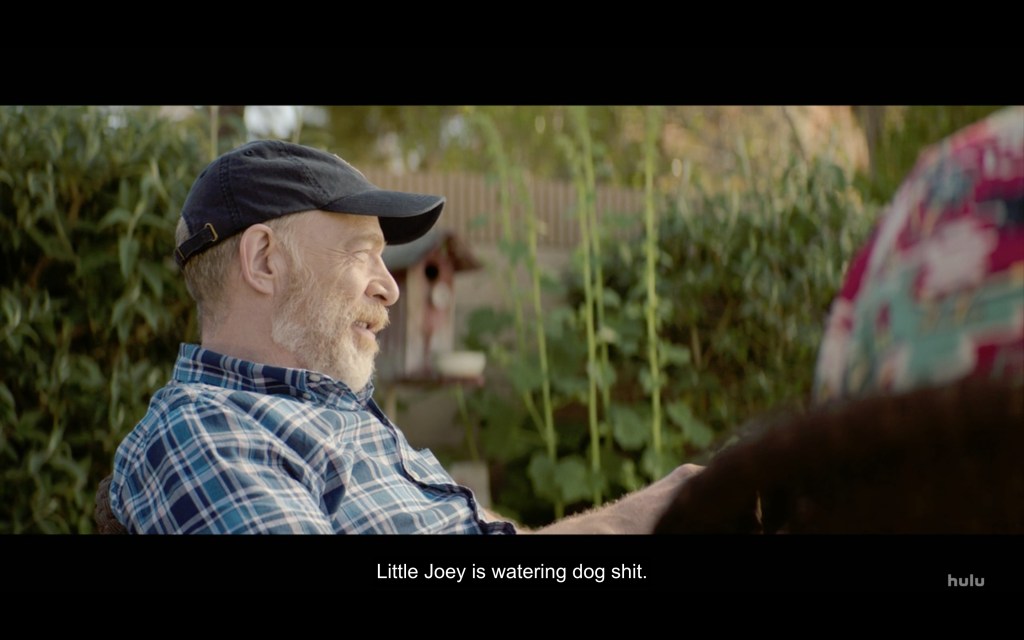 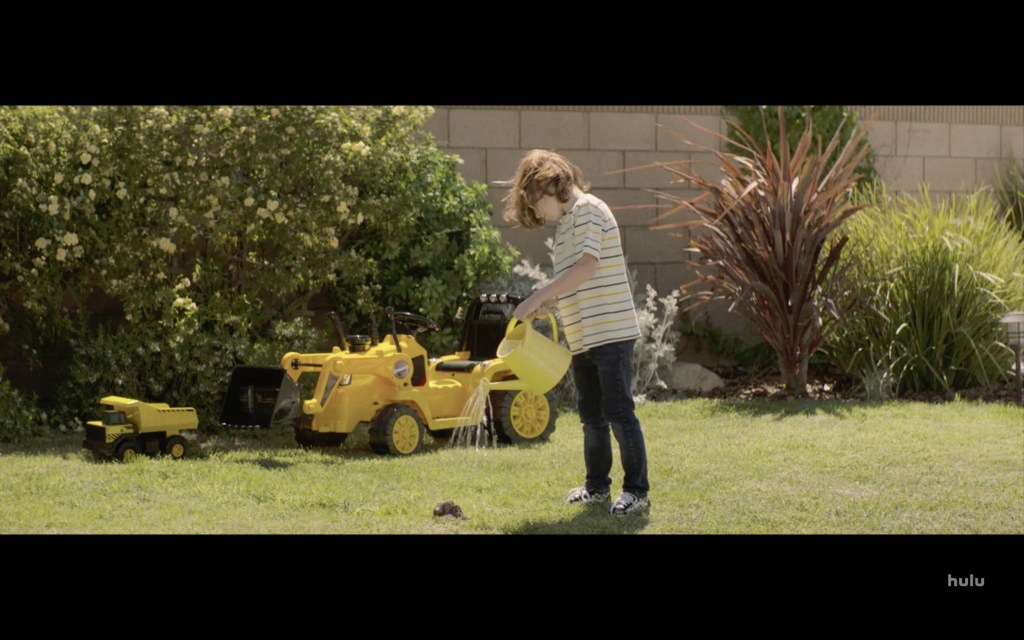 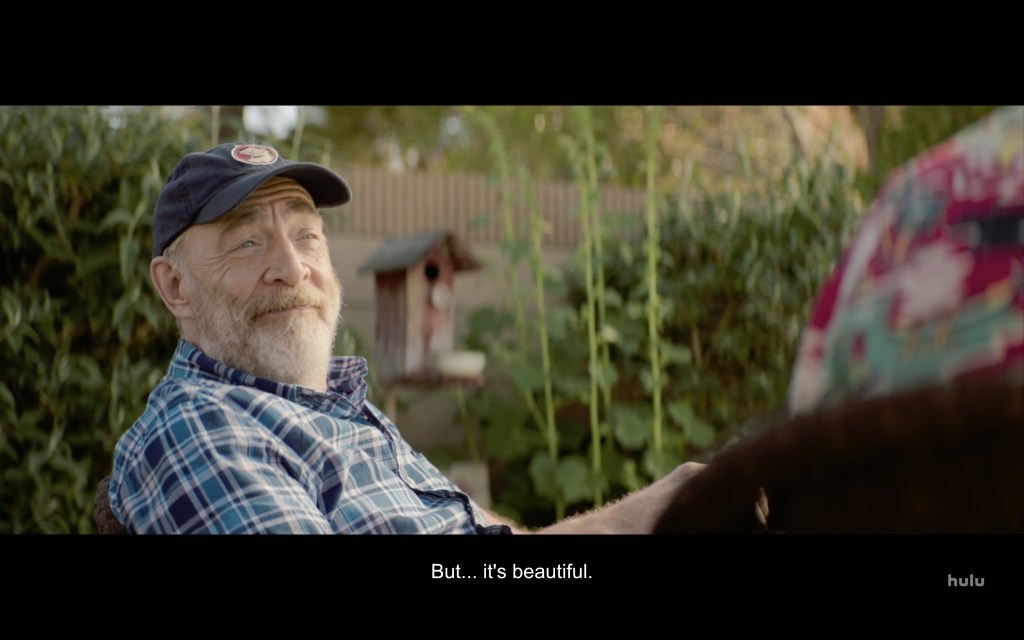 The long take in The Vast of Night

Maybe “joyful” isn’t the first word that comes to mind to describe the long take in The Vast of Night, a science-fiction mystery movie set in 1950s New Mexico about two teenagers, disc jockey Everett and switchboard operator Fay, who hear a mysterious frequency on the radio. “Technical marvel” is more accurate. But as the camera moved from Fay’s switchboard through the small-town streets to the high school gymnasium where a basketball game is being held to the radio station, all in one uninterrupted four-minute shot (it’s actually four long takes stitched together to look like one), I felt slack-jawed joy. It’s “pure awesome-ness.” Expect big things from director Andrew Patterson.

“He’s not my boyfriend” in The Old Guard

“What is he? Your boyfriend?”

“You’re a child. An infant. Your mocking is thus infantile. He’s not my boyfriend. This man is more to me than you can dream. He’s the moon when I’m lost in darkness and warmth when I shiver in cold. And his kiss still thrills me, even after a millennia. His heart overflows with the kindness of which this world is not worthy of. I love this man beyond measure and reason. He’s not my boyfriend. He’s all, and he’s more.”

The forest running scene in Wolfwalkers

Wolfwalkers only came out on Apple TV+ last Friday, but I would recommend watching it immediately. The gorgeous animated film from Tomm Moore, who also directed The Secret of Kells and Song of the Sea (both of which were nominated for Best Animated Feature at the Oscars), is about a young girl living in mid-1600s Ireland who befriends a “wolfwalker,” a human who transforms into a wolf when she’s sleeping. I hesitate to say too much about the plot — there are no “twists,” per se, but I don’t want to spoil any of its many charms — but there’s one scene that plays like a mashup of “Can You Feel the Love Tonight?” and “Hakuna Matata” from The Lion King that’s extraordinary to behold.

OK, this technically isn’t from a movie and I could have given the slot to Radha rapping for the first time in The 40-Year-Old Version, or any of Anya Taylor-Joy’s reactions in Emma, or Jim Carrey dancing in Sonic the Hedgehog, or NoHo Hank as an insecure robot named Dennis Caleb McCoy in Bill & Ted Face the Music. All good, but few things in 2020 brought made me happier than Robert Pattinson’s pasta shenanigans. If you’ll recall (and please do recall), Pattinson told GQ that during quarantine, he went “on YouTube to see how to microwave pasta… Put it in a bowl and microwave it. That is how to microwave pasta. And also it really, really isn’t a thing. It’s really actually quite revolting. But I mean, who would have thought that it actually makes it taste disgusting?”

It gets worse (better).

I watch as he pours dry penne into a cereal bowl, covers it with water, and places it in the microwave for eight minutes. He says using penne is already new territory for him. Usually he uses… well… “Do you know the pasta that’s, like, a little, it’s like a blob, a sort of squiggly blob?”

“No, no, no, no, it looks like—what would you even call it? It looks like a sort of messy… like, the hair bun on a girl.”

“I have literally no idea what you’re talking about,” I say.

“There was one type of pasta that worked. It definitely wasn’t penne.”

The pasta recipe involves cheese, cornflakes, a horrendous amount of sugar, and putting tinfoil in the microwave. As GQ‘s Zack Baron wrote, “Proudly, [Pattinson] is walking back toward the counter that his phone is on when, behind him, a lightning bolt erupts from the oven/microwave, and Pattinson ducks like someone outside has opened fire. He’s giggling and crouching as the oven throws off stray flickers of light and sound.”

Robert Pattinson is a maniac, and we love him for it. Thank you for all the joy.