‘Pixels’ Is Adam Sandler’s Best Movie In Six Years, Which Isn’t Saying Much 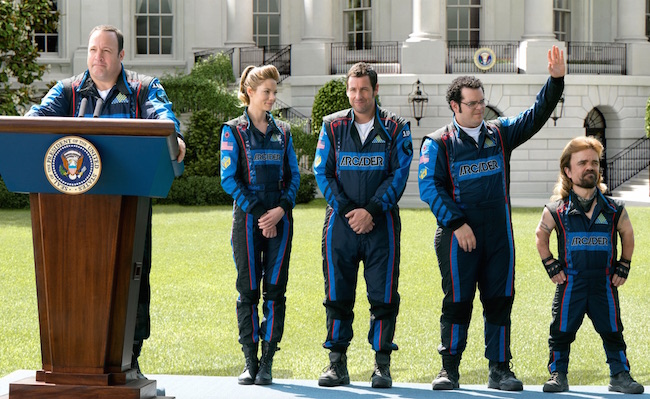 Pixels is Adam Sandler’s best movie in six years. There’s a statement that is at the same time true and yet means nothing. So, yes, since the release of 2009’s Funny People, Pixels manages to be better than Grown Ups, Just Go With It, Jack and Jill, That’s My Boy, Grown Ups 2, Blended, and The Cobbler*. That’s quite a streak of cinematic sorrow, but this is where we are at with Sandler; a place where, in comparison, a movie like Pixels can be heralded in a, “Hey, this is watchable at times,” sort of way.

*Not included in my definition of an “Adam Sandler movie” is the animated film Hotel Transylvania and the true ensemble film, Men, Women & Children.

Keep in mind, this is being written by someone who has held out hope for Sandler for many, many years, then finds himself writing the same tired “When will Adam Sandler be good again?” piece every time he releases a new movie. Punch Drunk Love is 13 years old. It’s well past time to move on. It ain’t happening.

The problem is, I let myself get fooled by the “schlubs battle aliens that look like classic arcade games” premise of Pixels, something that kind of seems like it might be the perfect vehicle for Sandler. Throw in the fact that Pixels is directed by Chris Columbus, as opposed to one of Sandler’s cronies – Dennis Dugan has directed pretty much all of Sandler’s bad movies – and, well, I found myself getting my hopes up again. The problem is, Sandler can still be a likable and empathetic actor, but if he’s given any creative control, it will bring the movie down because Sandler’s sense of humor over the years has become terrible. (I don’t think it’s malicious, I just think his humor has become bad. I actually believe him that, in his mind, he thinks the jokes in The Ridiculous Six aren’t offensive to Native Americans. The problem is that they very much are offensive.)

The thing is, Pixels isn’t anywhere near a total disaster. It’s competent at times – especially when the film is focusing on the action of fighting classic arcade characters – it just seems like a movie that should easily be a lot better. And it would have been if this was truly a Chris Columbus movie, but it’s instead an obvious collaboration between the two because, for every competent Columbus shot, there’s a dumb Sandler moment to counter it. For every well-staged action sequence, it’s followed by something dumb, like a Dan Patrick cameo.

Pixels begins in 1982 (this is a very well shot sequence that somehow actually looks like it was filmed in 1982) where we meet young arcade game champions Sam Brenner, Will Cooper, Ludlow Lamonsoff and Eddie Plant (who will all grow to be played by Sandler, Kevin James, Josh Gad and Peter Dinklage). The footage of that tournament is then shot into space, as some sort of good will time capsule, where it’s eventually intercepted by aliens who interpret it as a threat.

In 2015, Brenner (Sandler) is a Washington, D.C. area based Geek Squad-type employee who is installing a new video game system at the home of Violet van Patten (Michelle Monaghan), a recent divorcee who Brenner finds drinking by herself in her closet. This might be the most unintentionally awkward scene I’ve witnessed in a movie this year.

Will Cooper (James) is somehow the President of the United States (you will never get used to this) and summons his old pal Brenner to the White House to look at some footage of a recent attack on a U.S. military base in Guam because, sure. Look, I get that this is a movie about arcade game characters attacking Earth, but the speed at which everyone in this movie accepts that this is what’s happening is startling. Basically, Brenner confirms to Cooper, “That’s Galaga attacking us,” Cooper agrees, then they address the U.S. military war room to come up with a plan to fight the Bally-Midway inspired invaders. It’s all one big shrug emoticon.

Speaking of that war room, at it turns out, Violet van Patten is a Lieutenant Colonel in the military and is now in charge of Brenner’s group, which includes the now conspiracy theorist Ludlow Lamonsoff (Gad) and, eventually, their old rival, Eddie Plant (Dinklage).

While watching this movie, it’s almost as if the agreement is that Chris Columbus got to be in charge of the action sequences – which, again, are actually a lot of fun – and Sandler got to be in charge of “the comedy.” Because when Pixels isn’t focusing on its battles with Pac-Man, Donkey Kong and Centipede, it feels like a lot of other bad Sandler movies that have come out over the last few years.

I hate doing the “if only this movie starred someone else” game, but when I picture this movie starring, say, Seth Rogen instead of Sandler, all of a sudden, a lot of the problems go away. We wouldn’t have to shoehorn Sandler’s buddy Dan Patrick into the movie. We wouldn’t have to include Sandler’s bad jokes. Instead, we would just have a fun summer action-comedy with a kind of clever idea about old video games. I mean, this really should have been easy. But it’s never easy with Adam Sandler.